The Governor, joined by representatives of the Port Authority of New York and New Jersey and LaGuardia Gateway Partners (LGP), the private consortium rebuilding and operating LGA's Terminal B, unveiled the 250,000 square-foot light-filled new concourse, which houses a total of 18 gates which will be occupied by Air Canada, American Airlines, Southwest Airlines and United Airlines.

"The opening of the first new concourse and gates at Terminal B marks another significant milestone in the transformation of LaGuardia Airport into a modern, global gateway that is worthy of the State of New York," Governor Cuomo said. "While leaders in Washington only talk about investing in infrastructure, in New York we are actually getting it done, and now travelers from across the world will start to see and experience a whole new LaGuardia."

"The transformation of LaGuardia Airport is part of New York's efforts to modernize our airports and improve the travel experience," said Lieutenant Governor Kathy Hochul. "The opening of the new gates at LaGuardia will bring additional dining and retail options highlighting the great local products New York has to offer. The first new concourse is the start of the overall renovation of the airport that will turn it into a 21st century transportation hub for travelers, continuing to grow the economy and tourism industry."

The first new gates represent another step forward in the complex, multi-phase construction plan designed to enable the 30-million passengers-a-year airport to remain fully operational while the entire airport is rebuilt. Under the plan, old facilities are demolished only as new facilities are completed, ensuring the airport never loses capacity.

More than a dozen concessions in the new concourse include appealing, New York-inspired food, beverage and retail options - with the ability for passengers to have food delivered directly to their gate. Restaurants include popular New York establishments such as Shake Shack, La Chula, Osteria Fusco, Kingside and Irving Farm Coffee. Retail venues include an FAO Schwarz toy store, McNally Jackson independent bookseller and District Market, which includes 'Made in Queens' products through a partnership with the Queens Economic Development Corp.

Governor Cuomo first unveiled the vision for a comprehensive redevelopment of LaGuardia Airport in 2015, and the project broke ground in 2016. When completed, the new 2.7 million square foot LaGuardia Airport will be the first new airport built in the U.S. in more than 25 years.

While leaders in Washington only talk about investing in infrastructure, in New York we are actually getting it done.

The new airport will comprise $8 billion in new facilities. On the western side of the airport, the new $4 billion Terminal B is replacing the obsolete terminal that opened more than 50 years ago. The terminal will have a total of 35 gates, including the first 11 opening this weekend and 7 more coming into service in early 2020. Dual pedestrian bridges will rise over active plane taxi lanes, connecting the main departures and arrivals hall that will open in 2020 with the two island concourses, offering travelers views of the Manhattan skyline as they head to and from their gates.

On the eastern side of the airport, Delta Air Lines' new $4 billion Terminal C, which broke ground in August 2017, will ultimately comprise a total 37 gates. The new Terminal C will replace the existing Terminals C and D and is scheduled to open in 2021.

LGP and Delta are privately financing two-thirds of the redevelopment's costs, and the Port Authority has committed the remaining one-third - most of it for overhauling and simplifying the current labyrinth network of on-airport roadways.

The new arrivals and departure halls will be located closer to the Grand Central Parkway than the existing terminals, increasing the size of the airfield and allowing for dual taxiways to reduce gate congestion, while also enabling larger gate areas to more efficiently accommodate modern aircraft. State-of-the-art security technology will be integrated from curb to gate.

This year has been critical for the project as progress has accelerated. In February, the new Terminal B parking garage opened with 3,200 spaces, including more than 2,400 for personal vehicles. A dedicated level for Uber, Lyft and other car services provides 50 clearly marked loading areas for passengers to meet their drivers inside, protected from the elements.

In July, Governor Cuomo opened a new flyover to LaGuardia Airport from the Grand Central Parkway's Eastbound Exit 7, the primary roadway or overpass for vehicles accessing the airport. This flyover was the first and most important of 26 new bridges to improve traffic flow at the airport, with 15 existing old or obsolete bridges scheduled to be demolished by mid-2021. The new roadway network will also feature 16 fewer traffic lights.

In September, the Port Authority commenced the formal environmental review for the proposed AirTrain LGA, which would provide a critical rail link to the airport at Willets Point via the Long Island Rail Road and 7 subway line. The proposed route would provide a reliable trip to LaGuardia from Midtown Manhattan in less than 30 minutes at a time when travel times by car continue to increase and become more unpredictable due to congestion.

Overall, the redevelopment of LaGuardia is anticipated to create a combined $10 billion in economic activity and $2.5 billion in wages over the life of the project. To date, the airport redevelopment, including both terminal projects, has issued more than 750 contracts valued at more than $1 billion to certified Minority- and Women-Owned Businesses, advancing New York State's nation-leading utilization rate of MWBEs and a testament to its unparalleled network of MWBEs. Additionally, a total of 259 local residents have been hired to work in the new Terminal B concourse, with more than 50 percent of those employees residing in Queens. 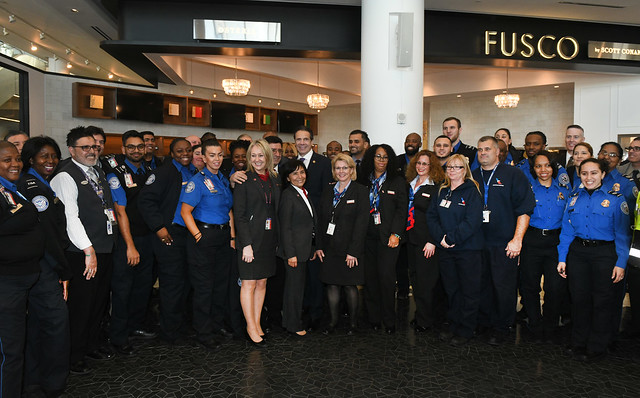 Port Authority Executive Director Rick Cotton said, "For too long, LaGuardia Airport has offered its passengers a substandard experience, but this weekend's opening of the first new concourse shows the Port Authority is committed to improving the passenger experience with world-class facilities that turn's Governor Cuomo's vision into a beautiful reality. And we are undertaking this comprehensive rebuilding of LaGuardia Airport while continuing full daily operations and serving record numbers of passengers."

Congressman Joe Crowley said, "LaGuardia Airport is an essential component of New York's economy and visitors' first impression of Queens. By transforming this gateway to the city and state into a world-class airport, we are providing a top-notch experience for anyone traveling to New York for business or pleasure. I thank Governor Cuomo for making this a top priority of his administration and look forward to seeing the completion of this critical project."

Assemblyman and Speaker Pro Tempore Jeffrion Aubry said, "Governor Cuomo has consistently made significant investments in New York's infrastructure, and today is yet another example of this administration's leadership. These upgrades to LaGuardia Airport will make a real difference in the lives of New Yorkers and provide a world-class experience to those who travel to our state. I thank Governor Cuomo for his continued investments in the future of New York."

Queens Borough President Melinda Katz said, "As project after project is completed, the once outdated facility is transforming LaGuardia Airport into a world-class, 21st century transportation hub. The new gates will not only ease passenger travel, but they will also offer the amenities that all visitors have come to expect at international airports today. Queens lauds Governor Cuomo for committing to this massive undertaking and for spurring economic growth through new jobs and opportunities brought on by this project."

Mario Cilento, President of the New York State AFL-CIO said, "Today's milestone in the LaGuardia reconstruction project is another example of Governor Cuomo's ability to follow through on his vision and promise to bring state-of-the-art transit plans to our great state. This project has already provided hundreds of working men and women solid union jobs and will continue to grow the middle class in the future."

Building & Construction Trades Council of Greater NY President Gary LaBarbera said, "Ever since Governor Cuomo first unveiled his plans to transform LaGuardia Airport, the ongoing construction has provided quality union jobs to New York's hardworking men and women who are proud to take part in building the first new airport in this country in two decades. The Building and Construction Trades Council of Greater New York looks forward to seeing this project through to completion, in order to continue bringing solid middle class careers to New York construction workers while transforming LaGuardia Airport into a world-class transportation hub."

Partnership for New York City President and CEO Kathryn Wylde said, "Governor Cuomo's continued investment in New York's infrastructure is stimulating economies across the state at a time when building and new construction has stagnated throughout the country. Just one of many ongoing projects, the transformation of LaGuardia Airport is a signal to all New Yorkers that we will not stand still, we will not stop growing, and we will not stop doing what is best for the people of this state. With the opening of 11 new gates and continued progress at the airport, LaGuardia is poised to encourage additional visitors to travel through this hub, and provides passengers with the very best amenities to ensure seamless travel to and from their destination."

Carlo A. Scissura, President & CEO of the New York Building Congress said, "Today's announcement represents another victory for New York infrastructure. Not only will Governor Cuomo's bold plan to transform LaGuardia improve the travel experience for visitors to New York by offering world-class amenities, it has contributed significant job and business opportunities for New Yorkers. I commend Governor Cuomo for his leadership and showing that New York can get the job done."

Mitchell Moss, Director, NYU Rudin Center for Transportation, said, "For decades, the Port Authority neglected LaGuardia Airport. But Andrew Cuomo has done what no other Governor has done: he has modernized and transformed LaGuardia Airport. This will strengthen the city, region and the nation, reinforcing its role as the airport that connects the New York region to the nation."

Chairman of Meridiam North America and LaGuardia Gateway Partners Board Member Jane Garvey said, "We're building a completely new, unified airport that will be a leader in innovation and a model for redevelopment projects across the country. From advancements in technology to iconic NY shops and restaurants, the new LaGuardia is delivering for New York. Meridiam is proud to join today with LaGuardia Gateway Partners and Governor Cuomo to celebrate our continued progress at Terminal B and create an exciting future for the city."

Chief Executive Officer of LaGuardia Gateway Partners Stewart Steeves said, "The opening of the new eastern concourse at Terminal B is just the first step in creating an elite-level experience for LaGuardia's passengers and realizing Governor Cuomo's vision of a unified 21st century airport. From best-in-class retail and food options, to innovative design, family-friendly spaces, and modern amenities, we're honored to work with both the Governor and the Port Authority to reimagine LaGuardia, transforming Terminal B into a gateway New Yorkers can be proud of."

Skanska USA President and CEO Richard Kennedy said, "The opening of the eastern concourse of Terminal B marks the biggest milestone to date in Governor Cuomo's historic vision to transform LaGuardia into the 21st-century airport New York has long deserved. The top-to-bottom rebuilding of one of the nation's busiest airports - all while continuing to operate it around-the-clock - is one of most complex projects Skanska has ever led. We take great pride in being a part of the development and construction of the new LaGuardia, which is as much about creating a world-class passenger experience as it is providing a model for responsible and sustainable infrastructure for years to come."