Under Governor’s Tuition-Free College Proposal, 10,500 Families in City of Rochester and 55,750 Families in the Finger Lakes Region Would Be Eligible

Governor Highlights More Than $1.3 Billion in Strategic Investment in Finger Lakes Region Since 2011

Governor Andrew M. Cuomo today announced a number of regional highlights for the Finger Lakes as part of the proposed FY 2018 Executive Budget. The Budget builds on the state’s fiscal discipline over the last six years while strengthening the middle class, reducing taxes, and making smart investments in New York's future. For the seventh consecutive year, the Budget is balanced and holds spending growth below two percent.

From investing $20 million in a new REMADE Institute at RIT and developing a state-of-the-art welcome center to providing $20 million to advance the creation of supportive housing in Rochester and launching a new craft beverage week to showcase the state’s world-class beer, wine, cider and spirits – the Executive Budget builds on key accomplishments and keeps the Finger Lakes region moving forward for decades to come. More information on the FY 2018 Executive Budget is available here.

"This year’s budget will drive growth across the Finger Lakes by helping the middle class and advancing our progressive values, all while continuing our record of fiscal discipline. From making college more affordable and revitalizing our infrastructure, to cutting the cost of prescription drugs and doubling the child care tax credit, the budget drives smart economic growth and generating opportunity throughout the region,” Governor Cuomo said. “These sweeping investments will grow good-paying jobs, improve access to high-quality education, and protect our environment – creating a brighter, stronger Finger Lakes for all.”

Highlights of the FY 2018 Executive Budget:

These sweeping investments will grow good-paying jobs, improve access to high-quality education, and protect our environment – creating a brighter, stronger Finger Lakes for all.

Under the Governor’s FY 2018 Executive Budget, New York will transform the Geneva visitors’ center into a state-of-the-art Finger Lakes tourism hub. The 5,500 square foot Geneva Welcome Center will undergo a transformation of its interior and guide travelers in maximizing their experience in the region. The welcome center will feature I Love NY Kiosks with videos and directions to the Finger Lakes renowned tourism destinations as well a Taste NY gift shop showcasing wine, beer, cider and spirits sourced from across the Finger Lakes. To pay tribute to the Finger Lakes hometown and historical heroes, the state will also build a walk of fame leading up to the new welcome center, including George Eastman, Frederick Douglass, Susan B. Anthony, Elizabeth Cady Stanton, Philip Seymour Hoffman, Abby Wambach.

The new Geneva Welcome Center will also include the following world-class features:

The new Finger Lakes Welcome Center is expected to open in fall 2017. The state will also invest $5 Million as part of I Love NY Campaign to promote Finger Lakes wine.

To advance Rochester's anti-poverty initiative, the state will be allocating $20 million for the creation of supportive housing for the city as part of a memorandum of understanding. In 2016, Governor Cuomo put forward a sweeping $2 billion blueprint to combat homelessness and advance the creation of 1,200 units of supportive housing across New York State. The new units will provide an array of services for vulnerable individuals, including employment training, counseling, and assistance in obtaining and maintaining primary and mental healthcare.

The funding will work to ensure all New Yorkers have a safe, affordable place to call home and build on the state’s efforts to combat poverty in the Finger Lakes region. These efforts will augment the nearly $16 million in funding the Governor announced last year to support and grow three Rochester-based projects aimed at reducing poverty, including:

Together, these initiatives will advance a holistic, integrated approach to alleviating poverty in the region – building new units of supportive housing, developing cradle-to-career workforce readiness initiatives and advancing "Pathways to Prosperity" for all. 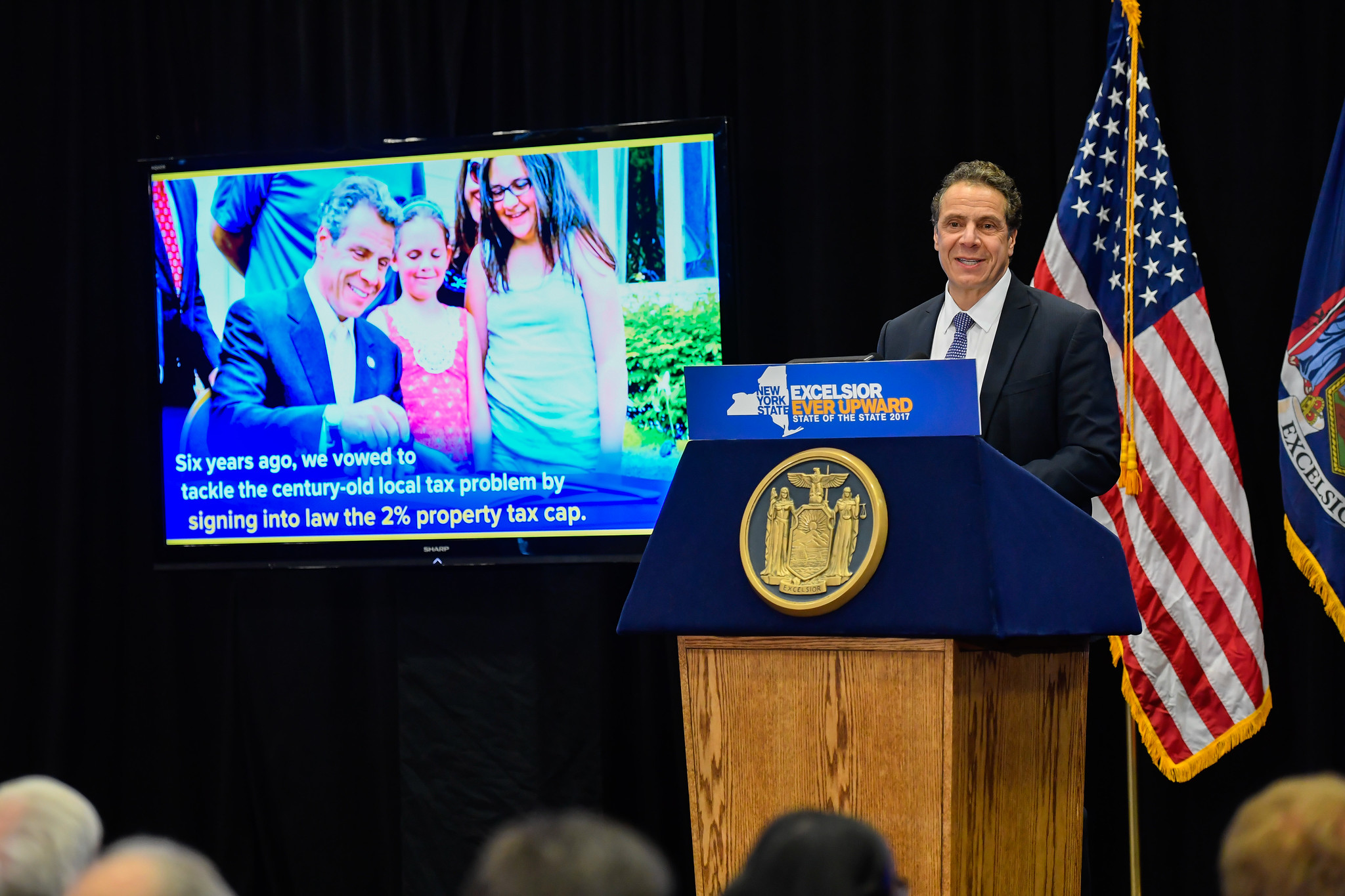 New York State has committed to providing $20 million to support the creation of the Reducing Embodied-Energy and Decreasing Emissions (REMADE) Institute. The state-of-the art research hub will focus on developing clean energy technology, including waste reduction and recycling.

The Golisano Institute for Sustainability at the Rochester Institute of Technology was chosen last week to lead this national effort by the U.S. Department of Energy, part of the agency’s Manufacturing USA initiative which is working to find green manufacturing solutions.

RIT was tapped to take the lead on the project by the DOE thanks in large part to the multi-million dollar commitment from New York State. Empire State Development will allocate the $20 million for the initiative over five years.

The program is modeled on the cutting-edge 43North initiative which has seen widespread success in attracting new and emerging companies and top talent to Western New York. Like 43North, the winners of the Photonics Venture Challenge must commit to locating in the Rochester region for at least one year after the award.

The Photonics Challenge will include a panel which will select 10-15 startups to receive $125,000 each, and the most promising business incubator will be awarded a $1 million grand prize. There are currently no accelerator programs in the world with a photonics focus and the Rochester region is uniquely poised to build a nationally, or globally, recognized program.

The basic elements of the Photonics Venture Challenge are as follows:

Launching Craft Beverage Week
As part of the FY 2018 Executive Budget, Governor Cuomo proposes a statewide promotion week that will emphasize the diversity and quality that New York’s craft beverages. The New York Craft Beverage Week introduces Upstate producers to the one of the world's largest markets: New York City. Each of the Finger Lake region's more than 200 producers are invited to showcase their products during a week in September with the industry's leading restaurants and distributors.

During the week, restaurant chefs will be asked to pair menu items with local craft beverages. The state will also partner with the Culinary Institute of America and the NYS Wine & Culinary Center to put together pairing recipes for various New York craft beverage products. Participating restaurants, bars, and retail outlets will highlight unique NYS craft beverages they offer by bringing attention to these products in store and on menus.

Investing in the Upstate Revitalization Initiative and Regional Economic Development Councils
Since 2011, the state has awarded the Finger Lakes $1.3 billion through the URI and REDC initiatives in a competitive process to spur job creation and drive economic growth based on regional priorities. This includes $506 million in REDC awards and $500 million in URI funding which has created more than 22,700 jobs in the region since 2010. As a result, the unemployment rate is 4.7 percent down from 8.0 percent over the same period. The Executive Budget includes core capital and tax-credit funding that will be combined with a wide range of existing agency programs for a seventh round of REDC awards totaling $750 million.

Driving Economic Growth and Revitalizing New York’s Infrastructure
The FY 2018 Executive Budget continues Governor Cuomo’s focus on revitalizing New York’s economy, creating well-paying jobs and investing in key capital projects in the Finger Lakes. The Governor is also delivering on his historic commitment to revitalize New York State’s infrastructure, and in partnership with public authorities, and local and federal governments, the state is moving forward with $100 billion in transformative projects across New York.

When complete, the trail network will stretch through the Hudson Valley and Adirondacks from New York City to the Canadian border and along the Erie Canal from Albany to Buffalo. This investment will create the largest state multi-use trail in the nation, attracting new tourists to explore New York’s diverse landscapes and rich history.

In the Finger Lakes region, the Empire State Trail will bring visitors to a number of places, including:

Increasing Access to Higher Education
Governor Cuomo proposes making college tuition-free for New York’s middle-class families at all SUNY and CUNY two- and four-year colleges. New York’s tuition-free college degree program, the Excelsior Scholarship, is the first of its kind in the nation and will help alleviate the crushing burden of student debt while enabling thousands of students to realize their dream of higher education. Under the program, tuition-free college would begin immediately for students of families making up to $100,000 annually, and phase in over the next two years to those making $125,000 annually. Once fully phased in, the program is estimated to cost $163 million per year.

Enabling Access to Ridesharing Across New York State
The current limitations on the availability of ridesharing services has meant that millions of New Yorkers are not only missing out on an alternative form of transportation, but thousands more are being prevented from pursuing new flexible job opportunities as rideshare drivers.

The FY 2018 Executive Budget authorizes Transportation Network Companies, such as Uber and Lyft, to operate throughout the state and creates uniform licensing requirements.

Governor Cuomo has also made mandate relief a priority and has eliminated dozens of burdensome requirements for local municipalities. After decades of local government calls for change, the Governor implemented reforms to the binding arbitration process for police and fire unions which require these panels take into account a municipality's ability to pay certain local contracts. Additionally, the Governor’s reforms to the state’s pension system are saving the state, local governments, and school districts more than $80 billion over the next 30 years.

Implementing Buy American Act
Each year, New York State spends billions of dollars on the procurement of goods and services. However, existing regulations place little emphasis on ensuring this spending power is leveraged to support all American manufacturing, many which are right here in New York State.

Under the Governor’s “Buy American” plan, all state entities will be required to give preference to American-made goods and products in any new procurements more than $100,000. This measure would implement the nation’s strongest mandate for the purchase of American-made products by state entities.

Combating the Heroin Epidemic
In 2016, the Governor signed into law a comprehensive plan to end the heroin and opioid epidemic in New York State. The FY 2018 Budget builds on this progress by investing $200 million to support prevention, treatment and recovery programs targeted toward chemical dependency, residential service opportunities, and public awareness and education activities.

To ensure that current and future New Yorkers have access to clean water, the Budget initiates the $2 billion Clean Water Infrastructure Act. Funded at $400 million per year over five years, this historic investment will support critical drinking water, wastewater, and source water protection initiatives. This builds on the $38.5 million the state has already provided for water infrastructure in the Finger Lakes since 2015.

Continuing the Trend of Fiscal Responsibility
Under Governor Cuomo, New York’s finances have made a dramatic turnaround since the depths of the recession and the preceding high-spending eras. Before Governor Cuomo took office, the annual State Budget grew faster than income 60 percent of the time (or three out of every five budgets), and spending over the entire period grew at an average rate of approximately 7.0 percent, compared to income growth of 6.2 percent. With the adoption of the two percent spending benchmark, the unsustainable trend has been reversed. The FY 2018 Executive Budget continues this trend of fiscal responsibility and builds on the Governor’s commitment to expand opportunity and grow New York’s economy.