Governor Andrew M. Cuomo today announced the Finger Lakes Region highlights of the 2018 State Budget, which builds on the state’s fiscal discipline over the last six years while strengthening the middle class, reducing taxes, and making smart investments in New York's future. For the seventh consecutive year, the budget is balanced and holds spending growth below 2 percent. A video showcasing the Finger Lakes budget highlights is available here.

Highlights of the Middle Class Recovery Act in the Finger Lakes Region include:

Highlights of strategic investments benefitting the Finger Lakes Region include:

Other significant initiatives and investments included in the FY 2018 State Budget that will benefit the Finger Lakes Region include:

The Budget enacts the Governor’s landmark Excelsior Scholarship program to make college affordable for working- and middle-class families making up to $125,000 per year at SUNY and CUNY two- and four-year colleges. 55,747 Finger Lakes families are eligible for the program. In addition, the Finger Lakes will receive $16.7 million in capital funding to maintain and upgrade its SUNY Higher Educational facilities.

The FY 2018 Budget continues the progress made to strengthen educational outcomes and increase access to high-quality learning across New York State. The FY 2018 Budget increases Education Aid by $1.1 billion, including a $700 million increase in Foundation Aid, bringing the new Education Aid total to $25.8 billion or an increase of 4.4 percent. Under Governor Cuomo, School Aid has increased $6.2 billion or 32 percent over six years. The FY 2018 Budget increases School Aid in the Finger Lakes by $60.2 million, including a $41.0 million increase in Foundation Aid.

"Upstate matters. The Upstate economy matters, and having Uber come to Upstate New York was essential - and that is going to be a reality in 90 days."

The FY 2018 State Budget begins middle class tax cuts for New Yorkers. In the first four years, Finger Lakes Region taxpayers will save $333 million – an average tax cut of $1,345. When fully phased-in, the cuts will provide an average single-year benefit of $664 to more than 321,000 taxpayers in the region.

The FY 2018 State Budget enacts an enhanced middle class child care tax credit that will help more than 200,000 middle-class families make their child care more affordable. The new tax credit would supplement the current New York State Child and Dependent Care Tax Credit and more than double the benefit for families earning between $60,000 and $150,000, bringing the total credit from $169 to $376 per household on average.

The enhancement of the child and dependent care credit will provide 9,100 income tax filers in the Finger Lakes Region with an average additional benefit of $193, totaling approximately $1.8 million in tax cuts for the region.

The FY 2018 Budget continues the Governor's efforts to relieve the property tax burden and builds on the success of the 2 percent property tax cap. The typical New York homeowner pays 2.5 times more in local property taxes than in state income taxes. This Budget will empower citizens to control the cost of local government by requiring counties to assemble local governments to find efficiencies for real, recurring taxpayer savings. The shared services plans will be required to go through hearings and a public comment period.

The FY 2018 State Budget maintains $103 million in Aid and Incentives for Municipalities in the Finger Lakes, including $99.8 million in aid and incentives and $3.2 million in Video Lottery Terminal Impact Aid.

Given the looming threats from Washington, the FY 2018 Budget provides flexibility for the state to adjust spending during the fiscal year to account for a significant loss of federal aid. If either federal Medicaid or non-Medicaid federal support is reduced by $850 million or more, the Director of the Budget will develop a plan to make uniform spending reductions. This plan would take effect automatically unless the legislature passes their own plan within 90 days. 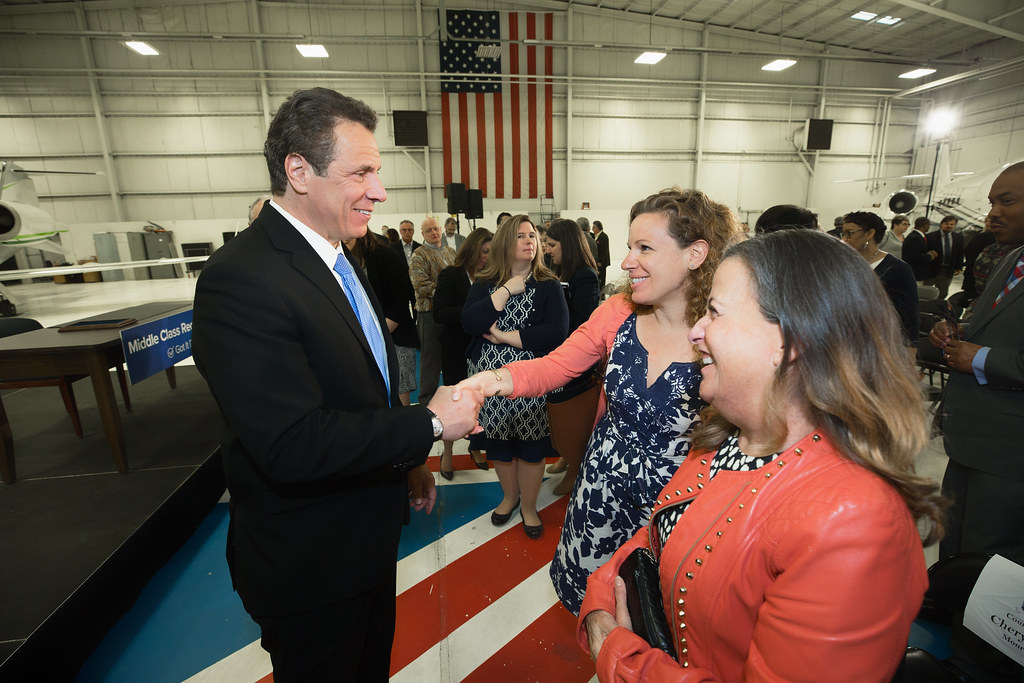 The FY 2018 State Budget includes $39.8 million in funding for the Greater Rochester International Airport to activate a $53.7 million project to transform the outdated hub into a state-of-the-art transportation center. The project will include a wide-scale redesign of the terminal building to incorporate sustainable elements such as solar panels and rainwater collection, new signage, enhanced security measures, new technology to improve accessibility, and premier shopping and dining options to improve the overall traveler experience. Governor Cuomo unveiled new renderings of the airport which are available here.

Under the leadership of Governor Cuomo, New York State is executing the largest infrastructure and development plan in the nation. The State’s $100 billion plan is reimagining our airports, increasing the capacity of our transit hubs, modernizing our subway, bus and commuter rail networks, and rebuilding roads and bridges across the state. The FY 2018 State Budget supports the following investments in Finger Lakes Region transportation infrastructure:

$10 Million to Launch the Photonics Venture Challenge in Rochester

The FY 2018 State Budget invests $10 million to establish a multi-year Photonics Venture Challenge in Rochester – the first of its kind in the world. The business competition will aim to support start-up companies that commercialize developing technologies through a business accelerator program, which is modeled on the internationally recognized 43North initiative in Buffalo.

$20 Million for the New REMADE Institute at RIT

The FY 2018 State Budget invests $20 million to support the creation of the Reducing Embodied-Energy and Decreasing Emissions Institute, to develop clean energy technology that supports recycling and waste reduction. RIT was chosen to lead the U.S. Department of Energy’s effort, as part of the agency’s Manufacturing USA initiative.

The FY 2018 State Budget includes $2.1 million to support the expansion of Datto, Inc. in the Metropolitan Building in downtown Rochester. This expansion will create up to 200 new high-tech jobs, bringing the company’s total employment to approximately 350. Datto was founded in 2007 by Rochester Institute of Technology graduate Austin McChord and has developed into a world leading company for backup and disaster recovery services. Datto’s expansion is being supported through Governor Cuomo’s Upstate Revitalization Initiative.

$5 Million to Establish the Finger Lakes Welcome Center in Geneva

The FY 2018 State Budget invests $5 million to establish a new Finger Lakes Tourism Center in Geneva. The Finger Lakes Welcome Center will become a vital component of New York's tourism industry which has an economic impact of more than $100 billion and supports more than 900,000 jobs. The tourism upgrades at the Geneva Visitors Center will serve as an anchor for showcasing information on world-class destinations and historic sites in the Finger Lakes and continue to drive economic development in the region.

$1.22 Million to Support Wine and Craft Beverage Research and Development

The FY 2018 State Budget includes support for state-of-the-art research and development to give New York State a strategic advantage in the wine and craft beverage industry. Funding is allocated by the following:

$1,020,000 for the Wine and Grape Foundation, located in Canandaigua, to support research and promotion for this key Finger Lakes industry.

$200,000 for testing and evaluating New York State hop and barley varieties in the Evaluation and Testing Program at the NYS Experiment Station in Geneva. This will increase availability of locally grown hops and barley to be used by craft beverage producers.

$100 Million for Round II of the Downtown Revitalization Initiative, Including $10 Million for One Finger Lakes Community

The FY 2018 State Budget includes $100 million for Round II of the successful Downtown Revitalization Initiative. The Initiative was created last year to support transformative housing, economic development, transportation, and community projects to attract and retain residents, visitors, and businesses to downtowns. The first round awarded $100 million last year to ten communities that are currently experiencing population loss or economic decline to develop revitalization plans for their downtown area, developed in collaboration with policy and planning experts.

Protecting the Environment for Future Generations

The FY 2018 State Budget invests $200 million to complete the Hudson River Valley Greenway and Erie Canalway trails and create the Empire State Trail, the largest state multi-use trail in the nation. The 750-mile trail will provide new opportunities for hiking and biking along scenic vistas and through charming, historic communities, driving tourism and economic activity across New York. The Empire State Trail will span the state, from the New York Harbor up through the Adirondack Mountains to the Canadian border – and from the shores of Lake Erie along the historic Erie Canal to the heart of the Capital Region.

The FY 2018 State Budget includes $3.4 million to upgrade infrastructure at Hamlin Beach State Park. The park, which is located on Lake Ontario, will construct a new sewage treatment system to address critical health and environmental issues.

The FY 2018 State Budget includes $1.2 million for Sampson State Park on Seneca Lake, which feature’s one of the park system’s largest campgrounds. Funding will help renovate deteriorated restroom and shower buildings that serve visitors to park’s more than 300 campsites.

The FY 2018 State Budget continues to support the Environmental Protection Fund at $300 million – the highest level of funding in the program's history. The statewide investment includes $41 million for solid waste programs, $86 million for parks and recreation, $154 million for open space programs and $19 million for the climate change mitigation and adaptation program. Investments in the Finger Lakes Region include:


Investing in Healthcare and Wellness

$20 Million to Create Supportive Housing in the City of Rochester

The FY 2018 State Budget agreement includes $20 million for the creation of supportive housing units for the City of Rochester. These supportive housing projects will help combat homelessness by providing an array of services for vulnerable individuals, including employment training, counseling, and assistance in obtaining and maintaining primary and mental healthcare.

The FY 2018 State Budget includes re-appropriations of $95.8 million to dramatically transform and enhance the delivery of health care in the Finger Lakes Region, in addition to the FY 2018 State Budget’s new $500 million statewide capital program under which regional awards will be made later this year. The $95.8 million investments supported by re-appropriations in the FY 2018 State Budget fund essential projects will improve patient care and make facilities more viable in the long term. This funding is a portion of a $3.3 billion commitment made by New York State over four years to help health care providers statewide fund critical capital and infrastructure improvements, as well as integrate and further develop health systems.

Direct Support to Leverage $18 Million for Salary Increases for 8,000 Direct Care Workers in the Finger Lakes

The FY 2018 State Budget adds new State funding that will leverage $18 million for annual funding for salary increases for direct care staff and direct support professionals in the Finger Lakes. The funding increase will support 8,000 employees working in the nonprofit sector that provide services on behalf of the Office for People with Developmental Disabilities, the Office of Mental Health and the Office for Alcoholism and Substance Abuse Services. These providers will also receive funding to support a 6.5 percent salary increase, which will be phased-in over a two-year period. The funding will also help non-profits mitigate recruitment and retention challenges and promote further professionalism in the industry.