Governor Andrew M. Cuomo today announced the expansions of two industry-leading companies in Syracuse located in the Central New York Region that will grow the region's economy. Bankers Health Group, LLC will relocate and consolidate several of their Central New York operations in Syracuse to a newly constructed facility located at 300-324 Spencer Street. JMA Wireless committed to move the manufacturing of 5G equipment from Texas to the historic Coyne Building in the southeast gateway to downtown Syracuse. These two companies will create more than 400 jobs altogether.

"Syracuse is continuing to grow with new businesses and serve as a hub for innovation," said Lieutenant Governor Kathy Hochul. "The expansion of Bankers Healthcare Group and JMA Wireless will add hundreds of jobs in the area and further advance the high-tech industry in Central New York. These investments will strengthen the region's economy, further revitalize the area, and create new opportunities for New Yorkers."

Albert Crawford, Founder, Chairman and CEO of Bankers Healthcare Group said, "By partnering with the state, we not only have the ability to expand our company footprint but create more than 300 new jobs in Central New York. Our company headquarters have been in downtown Syracuse for nearly two decades, and it's an honor to play a key role in attracting top talent, contributing to the local economy, and supporting the redevelopment of the Inner Harbor."

Spencer Street LLC will construct and furnish a 100,000 square-foot facility at 300-324 Spencer Street in Syracuse to house Bankers Healthcare Group and Capital Collection Management. The $35 million project will include the demolition and remediation of the existing property, and the construction and full equipping and furnishing of the new facility. The combined initiative will result in the creation of 330 new jobs. Bankers Health Group employees will remain at their current office locations in Franklin Square and Armory Square; Capital Collection Management employees will continue working from the company's Armory Square location. Bankers Healthcare Group expects that the project will be completed by the end of 2023.

New York State is assisting the project with a total investment of $11 million, which includes a $4 million capital grant and $7 million in Excelsior Jobs Tax Credits. Founded in 2001, Bankers Healthcare Group provides innovative, hassle-free financial solutions to healthcare practitioners and other licensed professionals. BHG has three office locations: corporate headquarters in Davie, Florida; research and development in New York City; and financial headquarters in Syracuse, New York. BHG is a 13-time honoree on the Inc. 500/5000 and was recently named the second-best workplace in New York State by FORTUNE magazine and Great Place to Work. For more Information about Bankers Healthcare Group, click here.

JMA, a global innovator of 4G and 5G software-based technology, will invest $25 million to create a 5G high tech manufacturing center in downtown Syracuse. JMA will renovate the former Coyne Building and others located at Cortland Ave on the south end of Syracuse's downtown. The 5G campus, spanning a city block, will manufacture the world's first indoor 5G millimeter wave radio system and act as a showcase for 5G driven experiences.

This project complements efforts by the City and County to develop a strong tech corridor from downtown into the South Side, making Central New York a center for 5G and smart city development.  The project will create 100 jobs in a distressed neighborhood adjacent to downtown, these jobs will range from entry level to advanced engineering. New York State is providing a $5 million Upstate Revitalization Initiative grant to assist with this project.

In 2017, Governor Cuomo announced that JMA would invest $34M to expand operations in Onondaga County and relocate out-of-state operations to Liverpool. JMA has exceeded their hiring commitment of 145 jobs, creating more than 200 new jobs at their Liverpool location as well as meeting the investment commitment in half the expected time. Over the last six years, JMA has invested more than $100M in the Syracuse area and employs over 500 locally.

Empire State Development Acting Commissioner and President and CEO-designate Eric J. Gertler said, "Under Governor Cuomo's leadership, an increasing number of high-caliber, quality companies are showing greater interest in every region of the state, bringing jobs and opportunity that have reversed years of economic decline. The decision by JMA Wireless and Bankers Healthcare Group to expand operations in Central New York demonstrates that New York State is open for business - not just for the marketplace of today, but for tomorrow's economy as well."

Central New York Regional Economic Development Council Co-Chairs Randy Wolken, President & CEO of the Manufacturers Association of Central New York (MACNY) and Deborah Stanley, President of the State University of New York at Oswego said, "The regional council is fully committed to the future of Downtown Syracuse. By supporting these transformative projects we are furthering our efforts to reinvigorate the area, creating a welcoming place for millennials, families and others looking to experience all that the area has to offer."

Senator Rachel May said, "We are very excited to welcome JMA Wireless to the 53rd Senate District. Syracuse is a wonderful place to live, play, and raise a family, and I am so thrilled that companies are seeing this. JMA, with roots in Central New York, will be a great addition, bringing quality jobs to Syracuse's Southside and restoring a former hub of activity to productive use. I look forward to seeing them grow over many years. Thank you as well to Bankers Health for again investing in the City of Syracuse." 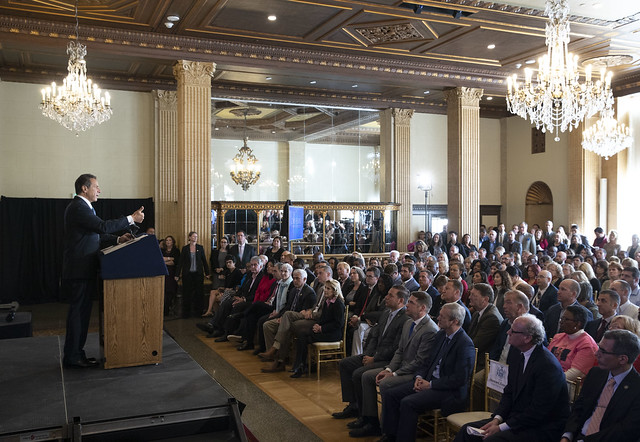 Assemblymember William B. Magnarelli said, "The expansion of these industries in Onondaga County is a wonderful progressive step towards building a technologically friendly jobs environment locally. The local economy will benefit by the additional jobs and opportunities the companies will bring."

Assemblymember Pamela J. Hunter said, "The expansion of these two businesses in Central New York confirms that our revitalization efforts are paying off. Not only will these businesses create hundreds of jobs, but as industry leaders in their respective fields they will surely engage with many outside suppliers, which will further stimulate our regional economy and encourage additional job growth."

Assemblymember Albert A. Stirpe said, "This is a great day for the city of Syracuse and for our regional economy. I've worked with JMA Wireless for a number of years and have seen the great things this technology leader has achieved in Clay, creating jobs and being a good corporate citizen. Their commitment to investing and growing in the city will bring good-paying jobs to the very location where potential workers live. That is an example of what we need to do to break the cycle of poverty in our community and lift the entire region."

Onondaga County Executive J. Ryan McMahon II said, "The momentum in our local economy is undeniable. The hundreds of news jobs being created by Bankers Health and JMA is exciting news for our community. Thank you to all of partners who helped make this a success"

Syracuse Mayor Ben Walsh said, "The Governor and his team were early supporters of the Syracuse Surge, our strategy for inclusive growth in the New Economy. When I went to the Governor with the concept, he listened. The investments in Syracuse by JMA and BHG wouldn't be possible without the Governor's commitment. These projects are evidence the Surge strategy is working: of the benefits of acquiring our street light network and using it to become New York's Flagship Smart City; the power of making Syracuse one of the first cities in the nation for a buildout of ultra-high speed wireless technology; and the potential of creating a Countywide STEAM School at the old Central Tech in downtown Syracuse."

Today's announcement complements "Central NY Rising," the region's comprehensive blueprint to generate robust economic growth and community development. The State has already invested more than $5.6 billion in the region since 2012 to lay the groundwork for the plan - capitalizing on global market opportunities, strengthening entrepreneurship and creating an inclusive economy. Today, unemployment is down to the lowest levels since before the Great Recession; personal and corporate income taxes are down; and businesses are choosing places like Syracuse, Oswego and Auburn as a destination to grow and invest in.

Now, the region is accelerating Central NY Rising with a $500 million State investment through the Upstate Revitalization Initiative, announced by Governor Cuomo in December 2015. The State's $500 million investment will incentivize private business to invest well over $2.5 billion - and the region's plan, as submitted, projects up to 5,900 new jobs. More information is available here.