Agreement Will Prevent Imminent Closure of the FitzPatrick Plant, Plant’s Continued Operation Will Save Approximately 600 Jobs and Maintain $500 Million in Annual Economic Activity Also Prevents 3 Million Tons of Greenhouse Gas Emissions Annually – the Equivalent to Keeping Over 600,000 Cars off the Road

Governor Andrew M. Cuomo today announced that Exelon Generation has agreed to assume ownership and management of the James A. FitzPatrick nuclear power plant in Scriba. The agreement to continue operation of the plant will save approximately 600 high-skilled, well-paying jobs, further the plant's contribution of $500 million per year in regional economic activity, and avoid three million tons of carbon emissions annually – representing about 10 percent of the state's carbon savings. The facility, currently owned by Entergy, provides enough carbon-free electricity to power more than 800,000 average-sized homes. The Governor made the announcement at a rally in support of the FitzPatrick Plant in Oswego County.

“Saving FitzPatrick is an enormous win for Central New York and the entire state, preserving hundreds of jobs and maintaining a reliable, carbon-free power source for New Yorkers,” Governor Cuomo said. “FitzPatrick’s continued operation is essential both to the regional economy and our nation-leading efforts to power the state with 50 percent renewable energy by 2030. I appreciate the efforts of Entergy and Exelon, and the hard work of our team from the state, including the Public Service Commission, the New York Power Authority and NYSERDA to save Fitzpatrick’s jobs, significantly reduce greenhouse emissions, and help build a sustainable future for our children and grandchildren.”

This landmark agreement between Exelon and Entergy was made possible by Governor Cuomo who facilitated the transaction between the two companies over the past several months, as well as his visionary Clean Energy Standard – the most comprehensive and ambitious mandate in the state’s history to fight climate change, reduce harmful air pollution, and ensure a diverse and reliable energy supply at affordable prices. The Clean Energy Standard provides bridge support to upstate nuclear power plants to ensure that critical progress on greenhouse gas emissions reductions is sustained as the state works toward achieving its goal to generate 50 percent of New York’s electricity from renewable energy sources like wind and solar by 2030.

"Under Governor Cuomo's leadership, New York continues to be a model for other states in combating climate change,” said Richard Kauffman, Chairman of Energy and Finance for New York. "Keeping this clean energy resource running means New York will not lose the progress we've already made in reducing harmful carbon emissions while we ramp up renewables to meet the Governor's mandate for 50 percent renewables by 2030. The steps we've taken today are welcome news for the Oswego community, and for all New Yorkers."

“I applaud Governor Cuomo for providing the leadership in creating the Clean Energy Standard,” said Public Service Commission Chair Audrey Zibelman. “As a result of his groundbreaking initiative, we will attain our goal of generating half of our electricity from renewable resources by 2030 while slashing carbon emissions, and help save future generations from the worsening impact of climate change.”

Ensuring the continued operation of the upstate nuclear power plants is critical to meeting the state's Clean Energy Standard, the economy and environment. According to a Brattle Group analysis, the Upstate plants account for about 24,800 in-state full time, direct and indirect jobs, $144 million in net state tax revenues annually, including more than $60 million in annual state and local property taxes, and avoid almost 16 million tons of carbon dioxide emissions annually, which equates to a societal value of almost $700 million annually based on federal estimates. FitzPatrick alone accounts for $17.3 million in local property taxes supporting critical services to local governments and schools.

Under the agreement, Entergy will transfer Fitzpatrick's operating license to Exelon for $110 million. The New York Power Authority has agreed to transfer the decommissioning trust fund and liability for FitzPatrick to Entergy, and if regulatory approvals are obtained and the transaction closes, Entergy would then transfer the fund and associated liability to Exelon. Transaction closure is dependent upon regulatory review and approval by state and federal agencies, including the US Department of Justice, the Nuclear Regulatory Commission, the Federal Energy Regulatory Commission and the New York State Public Service Commission. The transaction is expected to close in the second quarter of 2017.

FitzPatrick’s continued operation is essential both to the regional economy and our nation-leading efforts to power the state with 50 percent renewable energy by 2030.

Approval of the CES means Exelon will reinvest millions back into the nuclear units, including approximately $400-500 million in operations, integration and refueling expenditures for the upstate plants in spring of 2017, all of which will have a positive impact across the state. Exelon has committed to refueling FitzPatrick in January 2017 and does not anticipate changes to staffing levels at the plant, which normally employs about 600 people.

Exelon operates two other nuclear energy facilities in upstate New York: R.E. Ginna and Nine Mile Point, the latter of which is adjacent to FitzPatrick. Together, Exelon’s two upstate plants provide carbon-free electricity to more than 2.5 million homes and businesses while employing more than 1,500 full-time staff.

Exelon President and Chief Executive Officer Chris Crane said, "We thank Governor Cuomo and his administration for their part in facilitating an agreement to save FitzPatrick. His leadership on the CES and preserving zero-emissions assets has truly positioned New York as the nation's leader in clean energy."

Entergy Chairman and Chief Executive Officer Leo Denault said, "We would like to thank New York Governor Andrew Cuomo and his administration for being progressive in placing a value on the carbon-free attribute that nuclear power plants provide."

​Senator Patty Ritchie said, “The FitzPatrick Nuclear Plant is integral to our economy and to our environment, with many of our residents and neighbors depending on the facility for employment and a reliable source of power. I am thrilled that Governor Cuomo and the Exelon team have come to an agreement that will allow this region to maintain 600 good paying jobs that support our community. This agreement is a testament to the Governor’s support of maintaining a thriving economy and a healthier climate right here in Central New York.”

Assemblyman William Barclay said, “This agreement is a pivotal move in securing a major employer and economic driver for Central New York. Not only will it save hundreds of jobs, but will also position our community as a competitive player in the clean energy industry. I thank Governor Cuomo and the stakeholders for brokering this agreement – together we are taking an important step toward meeting our sustainable energy goals while preserving the jobs of tomorrow.”

IBEW Local 97 President & Chair of the Utility Labor Council Ted Skerpon said, “This plant has helped shape Oswego’s middle class by offering well-paying, high-skilled jobs and providing a ladder of opportunity for all New Yorkers. Today’s agreement will build on this state’s commitment to the working men and women of Oswego County and help ensure this region’s future growth and prosperity. I thank Governor Cuomo for his commitment to ensuring this plant remains open and I look forward to our work together as we continue to make Oswego a valued place to live and work.”

The CES builds on the progress made under New York’s Renewable Portfolio Standard and is a central component of Reforming the Energy Vision, Governor Cuomo’s strategy to fight climate change and grow New York’s economy by building a cleaner, more resilient and affordable energy system for all New Yorkers. Under the RPS, 65 large-scale renewable energy projects have been developed around the state, adding approximately 2,000 megawatts of renewable capacity to the New York energy market, with additional projects expected soon under the final phase of the RPS program. 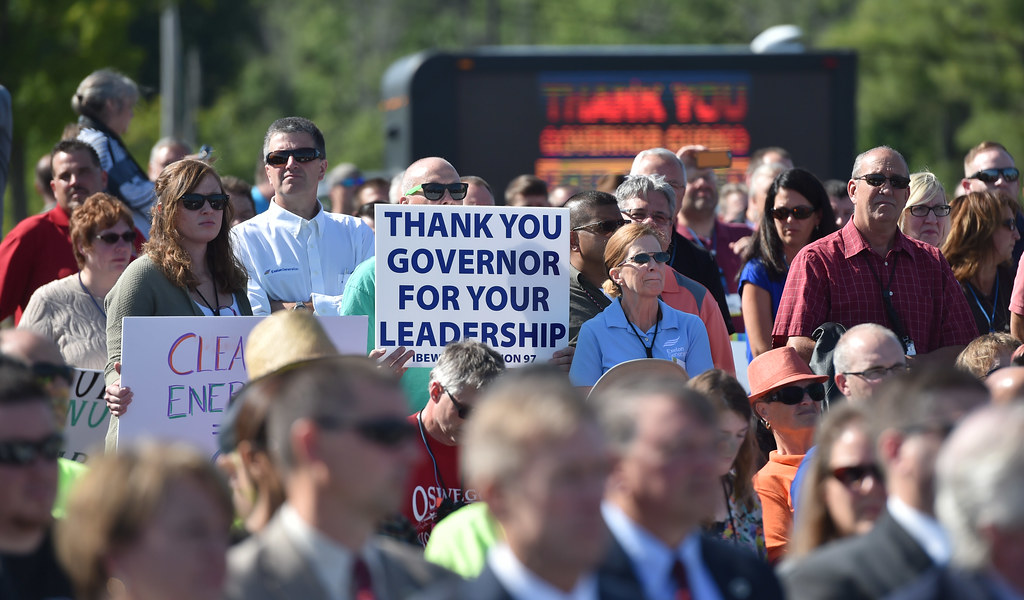