This initial deployment of volunteers will embed with the non-profit rebuilding organizations All Hands and Hearts, Heart 9/11, and NECHAMA, cleaning, restoring, and rebuilding homes. Students will deploy to 2-weeks and earn college credits. UNICEF USA has committed $500,000 to support this effort.

"The federal response—or lack thereof—in Puerto Rico following Hurricane Maria left millions of American citizens in the dark, without access to basic necessities, and put countless lives in danger," Governor Cuomo said. "As we have recently learned, the death toll attributable to Hurricane Maria is as high as 70 times more than the federal estimate, irrefutably proving that the federal government prioritizes the lives of certain Americans over others. In the face of this federal inaction, New York is proud to work with non-profits filling the void in Puerto Rico to rebuild the homes and lives of our brothers and sisters on the island."

This deployment follows the first phase of the NY Stands with Puerto Rico Recovery and Rebuilding Initiative launched on April 29. During the first phase, the Governor deployed a Tactical Assessment Team of state experts and labor, non-profit, philanthropic, and academic partners to evaluate reconstruction needs and to develop a comprehensive rebuilding roadmap for communities in need. The Assessment Team's findings are guiding the strategic deployment of approximately 500 SUNY and CUNY students, as well as skilled workers from the building and construction trades, throughout the summer.

This month, Governor Cuomo called for the establishment of an independent federal commission to investigate the federal response to 2017 natural disasters in Puerto Rico. After the release of the Harvard School of Public Health's analysis estimating that the death toll of Hurricane Maria could be 70 times higher than the current official estimate, Governor Cuomo joined Congresswoman Nydia Velázquez's demand for a commission to immediately investigate the federal response, death toll and any negligence or failure to appropriately respond, as well as disaster preparedness, response and recovery. Congresswoman Velázquez is preparing legislation to establish the Commission. 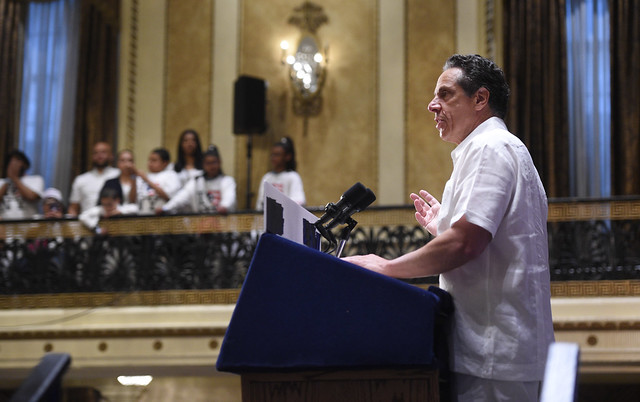 Since Hurricane Maria's landfall in September 2017, Governor Cuomo has traveled to Puerto Rico four times and has continuously directed critical resources to communities in need. In the immediate aftermath, New York established the Empire State Relief and Recovery Effort, ultimately distributing at least 4,400 pallets of supplies collected from 13 donations sites across the state. New York State also deployed more than 1,000 personnel, including hundreds of utility workers and power experts to help with power restoration and grid stabilization.

Governor Cuomo and the New York Congressional Delegation continue to advocate for Puerto Rico to get the federal aid they need and deserve. In December, Governors Cuomo and Rosselló, and members of the New York Congressional Delegation released a Build Back Better Assessment Report that called for a $94.4 billion federal aid package to help Puerto Rico build back stronger. The plan identified specific sectors needing investments, including housing, power grid and resiliency, agriculture and others. Together with $487 million for public safety and first response and $9 billion for long-term recovery management, the total funding need is $94.4 billion.

In addition, in an effort led by SUNY Maritime in late May, more than 500 SUNY Maritime College cadets and approximately 50 students from University at Albany and SUNY College of Environmental Science and Forestry volunteered with local non-profit rebuilding organizations, removing debris and preparing roofs for construction in the greater San Juan area.