State Will Have Deployed Nearly 750,000 Empty Sandbags, Nearly 47,000 Filled Sandbags, 14 Sandbaggers, Hundreds of Pumps and 670 Feet of Aquadam in the Eight Impacted Counties By Saturday Afternoon

Governor Andrew M. Cuomo today announced that he has deployed additional state resources to the communities that border Lake Ontario to help protect them from flooding. The Division of Homeland Security and Emergency Services has deployed 70,000 sandbags and two six-inch pumps directly to Monroe County. By the end of Saturday, the State will have deployed nearly 750,000 empty sandbags, nearly 47,000 filled sandbags, 14 sandbaggers, hundreds of pumps and 670 feet of aquadam throughout the eight counties lining the shores of the lake. The Division of Homeland Security and Emergency Services remains in constant communication with local partners and additional sandbags and sandbaggers, and stands ready to provide additional assistance as needed. The New York National Guard will also have 100 members activated by Sunday to support preparedness operations.

"Our immediate concern is the emergency preparation in case of flooding, which has the potential to impact the entire northern coast of the state," Governor Cuomo said. "We are working with local communities to protect the shoreline including fortifying it with sand bags and an emergency aquadam, and we are deploying 100 members of the National Guard. I'm told five times a year that this is a one in one hundred year flood, but I believe these record levels are going to be recurring and we need to think about building back better with higher and more resilient shorelines. If the federal government passes its $2 trillion infrastructure program, part of that money should be used to rebuild our shorelines to make sure we are prepared for these new weather realities. And the IJC needs to do its part by better managing the water levels so they don't let it get to this point."

Following a meeting with State officials earlier this week the International Joint Commission increased outflows of water from the Robert Moses-Robert H. Saunders Power Dam on the St. Lawrence River in order to minimize impacts, however the lake's water level remains more than one foot above average and could continue to rise.

Stabilization of existing, functional storm-damaged dwellings, decks, and walkways with temporary bracing and piling; and

Removal of channel blockages in tributaries to Lake Ontario blocked by shoreline sediment.

I'm told five times a year that this is a one in one hundred year flood, but I believe these record levels are going to be recurring and we need to think about building back better with higher and more resilient shorelines.

Additionally, the State Department of Transportation (DOT) is overseeing sandbag filling operations in the eight counties bordering Lake Ontario, in cooperation with the Department of Corrections and Community Supervision which has provided work crews made up of between 5-12 eligible incarcerated individuals, who have filled almost 113,000 sand bags and worked on an aquadam deployments. DOCCS will continue to make additional crews available as the situation evolves.

DOT's incident command system has been activated for this weather event and maintenance staff are deploying DHSES equipment such as water pumps and aqua dams to strategic locations bordering the Lake in anticipation of flooding.  Crews are also readying response equipment, inspecting drainage structures in low lying areas, and inspecting culverts for debris. The New York State Power Authority and Canal Corporation have also provided assistance in transporting resources to affected communities. 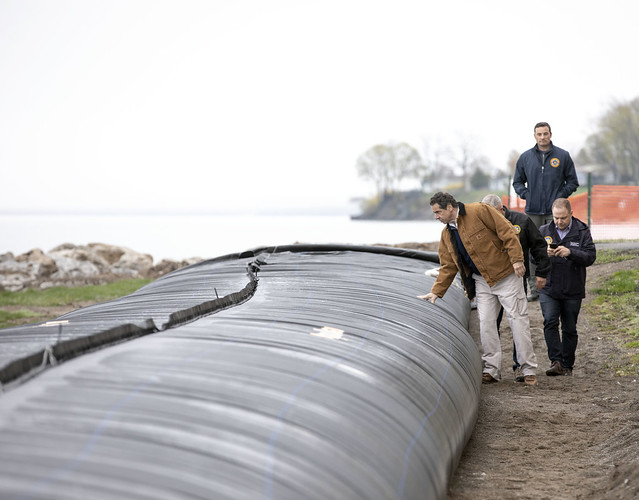