Governor Andrew M. Cuomo today announced Corning Incorporated has chosen to manufacture its new pharmaceutical packaging line, Corning Valor Glass, in the Southern Tier. The $95.5 million project will create 185 jobs in the region by 2020. The new jobs will be located at the Corning Innovation Support Center in Big Flats and at Corning's Research and Development Facility at Sullivan Park in Erwin. Valor Glass is a revolutionary pharmaceutical glass packaging solution that enhances the storage and delivery of today's drug formulations and will provide more reliable access to medicines essential to public health.

"Corning has been a beacon of enterprise and innovation for decades, and this new expansion builds on our efforts to spur development and job growth for the Southern Tier," Governor Cuomo said. "By working with local leaders and the Regional Economic Development Council, our strategic Southern Tier Soaring plan is putting the region on the right track and giving Corning the tools and confidence to grow and expand their world-class products in the region."

Valor Glass is designed to address a number of problems in the glass injectable pharmaceutical market, including: damage, breakage, and particulate generation on high-speed pharmaceutical filling lines and in the supply chain, and incompatibility of drugs with borosilicate glass containers which can lead to glass delamination.

Corning CEO Wendell Weeks said, "Valor Glass was invented right here in the Southern Tier so it is only fitting our first significant manufacturing operation be located here. Thanks to the Southern Tier strategic plan and Governor Cuomo's ongoing investment in this region through initiatives like the Upstate Revitalization Funding program, I believe the future of our community is brighter than ever."

To encourage Corning to grow its' pharmaceutical operations in the region,  Empire State Development has offered up to $6 million through the Southern Tier Soaring Upstate Revitalization Initiative. The company will use the grant to purchase manufacturing equipment and to make infrastructure improvements. Corning will also receive up to $1.75 million through the Excelsior Tax Credit Program in exchange for job creation commitments. The total project cost is $95.5 million.

Developing and manufacturing Valor Glass in the Chemung Valley is part of Corning's plan announced in July to invest $500 million and create 1,000 new jobs in the United States. To further support the production and delivery of Valor Glass, Corning will also add jobs in the future at an existing facility in Vineland, N.J. and at a location in the Southeast portion of the country. Over time, Corning plans to invest $4 billion and create 4,000 new high-tech jobs.

"Corning has been a beacon of enterprise and innovation for decades, and this new expansion builds on our efforts to spur development and job growth for the Southern Tier."

Empire State Development President, CEO & Commissioner Howard Zemsky said, "Corning's $95.5 million investment in its pharmaceuticals division will create high-quality jobs for the Southern Tier and is further proof that the region is soaring."

Senator Tom O'Mara said, "With the opening of Corning Incorporated's new Valor Glass line, the Southern Tier is cementing its place as a hub for innovation and advanced manufacturing. We are not only excited about the nearly 200 new jobs that will be brought to the region, we're also excited to be involved in the cutting edge technology that Corning Incorporated developed in making a healthier New York and beyond. Together with Governor Cuomo, we are strengthening the Southern Tier's economy more than ever before."

Assemblyman Phil Palmesano said, "Thank you to Corning Incorporated for its continued innovation and investment right here in the Southern Tier of New York State.  By creating and retaining hundreds of jobs, this announcement will help our local economy and improve the quality of life for families right here in our region.  We must continue to make it a priority to foster manufacturing and good-paying jobs for our residents.  I look forward to working with Governor Cuomo and my colleagues in the Legislature in working towards this goal and to establish the Southern Tier as a center of innovation."

Richard Negri, Mayor of the City of Corning, said, "This announcement is yet another success of  Governor Cuomo's strategic investments to attract and retain world-class businesses and support job creation and economic development in upstate New York. Together, we are positioning the Southern Tier at the forefront of innovative industries and paving the way for even more high-paying jobs and economic opportunities. I applaud Corning's decision to manufacture their state-of-the-art product line right here, and look forward to working with Governor Cuomo to continue to help the Southern Tier economy soar."

Big Flats Town Supervisor Ed Fairbrother said, "With the creation of 185 new jobs through this new development, Governor Cuomo's innovative investment strategies are working and putting the Southern Tier to work. These new job opportunities will continue to enrich the growing economy of the Southern Tier and the workers in Big Flats, and I applaud Corning's decision to expand right here."

Erwin Town Supervisor David B. Erwin said, "Governor Cuomo's Southern Tier Soaring plan is bringing new jobs, businesses, investments, and innovations to the area thus far, and this new development will enrich the thriving economy and community further. With new jobs and economic activity coming to the Southern Tier and continued commitment from the state, I look forward to working with Governor Cuomo to attract more businesses to take advantage of this skilled region."

Today's announcement complements "Southern Tier Soaring" the region's comprehensive blueprint to generate robust economic growth and community development. The State has already invested more than $4.6 billion in the region since 2012 to lay for groundwork for the plan - attracting a talented workforce, growing business and driving innovation. Today, unemployment is down to the lowest levels since before the Great Recession; personal and corporate income taxes are down; and businesses are choosing places like Binghamton, Johnson City and Corning as a destination in which to grow and invest. Now, the region is accelerating Southern Tier Soaring with a $500 million State investment through the Upstate Revitalization Initiative, announced by Governor Cuomo in December 2015. The State's $500 million investment will incentivize private business to invest well over $2.5 billion - and the region's plan, as submitted, projects up to 10,200 new jobs. More information is available here. 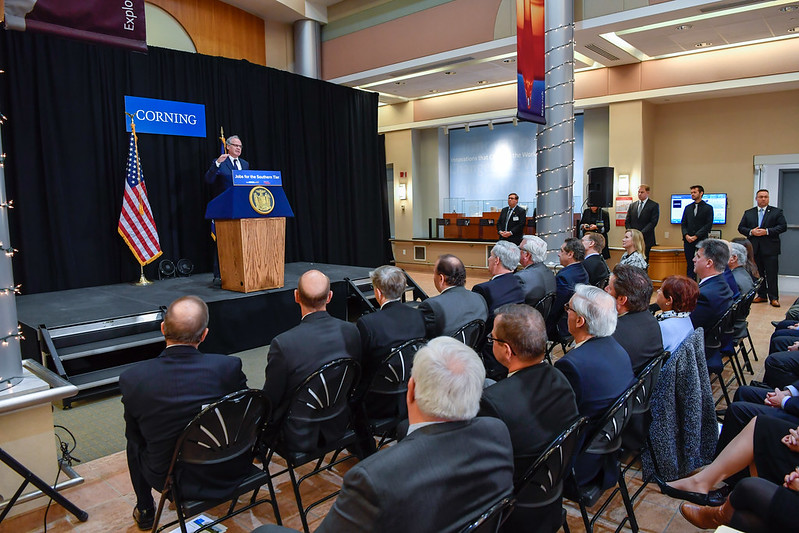