$75 Million Project is Part of Unprecedented $1.8 Billion State Investment in the South Bronx

Governor Andrew M. Cuomo today announced that the $75 million transformation of the Sheridan Expressway from an interstate highway to a pedestrian-friendly boulevard is now complete, giving South Bronx residents and visitors a direct connection to the Bronx River waterfront and Starlight Park. This transformational project is part of an unprecedented $1.8 billion state investment in the South Bronx. With the new and improved Sheridan project now complete, the Governor also announced that work is now underway on a $598 million design-build highway improvement in the South Bronx, the first phase of a massive, $1.7 billion project to transform the neighborhood by reconstructing the interchange of the Bruckner Expressway and new Sheridan Boulevard, and improving access to the Hunts Point Market.

"For far too long, South Bronx residents have contended with noise, traffic and physical barriers that have limited mobility and economic growth," Governor Cuomo said. "Even worse, generations of children had to contend with the pollution and asthma from truck traffic in the community. The new and improved Sheridan Boulevard corrects the planning mistakes of the past by protecting the health and safety of the South Bronx, by reconnecting local neighborhoods, and by improving access to the nearby Bronx River waterfront and parks. The new Hunts Point project will build upon that success, further connecting the neighborhood to parks and the waterfront while reducing traffic on local streets and making it easier than ever to access the Hunts Point Market and the significant commerce it generates in the borough and throughout the entire region."

The Hunts Point project, to be completed in three phases, will provide direct access to the Hunts Point Market from both the Bruckner Expressway and the new Sheridan Boulevard. The market is one of the largest wholesale food distribution centers in the world. More than 78,000 vehicles travel to the Hunts Point Peninsula daily -- including 13,000 trucks using local roads -- which has contributed to poor air quality in the community.

The highway redesign will take traffic off local roadways, significantly reducing both noise and air pollution in a borough with some of the highest asthma rates in the country. The transformational project is expected to create 22,000 new jobs.

Beginning this month, the first phase of the project will build three new ramps -- a two-way ramp from Edgewater Road to the Sheridan and a ramp from eastbound Bruckner Expressway to Edgewater Road. It will replace four bridges over Bronx River Avenue and Amtrak/CSX rail lines, as well as improve the intersection of Bruckner Boulevard and Hunts Point Avenue. The current overgrown Garrison Park will be transformed, giving residents access to the Bronx River. It also will construct a shared-use path between Concrete Plant Park and Garrison Park, enhancing safety for pedestrians and bicyclists.

The project will improve the Lafayette Avenue intersection and build two new shared use paths along Edgewater Road and Bruckner Boulevard westbound. Under the Bronx River Avenue viaduct, new open space along the Bronx River will be constructed for the community. The portion of the Bryant Avenue pedestrian bridge spanning over Amtrak/CSX will be replaced.

The project is being managed by the New York State Department of Transportation and is scheduled for completion in the fall of 2022.

The new and improved Sheridan Boulevard corrects the planning mistakes of the past by protecting the health and safety of the South Bronx, by reconnecting local neighborhoods, and by improving access to the nearby Bronx River waterfront and parks.

New York State Department of Transportation Commissioner Marie Therese Dominguez said, "Governor Cuomo is working to improve the quality of life for New Yorkers by literally connecting communities - making them more accessible to green space, livable and easier to navigate, all while promoting economic growth. This initiative will reduce congestion and enhance safety for pedestrians and cyclists in the South Bronx, improving access to the Hunts Point Market, drawing the community together and connecting it with the Bronx River and local parks."

Congressman José E. Serrano said, "Today's announcement is an important victory for the many community groups and leaders who have fought for equity, access, and public health in our community. The effort to transform the Sheridan Expressway began with our community leaders, with the assistance of a federal TIGER grant. The completion of this stage of that process will allow more Bronx residents to access Starlight Park and the Bronx River Greenway, as well as improve public safety and health. I thank Governor Cuomo for his leadership in completing this significant project and for his commitment to improving the Bronx."

Senator Luis Sepúlveda said, "As Bronxites, we're all sadly too familiar with the long-term, devastating effects from intense congestion and pollution on the health and well-being of our communities. It is long past time for failed urban planning from a previous era to be reformed, and we are grateful the day has come to finally transform the Sheridan Expressway, easing traffic and preserving access to the beloved Bronx River. I commend the community groups and leaders who have spearheaded the fight for environmental justice and community preservation, as well as Governor Cuomo for his leadership on this issue and listening to the concerns of our community. We hope the new Sheridan Blvd will become a positive force in the Central Bronx, opening more space for pedestrians, nature, and community-building."

Assembly Member Marcos Crespo said, "With a historic investment of 1.8 billion dollars to redesign the Bruckner and Sheridan Expressway, the State of NY addresses an injustice that for decades impacted the health and quality of life of generations of Bronx residents. Not only will residents have access to our restored waterfront, new and increased parkland, access to a complete Bronx River Greenway; the elimination of truck traffic and emissions in local streets, improved business access and job growth, a developed community marketplace in underutilized public space, but this project also ensures that future generations breath cleaner air, diminishing the prevail ace of asthma and other respiring ailments in our borough. This is truly the most impactful and transformational project we've seen in decades in The Bronx, and it has been possible because of the leadership and constant support of our Governor Andrew Cuomo. I look forward to the completion of this work and looking forward to fully enjoying the many benefits alongside all my Bronx neighbors."

Assembly Member Carmen Arroyo said, "This long awaited transformation of the South Bronx is crucial to the future of this community and the quality of life of its residents. I applaud Governor Cuomo for his vision on this project and the tenacity to see this through to the end. We are excited to see the growth the new Sheridan Boulevard brings to the region."

Bronx Borough President Ruben Diaz Jr., said, "Time and time again Governor Cuomo has proven his commitment to rebuilding and modernizing infrastructure in this state, and the new Sheridan Boulevard is just the latest example of his success. This project has transformed an outdated interstate highway into a boulevard giving residents and visitors a direct connection to the Bronx waterfront and parks. This project realizes a vision Bronx residents have dreamed of for decades, and truly could not have happened without the Governor's leadership, and I thank him for helping to ensure the Bronx continues to grow and thrive for generations to come."

Council Member Rafael Salamanca said, "Residents of the Bronx have been held back for far too long due to the mistakes of the past, but that changes today with the completion of the new Sheridan Boulevard. This new pedestrian-friendly boulevard will connect the Bronx to other neighborhoods, parks and commercial opportunities that will allow the entire community to flourish. I commend Governor Cuomo for his work on getting this project done and for making a real difference in the lives of Bronx residents." 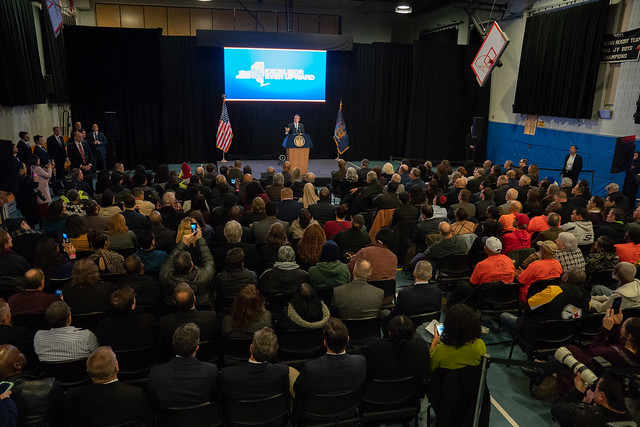 The Hunts Point Market is a vital economic engine for the Bronx, generating more than $2 billion in annual economic activity. It attracts tens of thousands of vehicles per day, which use local streets -- particularly Westchester Avenue and Bruckner Boulevard -- to go to and from the interstate highway network.

The overall reconstruction project will transform the local roadway system by creating a flyover ramp from the new Sheridan Boulevard and a new eastbound exit from the Bruckner Expressway to Edgewater Road, which feeds directly into the market. The Sheridan ramp will remove heavy traffic and idling trucks from local roads and is expected to reduce travel time by an average of 30 percent for each truck that now travels on local streets. For westbound traffic on the Bruckner, the second phase of the Hunts Point project will construct new entrance and exit ramps at Leggett Avenue for more direct access to the market.

The third phase of the project will eliminate the bottleneck at the Bruckner/Sheridan interchange by adding a third lane to the Bruckner in both directions. New signing and pavement markings will direct auto, truck and pedestrian traffic within the Hunts Point Peninsula.

This long-awaited project builds on the Bronx's transformational progress under Governor Cuomo's leadership. The Governor announced in 2017 that the state is investing $15 million in the construction of a new $20 million Greenmarket Regional Food Hub in the Bronx to increase New Yorkers' access to fresh, locally grown and produced food.

The Governor has also invested an additional $30 million in funding for the successful Urban Youth Jobs Program, an innovative tax credit program which connects minority and at-risk youth with employment opportunities in communities across the state. The state also awarded a $1.6 million performance-based grant to open Silvercup Studio North, a new film and production studio in the borough.

The Bronx will also see the construction of four new Metro-North stations at Hunts Point, Parkchester, Morris Park and Co-op City, further opening the community to tourism and providing direct access to Penn Station for local residents. Additionally, the Empire State Poverty Reduction will bring together state and local government, nonprofit and community groups to design and implement coordinated solutions to address poverty in Bronx communities.