Governor Andrew M. Cuomo today announced the state has surpassed the halfway mark in its $542 million, Empire Bridge program, a key piece of New York’s commitment to rebuilding critical infrastructure. The Empire Bridge program, administered by the New York State Department of Transportation, is replacing 100 aging, vulnerable, and out-of-date structures across the state. The remaining 47 bridges are under construction or are scheduled to begin work shortly.

Governor Cuomo was onsite today for the final demolition of the Route 213 Bridge over the Rondout Creek in the town of Marbletown, one of six state-owned bridges in Ulster County being replaced as part of a $27 million design-build contract.

“We’re taking an important step toward building a stronger future with new, state-of-the-art bridges to replace the aging and vulnerable structures along our network,” Governor Cuomo said. “For too long state government was unwilling to take on ambitious projects – opting instead to make repairs which amounted to nothing more than temporary fixes to reoccurring problems. The Empire Bridge program and every infrastructure project we take on shows that New York is getting things done, and building our future for future generations to come.”

The new bridges are located across the State. In addition to the 100 new structures included in the Empire Bridge program, eight bridges on Long Island have been retrofitted. Completion of the Empire Bridge program will afford residents of communities across the State stronger and more resilient bridges, and reduce the potential for highway travel delays and detours during heavy rains and floods.

New York State Department of Transportation Commissioner Matthew J. Driscoll said, “Thanks to Governor Cuomo’s vision, we are moving forward with replacing and reconstructing several structures that are important parts of New York State’s transportation network. This bridge project will make the Hudson Valley safer and will ensure mobility and access for emergency responders during natural disasters.”

The previous 275-foot, three-span structure over Route 213 that was demolished is being replaced with a new, single-span 230-foot structural steel bridge with a reinforced concrete deck and abutments founded on piles. The demolition of the old bridge involved the use of explosives placed on the structure to fracture the steel trusses. Work on the new $12.4 million Route 213 Bridge includes the removal of the existing superstructure and substructure; replacement of the existing structures with new foundations, substructures, superstructure and approach slabs; and other approach work.

Sidewalks will be built to safely accommodate pedestrians traveling from the bridge to view the nearby waterfall. Work on the bridge and its closure began earlier this month. Prior to today’s demolition, the bridge decking was removed, limiting the amount of dust and debris that could fall into the creek. The bridge will remain closed with a detour in place while the bridge undergoes reconstruction. It is expected to be open to traffic by this summer. 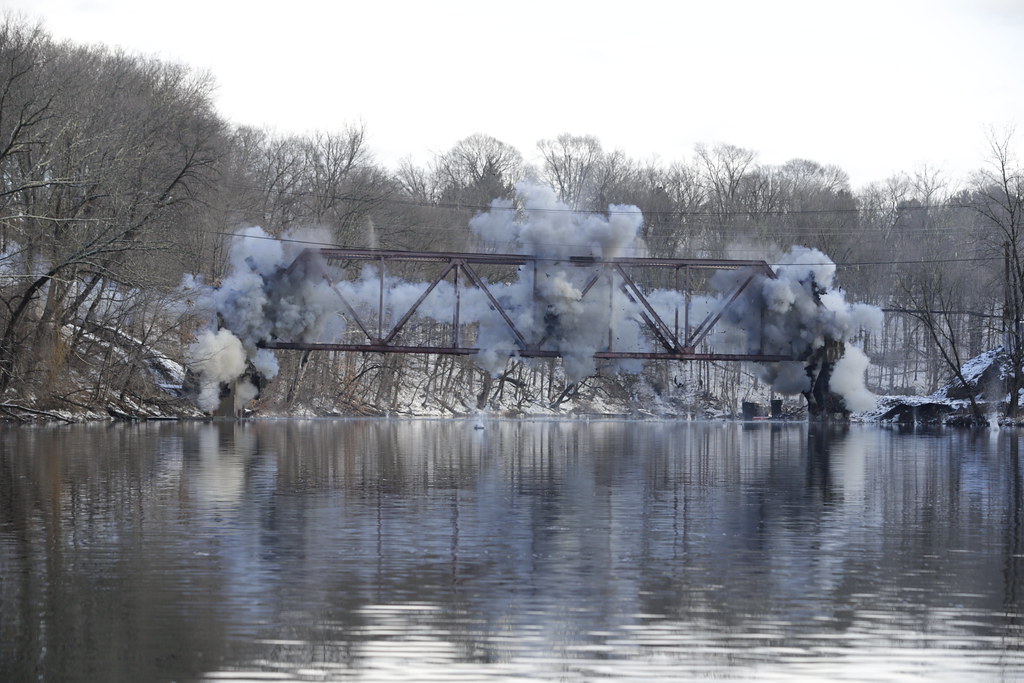 The six Ulster County bridge replacements are utilizing Design-Build contracting. Design-Build allows for the combining of design and construction services into single contracts on vital infrastructure projects to save time on project completion and taxpayer money. Design-build provides cost certainty for the state with contractors assuming the risk for project delays and cost overruns.

Video of the Rt. 213 Bridge demolition is available on YouTube here and in TV quality (h264 format) here.

A full list of projects being completed under the Governor’s Empire Bridge Program is available here.

Senator Joe Robach, Senate Transportation Committee Chairman said, "Certainly New York's infrastructure needs are great, but I am excited to see that this state funding, earmarked in last year's budget for the five year capital improvement plan, is going out the door to address this project and others across the state."

Assemblyman Robert Rodriguez, Chairman of the Assembly Subcommittee on Infrastructure said, “Ensuring the safety of New Yorkers as they travel our roadways and bridges is paramount.  I look forward to working with Governor Cuomo and the Department of Transportation on our initiatives as we rebuild and strengthen our infrastructure.

Senator Elaine Phillips, Chair of the Senate's Infrastructure & Capital Investment Committee said, "A strong, modern infrastructure facilitates economic growth, which is why New York State must continue to prioritize these investments. The improvements being made through this program will make these bridges safer, more resilient and better able to transport people and goods. Continuing this important progress is a priority which Governor Cuomo and I share.”