Project Focus Shifts to Testing and Commissioning of Project Systems Such as Power Communications, HVAC, Security, and More

Governor Andrew M. Cuomo today announced the completion of civil construction on East Side Access - the MTA's megaproject connecting the Long Island Rail Road to a new 350,000-square-foot passenger terminal under Grand Central Terminal. This is the largest new train terminal to be built in the United States since the 1950s and the first expansion of the LIRR in more than 100 years. The new connection will double the LIRR's capacity into Manhattan with up to 24 trains per hour and cut travel time for Queens commuters by 40 minutes per day.

"East Side Access is one of North America's largest transportation projects--an audacious $11 billion idea changing the entire regional transportation system," Governor Cuomo said. "Thanks to the hard work of the so many people, major construction on this transformative project is now complete and we are proud to announce East Side Access will open up next year--significantly cutting travel times and easing the commute into Manhattan for countless travelers. I've been through a lot of difficult infrastructure projects during my time in government, and while this project may have been one the most difficult to get accomplished, its completion will have a huge impact on New York's economy and vibrancy for generations to come and serve as yet another example of what New Yorkers can do when we put our minds to something."

"When I came to the MTA in 2018 one of my first actions was to do an in-depth review of East Side Access," said Janno Lieber, President of MTA Construction & Development. "We doubled down on this project - expressing faith in its fundamentals but overhauling the way we were pursuing it. In the past, when challenges were encountered, the answer was to push back the project completion date. We put an end to that and committed this project would be completed in 2022 as had been promised. Today's announcement is an affirmation that our approach is working."

Governor Cuomo and MTA Construction and Development President Janno Lieber today led a tour of the project. The Manhattan concourse includes a 350,000-square-foot LIRR passenger concourse just below street level that will offer new entrances along Madison Avenue, 25 retail storefronts, WiFi and cell service, new art installations and digital signage with real time train information. The entrance in 347 Madison Avenue being built at 45th Street as part of the redevelopment of the MTA's former headquarters alone is expected to serve 10,000 people a day.

Thanks to the hard work of the so many people, major construction on this transformative project is now complete and we are proud to announce East Side Access will open up next year--significantly cutting travel times and easing the commute into Manhattan for countless travelers.

Seventeen hi-rise escalators, 182 feet in length and the longest in the MTA system, will connect commuters between the new world class concourse and mezzanine of the train terminal 140 feet below Park Avenue. The mezzanine in turn leads to an upper train level that has two platforms and four tracks, and a lower train level that similarly has two platforms and four tracks.

Trains will enter the concourse from a newly activated tunnel that carries two tracks as it passes under the East River at 63rd Street. The two tracks then fan out to four, then eight on the two levels. 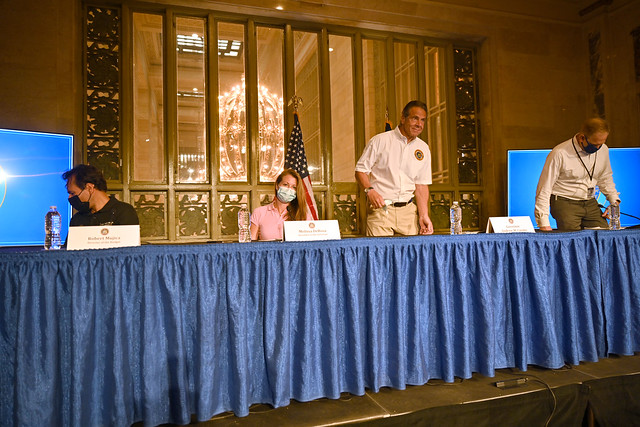 Originally conceived of in the 1960s, the project was developed in the 1990s with work beginning in earnest in Queens and Manhattan in 2006. East Side Access contractors have accomplished several engineering feats over the years, including blasting under Grand Central with limited impact to rail operations, mining under both Northern Boulevard and the elevated and underground subways in Queens and expanding the capacity of Harold Interlocking, the busiest train interlocking in North America.

In addition to relieving congestion at Penn Station, East Side Access will enhance New York's competitive standing in the global economy by providing a new link to business centers on the East Side and supporting job growth around Grand Central Terminal.  When the project is complete, operational efficiency through Harold Interlocking will be greatly improved, benefiting travelers all along the Northeast Corridor. For the first time, reverse commuting from New York City to Long Island will be a realistic option for the region and will allow East Midtown and Metro-North Railroad customers to be able to connect to JFK Airport via the Long Island Rail Road and the Jamaica AirTrain.