$29 Million Museum Will Bring 250,000 Visitors per Year to Canalside on the Buffalo Waterfront

Photos of the Museum are Available Here

Governor Andrew M. Cuomo today announced the completion of construction and dedication of the new $29 million Explore & More - The Ralph C. Wilson, Jr. Children's Museum at Canalside on the Buffalo waterfront. The 43,000 square foot stand-alone building houses seven educational play zones, each offering hands-on activities and exhibits that tell the stories of Buffalo for children and families. In addition to creating 40 jobs during the construction phase and adding another 36 full-time equivalent jobs upon opening, Explore & More is expected to bring 250,000 new visitors annually to Buffalo's waterfront.

"This museum is a totally different way to communicate, to educate, to involve and stimulate young people, and to have them experience learning in a way they can actually process," Governor Cuomo said. "It is a fantastic service and a great tourism and development magnet for the region. This museum also demonstrates once again that we are on the other side of the old cynicism about Buffalo and that there is a new optimism that is breeding success for the area's resurgence."

"Today is another monumental day in the history of Buffalo's thriving waterfront," said Lieutenant Governor Kathy Hochul. "The new children's museum will be a significant driver of tourism and growth at Canalside, while at the same time providing a world-class educational experience for visitors and residents. Additionally, as a point of pride for our City, the new museum is dedicated in honor of Ralph C. Wilson, Jr., a pillar of the Buffalo community whose philanthropy and generosity continue to live on in signature projects across Western New York."

Located at the corner of Lloyd Street and Marine Drive, the museum was built on the terminus of the original Erie Canal, where replica canals and bridges have become year-round family and tourist destinations. As the newest attraction to the site, Explore & More tells the "Story of Buffalo" through seven educational play zones which include:

This museum is a totally different way to communicate, to educate, to involve and stimulate young people, and to have them experience learning in a way they can actually process.

In addition to the play zones, the four-story brick museum houses a family-friendly café and party room overlooking the Canal Towpath, along with a Buffalo themed gift shop, The BFLO Store. The lower "towpath" level features the café and two party spaces with outdoor patio seating along the picturesque canals. The main second floor features east and west entrances and the gift shop, opening up to a brightly lit two story space. The third floor provides an ideal location for several exhibits and views of the Buffalo River. The fourth floor features private office space, a conference room, several exhibit spaces, activity studios and a rooftop terrace offering magnificent views of the city skyline.

Today, the Explore & More building was officially dedicated in gratitude to all of the public, private and corporate entities and individuals who helped bring this community vision to life and to the memory of former Buffalo Bills owner Ralph C. Wilson, Jr. whose foundation named in his honor selected Explore & More as a recipient of $6 million in matching grant funds.

Mary Wilson, Life Trustee of the Ralph C. Wilson, Jr. Foundation, was on hand to see her late husband's name added to the Explore & More name on the building and to say a few words in his memory about his passion for this city.

While exhibit testing is currently underway, the museum will officially open its doors to the public later this month.

Empire State Development President, CEO and Commissioner Howard Zemsky said, "Explore & More Children's Museum at Canalside is another milestone in the rebirth of Buffalo's historic waterfront, creating a world-class tourist destination that will enrich children's lives for years to come."

Mary Wilson, Life Trustee of the Ralph C. Wilson, Jr. Foundation, said, "We are so excited to see children and families from Western New York and beyond, flock to the new Explore & More - The Ralph C. Wilson, Jr. Children's Museum. Ralph would have loved being here today with his name on a museum that will bring joy and fun to a community that he loved so dearly. That is how he lived his life."

Museum CEO Michelle Urbanczyk said, "It's a new day for play in the city of Buffalo and we couldn't be more excited to realize the completion and dedication of Explore & More. With the help of so many supporters, the dream of building a world-class children's museum at the heart of Canalside, celebrating the power of child-led play, has become a reality. We're thrilled to have created a space where all children can play into their fullest potential."

Erie Canal Harbor Development Corporation Chairman Robert Gioia said, "Explore & More is an important addition to the region's already successful Canalside. The museum will have a long-lasting impact on Western New York as a whole as well as the young minds and families that experience the creative learning and play options inside the incredible space."

John R. Koelmel, Chairman of the New York Power Authority, said, "Having a first-rate children's museum at the heart of the Buffalo waterfront opens up a whole new world of exploration to families while providing an economic boost to the entire Western New York region. Children and families from all over New York and beyond, regardless of socioeconomic status, will benefit from the opportunity to learn about the unique Buffalo Niagara area and engage in hands-on play that sparks the imagination. This all-about-fun museum is a great addition to our community and one in which the Power Authority is extremely proud to have played a role."

Erie Canal Harbor Development Corporation has provided nearly $9 million toward the core and shell of the new building. That funding stems from an agreement with the New York Power Authority (NYPA) as part of the relicensing of the Niagara Power Project in 2007. In 2016, NYPA awarded $1.7 million from its Western New York Economic Development Fund to help with exhibit planning and interior construction. Another $300,000 was awarded from NYPA's Environmental Justice Program for energy efficiency upgrades. Explore & More has been raising the remainder of the $29 million project through its Play It Forward Capital Campaign.

The state has committed more than $90 million to transform Buffalo's Inner Harbor into what is now known as Canalside, a mixed-use urban entertainment destination that has received national and international attention as one of the key drivers of the remarkable resurgence of Western New York. Open to the public since May 2008, Canalside features several fully restored facets of the original Erie Canal, including the Commercial Slip, Boardwalk and the Historic Replica Canals. A year-round attraction that hosts nearly 1.5 million visitors annually, Canalside boasts a wide array of events, concerts, festivals, family activities, attractions, historical and cultural programming, art, food and tours that capitalize on and showcase the diverse resources of the Western New York region. In addition, the Historic Replica Canals are frozen in the winter months to become New York State's largest outdoor ice-skating rink. 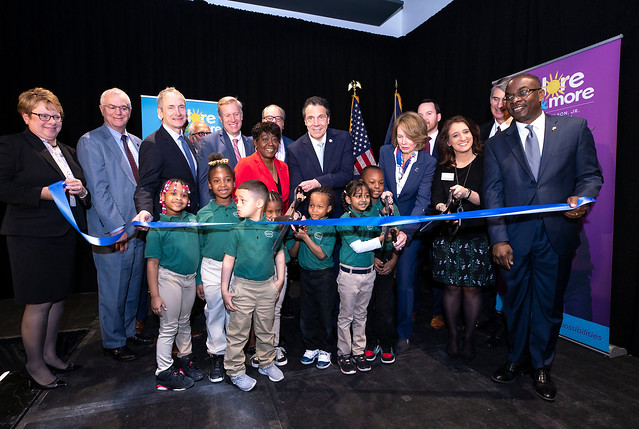 Congressman Brian Higgins said, “Explore & More has a long served as a family destination in Western New York at its East Aurora site and was an early provider of programing at Canalside. This expansion and relocation of the museum to the Buffalo waterfront serves as a natural fit, building on the family atmosphere and contributing to a diverse array of experiences available to both Western New Yorkers and all who visit Buffalo’s waterfront.”

Senator Tim Kennedy said, "With the completion of Explore & More - The Ralph C. Wilson, Jr. Children's Museum, we're taking additional steps to engage families at Canalside with educational and interactive opportunities for children, all while creating new jobs and generating thousands of new visitors every year. This project is evidence that our waterfront continues to transform into a destination for all ages, and I thank Governor Cuomo for his commitment to this project and to Western New York's families."

Senator Chris Jacobs said, "This is a great day for Western New York. This state-of-the-art facility will enhance childhood learning through play and active engagement while serving as a powerful economic catalyst for the entire region."

Assembly Majority Leader Crystal D. Peoples-Stokes said, "Explore and More - The Ralph C. Wilson, Jr. Children's Museum connects two of our most important natural resources: Our waterfront and our CHILDREN! Now, families will be able to explore the rich history of the region in a fun and educational way. In addition to attracting hundreds of thousands of people to the region and generating millions, the museum will also create jobs and economic opportunities for people who live here. None of this would have been possible without the visionary support of our Governor, the Erie Canal Harbor Development Corporation, the Ralph C. Wilson, Jr., Foundation, and the New York Power Authority."

Assemblymember Sean Ryan said, "I'm excited to see Explore and More become the latest attraction that will bring new visitors to our waterfront. This state of the art facility will provide hours of fun and excitement for children, while educating them about the culture and history of Western New York. I'm thrilled to see the continued development at our waterfront and I'm looking forward to seeing what comes next."

Erie County Executive Mark Poloncarz said, "Explore and More Children's Museum brings excitement, education, and young minds together at Canalside to explore our area's history, cultures, and much more. This is a great addition to the already-thriving downtown spot and is sure to bring families and out-of-town visitors to experience the attractions at the Buffalo Waterfront."

Buffalo Mayor Byron W. Brown said, "This world-class facility is yet another symbol of the transformation and economic growth we're seeing in neighborhoods citywide and I'm thankful to Governor Cuomo for helping us make the new $29 million Explore & More - The Ralph C. Wilson, Jr. Children's Museum at Canalside a reality. Since day one, my Administration has focused on making Buffalo a City of Opportunity for all people, a City that promotes our diversity as a strategy for building an economically inclusive City where every resident has a path to success. Today, we pay tribute, once again, to the Late Ralph C. Wilson, an outstanding leader whose dedication continues to provide hope and opportunity for future generations, as we celebrate a museum that will soon delight children of all ages and all abilities, including those with special needs."

About Explore & More  Explore & More Children's Museum was founded 25 years ago on the principle that play is essential to healthy development in children. The mission is to provide best-in-class play experiences where all children, families and the community can explore, learn and develop together. In 2019, the Museum moved from a 6,000 sq. ft. East Aurora location while preparing the exciting launch to a new 43,000 sq. ft. location at Canalside in Buffalo. On May 2, 2019, Explore & More - The Ralph C. Wilson, Jr. Children's Museum was officially dedicated. The new four-story museum is expected to see 250,000 visitors per year.