Governor Andrew M. Cuomo today announced that beginning June 1, Sahlen Field will have a fully vaccinated fan section for the return of the Blue Jays to Buffalo for the remainder of their Major League Baseball season. Approximately 50 percent of the stadium's available seating will be used for fully vaccinated fans. Fully vaccinated attendees will be spaced next to one another, instead of 6 feet apart, in these assigned, seated sections. The remaining fan sections will have 6 feet of physical distance between spectators. Through this new seating model, an additional 2,000 fans than originally planned will be able to enjoy games in Buffalo.

"As our positivity and hospitalization rates continue to decline and the number of New Yorkers getting vaccinated goes up, we are closely monitoring the metrics to guide our reopening strategy," Governor Cuomo said. "We've already determined that it is safe to increase capacity and create vaccinated fan sections for larger outdoor venues and thanks to our continued progress we can now allow even more spectators into Sahlen Field for Blue Jays games beginning June 1. Sporting events have always been a major economic engine for the Western New York region, and putting more fans in the stands to enjoy watching Major League baseball in Buffalo will further this region's progress as they recover and rebuild from this pandemic."

The Governor joined with State, local, and community leaders for today's announcement at Sahlen Field, the home of the Buffalo Bisons since 1988, and for the second straight year, the temporary home of the Toronto Blue Jays. The Blue Jays played in Buffalo last summer without spectators due to health and safety protocols that were in place during the COVID pandemic. The last major league baseball game played in front of fans in Buffalo occurred in 1915, nearly 106 years ago, when the Buffalo Blues played at Federal League Park. The Blues were a part of the Federal League, which was a third major league, along with the American and National Leagues.

We've already determined that it is safe to increase capacity and create vaccinated fan sections for larger outdoor venues and thanks to our continued progress we can now allow even more spectators into Sahlen Field for Blue Jays games beginning June 1.

Today's announcement builds on Governor Cuomo's recent measures to further reopen the economy given significant progress in vaccinations and sustained reduction in COVID-19 cases and hospitalizations. As of yesterday, 59% of Western New York's adults had received at least one vaccine dose and 48% had completed their vaccine series. 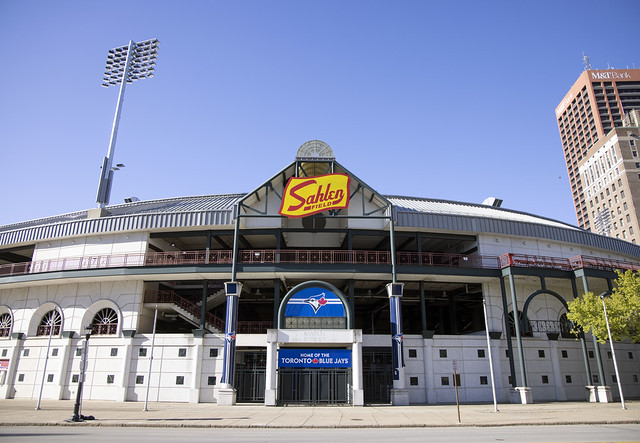 Last week, Governor Cuomo joined with MLB's Yankees and Mets to announce that at large-scale outdoor event venues, fully vaccinated attendees assigned to sections that are designated solely for fully vaccinated individuals could operate at 100% capacity within those seated sections. Individuals seated in those sections will have to provide proof of full immunization status, which can be provided through paper form, digital application or the State's Excelsior Pass. Children who are not yet eligible for the vaccine may accompany and be seated with a vaccinated adult in a fully vaccinated section.