Governor Andrew M. Cuomo today announced the state has acquired more than 6,000 acres of protected lands in Oswego County, the largest additions to state lands in Central New York in 45 years. These areas include approximately 2,825 acres of lands along the Salmon River, an internationally acclaimed fishing destination, and 3,236 acres of working forestland in the nearby towns of Redfield and Orwell. This forestland acquisition will help to secure the working landscape of the Tug Hill region that provides vital economic support to local communities. A map of the acquisition is available here.

"Protecting valuable natural resources in New York’s pristine Salmon River and Tug Hill region benefits the environment, bolsters economic opportunities for local communities and preserves the unparalleled natural beauty of the region for future generations of New Yorkers," Governor Cuomo said. "The Salmon River is a regional treasure, home to some of the best salmon and trout fishing in the world, and by protecting Tug Hill forestland we ensure ongoing timber resource production, safeguard the water quality of the Salmon River, and ensure public access to the region's outdoor recreation opportunities."

Rose Harvey, Commissioner of the Office of Parks, Recreation and Historic Preservation, said, “Today we are taking yet another step forward to protect our natural resources for all New Yorkers. Under Governor Cuomo’s leadership, New York is making new investments in recreational sites like the Salmon River all across the state, creating new opportunities for residents and tourists alike. The Governor recognizes the vast opportunities for outdoor fun across the state. Whether you’re into fishing, hunting, camping, hiking, biking or snowmobiling, New York State’s spectacular outdoors have something to offer everyone.”

The state acquired the land as a result of a 2005 consent decree brought by the State of New York asserting that Niagara Mohawk and certain other New York utilities had violated provisions of the federal Clean Air Act in operating various power plants throughout the State. To settle the case, Niagara Mohawk entered into an agreement to transfer land in the Salmon River area, valued at about $3 million at the time, to the State of New York for conservation, recreational and educational purposes. National Grid will continue to operate and maintain its electric transmission and distribution facilities located within these lands, which facilities provide essential services to customers in upstate New York.

DEC will propose regulations to protect the 1,700 acres lying adjacent to the Salmon River to preserve the river corridor by controlling camping, campfires, snowmobiles, and target shooting. The proposed regulations will be consistent with public use of the property while owned by National Grid. DEC also anticipates establishing new trails along the property, constructing new parking areas, and increasing hunting and trapping opportunities on lands that will be designated State Forests. DEC is developing a recreation and restoration master plan for the Salmon River lands, which will be released for public comment later this year. DEC has already announced $500,000 in stream restoration work along the river corridor.

Built in 1980, DEC’s Salmon River Hatchery provides all of the Pacific salmon stocked into the Great Lakes. Lake Ontario stocking annually includes: 1.76 million Chinook fingerlings; 245,000 yearling and fingerling Coho; 623,000 steelhead and rainbow trout; 50,000 landlocked salmon; more than 392,000 brown trout; and in cooperation with federal partners, DEC stocks 500,000 lake trout in an effort to restore this species to the Great Lakes.

DEC has invested more than $1 million to improve the Salmon River Hatchery facility, and additional investments of more than $2.2 million in 2017 and 2018. Recent infrastructure repairs to improve the hatchery facility include a new roof, visitor center floor, and updated water supply pipeline. In addition, wells at the facility are being rehabilitated to increase the quantity of high quality well water and a conceptual study for a water reuse system was recently completed. This project is now in the design phase.

A priority conservation area in the State’s Open Space Plan, the 3,236-acre Kendall property located north of the Salmon River Reservoir, is embedded in a landscape with existing state lands and working forest easements. The Conservation Fund purchased the land in 2015 at the State’s request through its Working Forest Fund® with generous support from the Richard King Mellon Foundation. DEC recently took ownership of the Kendall property using $4,750,000 from the State’s Environmental Protection Fund.

The new State Forest land will help to stem the tide of rural land division, which typically costs towns more money in services than they receive in property taxes. State ownership of working forests like Kendall is supported by towns because it helps retain traditional access and jobs while protecting town budgets. Located within Audubon’s Tug Hill Important Bird Area, the forestland also supports nearby wetlands that provide vital habitat to a variety of migratory birds that thrive in quiet, interior forest settings.

Under the FY 2017 budget, Governor Cuomo’s NY Open for Fishing and Hunting Initiative provides $3 million for State land access projects and $4 million for hunting and fishing infrastructure. The FY 2016 budget also created a new capital account, which, along with federal Pittman-Robertson funds, will be used to manage, protect and restore fish and wildlife habitat and will improve and develop public access for fish and wildlife-related recreation.

This year’s commitment builds on the previous $6 million in funding for 50 new projects to provide access to approximately 380,000 acres of existing State lands for recreation, including boat launches, bird-watching areas, trails and hunting blinds, and $8 million for upgrades and improvements to fish hatcheries statewide. 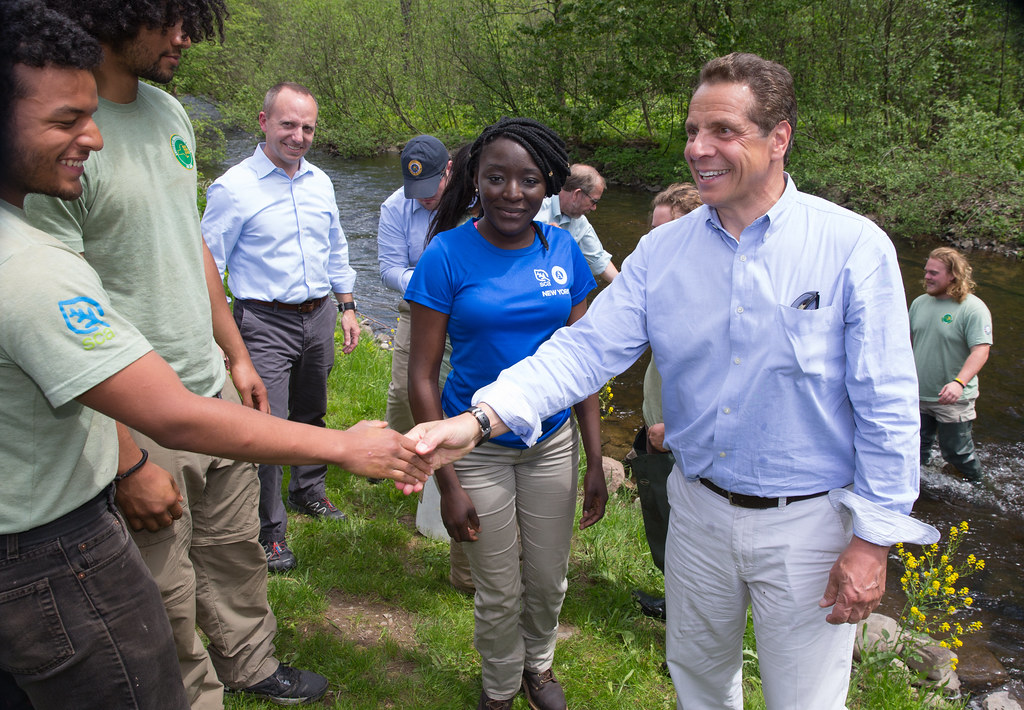 Attorney General Eric Schneiderman, whose office reviewed and approved the transaction, said, “A stable environment that can be enjoyed by all New Yorkers is critical to the sustainability of our state. I am pleased that this pristine area will be preserved and protected for years to come."

Senator Patty Ritchie said, "The Salmon River is one of the state’s greatest natural waterways, attracting anglers from all over the world with world-class opportunities for fishing, while at the same time boosting the local economy and creating jobs. I applaud this land acquisition, which will help protect the Salmon River for anglers and those who will enjoy it in the future, as well as further increase tourism activity in Central New York.”

Assemblyman Will Barclay said, “I applaud Commissioner Seggos and the DEC for their determination in bringing this land acquisition along the Salmon River to completion. The acquisition of this property by the state will be of great benefit to the public, to anglers and to those who rely on the tourism in this area, which can only increase due to addition of accesses. I would like to thank the Governor, the Commissioner, and DEC staff for their work on this.”

Pulaski Mayor Karl Hax Jr. said, “We’re thrilled with Governor Cuomo’s leadership to increase protection of critical habitat in the region which is essential to expanding and enhancing outdoor recreation in our community. Our economy is built on tourism from fishing, and I applaud the work of DEC and the Governor's administration.”

Tom Duffus, Vice President and Northeast Representative for The Conservation Fund, said, “The abundant and often remote forests and waters of Central New York’s Tug Hill region are essential to the surrounding communities for the economic benefits they provide through the timber industry and more increasingly via one-of-a-kind outdoor recreational activities, like hunting, world-class sport fishing, and snowmobiling in some of the heaviest snowfalls in the U.S. We’re pleased to continue our partnership with NYS DEC and towns like Redfield to protect forestland of community- and state-wide importance; we are grateful to the ongoing support from the Richard King Mellon Foundation and the Environmental Protection Fund; and we are committed to finding conservation solutions that enhance community vitality.”

Melanie Littlejohn, Upstate New York Executive Director for National Grid, said, “National Grid is pleased to reach an important milestone on a significant transfer of land along the Salmon River to the State of New York. We take seriously our commitment to sustainability, environmental stewardship, and the partnerships we support on behalf of our customers and this agreement will help preserve a spectacular natural resource for generations of outdoor enthusiasts in the local communities we proudly serve.”

Jim Howe, The Nature Conservancy’s Central and Western New York Chapter Director, said, “From its headwaters on Tug Hill all the way to Lake Ontario, the Salmon River provides critical habitat for wildlife and limitless enjoyment for outdoor enthusiasts. We commend Gov. Cuomo and the DEC for their leadership in preserving the Salmon River for future generations. By acquiring these lands, New York State will be able to protect this region for people and nature. We congratulate the State on this huge win for the Salmon River, a natural and economic treasure.”

David Turner, Director of the Oswego County Department of Community Development, Tourism and Planning, said, "Fishing is a multi-million dollar business in Oswego County and the Salmon River is the heart of it. Anglers come from all over the U.S and literally around the world to fish here - from British Columbia, Brazil, China, Costa Rica, Germany, Ireland, Denmark, Japan, and Russia. They stay overnight, hire fishing guides, eat in our restaurants, and purchase tackle and other products. This land acquisition will allow the DEC to further enhance the opportunities and outdoor experiences that people enjoy in Oswego County."

Katie Malinowski, Executive Director of the New York State Tug Hill Commission, said, "The Salmon River and its watershed are significant natural resources in the Tug Hill region, and our communities are excited to see this acquisition complete. The Tug Hill Commission appreciates the State's effort and investment in securing these lands to provide long-term protection for to benefit water quality, recreational opportunities, and economic development.”

DEC manages 4.6 million acres of public lands, including three million acres in the Adirondack and Catskill forest preserves, 52 campgrounds, seven day-use areas, more than 5,000 miles of formal trails, and hundreds of trailheads, boat launches, and fishing piers. Plan your next outdoor adventure at www.dec.ny.gov/outdoor, and connect with us on Facebook, Instagram or Twitter.