Governor Andrew M. Cuomo today announced Phase Two of the historic redesign and transformation of the New York State Fairgrounds and endorsed the State Fair Task Force recommendation to expand the fair to 13 Days in 2017. Phase Two of the capital program to develop the fair into a year-round destination includes $50 million to develop an 80,000-square-foot, multi-use Exposition Center and an Aerial Gondola to connect visitors to the fairgrounds and Onondaga County’s Lakeview Amphitheater. In addition, a $20 million investment from the Upstate Revitalization Initiative will allow for the construction of a new on-ramp to I-690 West and other improvements to the Orange parking lot, while other fair enhancements will include constructing a new Aerial Sky Ride and offering new, diverse events to attract visitors year-round.

“By reimagining one of New York’s historic and beloved traditions, the first phase of our revitalization has already transformed the New York State Fair experience, strengthening a prized tourism destination in Central New York and generating record-breaking attendance in 2016,” Governor Cuomo said. “I look forward to continuing the State Fair’s momentum with Phase Two and the additional $70 million in investments to get it done. I thank the Task Force members for their quick work and smart recommendations for this next phase. The new State Fair will bring exciting shows, artisans, concerts, and local food and beverages to visitors from across the state and the nation year-round for generations to come.”

In November 2016, Governor Cuomo appointed a State Fair “Phase Two” Task Force of 21 local officials and industry leaders, co-chaired by State Agriculture and Markets Commissioner Richard Ball and Onondaga County Executive Joanie Mahoney. The Task Force was charged with developing new innovative ideas that would build upon the Phase One improvements debuted at the 2016 State Fair and they provided their recommendations to the Governor at the end of 2016.

Taking into full consideration input from the State Fair Task Force, the Governor proposed in his Executive Budget $50 million for two transformational capital projects that will compliment and expand upon the work advanced in 2016.

In addition to these recommendations, the annual fair, which has historically run 12 days, will be extended to 13 days allowing additional time for visitors to enjoy New York’s world-class food and beverages, agriculture, arts, shows, concerts, and more.

In 2017, the fair will also add a new premier attraction to the Midway, the Aerial Sky Ride, which will debut opening day of the fair on August 23rd. The Sky Ride will be built, operated and maintained by Wade Shows Inc. and will feature at least 100 double-passenger seats, giving fairgoers an unmatched view of Syracuse and the surrounding area while ferrying above the fairgrounds expanded Midway. Renderings of the Aerial Sky Ride and additional information are available here.

The new State Fair will bring exciting shows, artisans, concerts, and local food and beverages to visitors from across the state and the nation year-round for generations to come.

Additionally, as a direct result of the State’s investments to improve and expand the fair, new events have already committed to the fairgrounds to offer more entertainment year-round. Right Coast Inc., promoter of the PPG Syracuse Nationals, will bring three brand new events to the New York State Fairgrounds in 2017, including Syracuse SnowCross, Kawasaki Syracuse StadiumCross and the Syracuse Man Show.

The following events will be featured at the Fairgrounds in 2017:

Professional and amateur snowmobile racers from all over the Northeast will battle for cash prizes on the weekend of March 4 - 5, 2017, on what will be their largest track of the racing series season. Syracuse Snocross will be a stop on the East Coast SnoCross Racing Series and will be the first time snocross racing will take place in Syracuse. Racers on highly modified snowmobiles will race around a custom-built track with turns and huge jumps sending some racers distances of more than 80 feet.

The series attracts well over 100 racers and thousands of spectators from all over New England and Canada at every stop. Polaris, Ski-Doo, and Artic Cat will have professional factory teams racing and showing off the latest in snowmobile engineering and technology. Amateur racers will also have the chance to sign up to race on a professional track and test their riding skills. For more information, visit www.SyracuseSnocross.com. 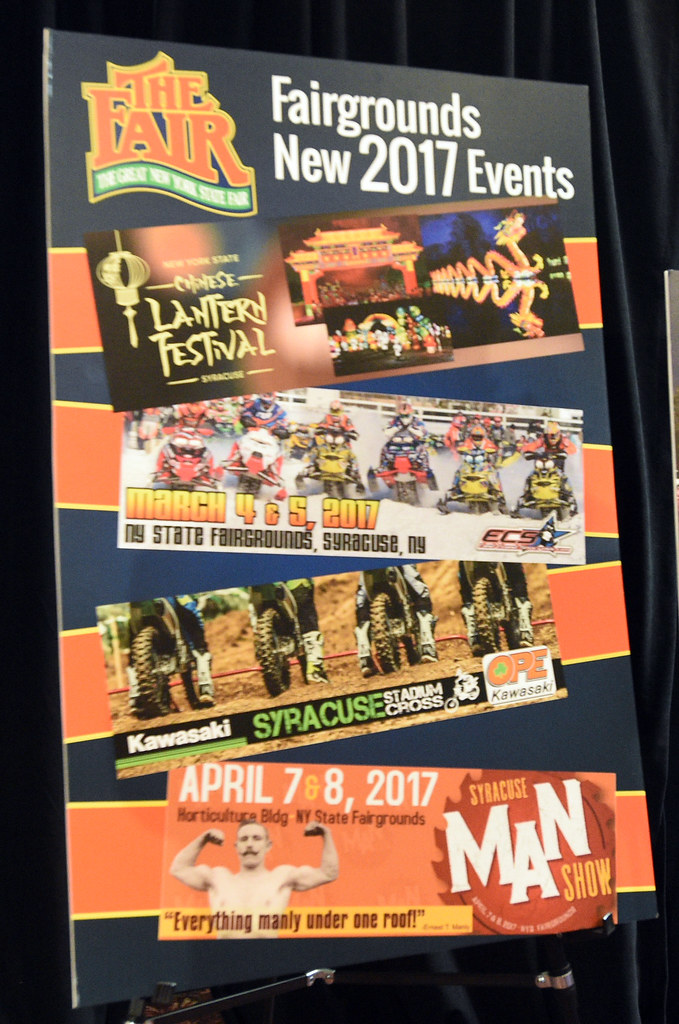 The high flying, adrenaline filled action of indoor motocross racing will also make its first debut ever in Syracuse. The OPE Kawasaki Syracuse StadiumCross will take place the weekend of March 25 - 26, 2017. Racers and fans from all over the Northeast and Canada will converge on the Coliseum at the New York State Fairgrounds.

A custom-built dirt track on the Coliseum floor will take over 550 cubic yards of dirt to build berms, table tops, and high flying jumps. Races will take place in the 3,500 seat coliseum, while the adjacent event center building will house the pit spaces for racers to work on their motorcycles. Nearly 500 racers and thousands of race fans are expected to attend the weekend long event. For more information, visit www.SyracuseStadiumCross.com.

This brand-new event will take place in the Horticulture Building at the fairgrounds the weekend of April 7 - 8, 2017. Vendors will be displaying and selling items for hunting, golfing, fishing, home entertainment, cars, trucks, motorcycles, snowmobiles, ATV’s, skiing, video games, craft beer, power tools, and much more.

Advance Media New York will debut the New York State Chinese Lantern Festival at the fairgrounds from Friday, April 14 to Sunday, June 25. The event will be a festival of light, color and Chinese culture and up to 80,000 attendees are expected. Attendees will follow a path lit by thousands of unique lanterns created in the shapes of animals, flowers and Chinese symbols.

Along the path of the event, which will be located in the newly expanded New York Experience section of the fairgrounds, eventgoers will encounter Chinese dancers, acrobats, face changers, musicians and singers. There will be demonstrations of traditional Chinese crafts such as palm weaving, edible sugar dragons and paintings of visitors’ names in Chinese, and food and beverages will be available. The festival is assembled by Tianyu Arts & Culture from Zigong, China, which produces lantern shows in Asia, Europe, Australia and the United States.

Onondaga County Executive Joanne Mahoney said, “The Governor’s commitment of an additional $70 million investment in the New York State Fair will ensure its tradition and success as a premier family-friendly destination in Central New York continues for generations. With these improvements, Onondaga County looks forward to welcoming even more visitors to Central New York than ever before."

State Agriculture Commissioner & Co-Chair of the State Fair Task Force Richard A. Ball said, “The Governor’s vision for the continued revitalization of the New York State Fairgrounds is innovative and exciting. With the help of the Task Force, we have been able to identify several projects that will significantly improve visitors’ experience and attract new opportunities for the grounds year-round, including for agricultural uses, which will drive tourism and boost the Central New York economy.”

Office of General Services Commissioner RoAnn Destito said, "After the success of the first phase of the project, OGS is prepared to once again partner with the State Fair as we work towards Governor Cuomo's vision to create a new and exciting fair experience for visitors from around the globe."

State Fair Acting Director Troy Waffner said, “Under Governor Cuomo’s leadership, the Great New York State Fair is reaching new heights as an entertainment attraction and an economic development engine. These new improvements will take the fair and fairgrounds to a level few in the nation can match. We are genuinely excited for the future and are actively planning ways to use these new assets to maximum advantage.”

Right Coast, Inc. Promoter of the Snocross, StadiumCross, and Man Show events Rob O’Conner said, “Governor Cuomo's transformation of the Fairgrounds offers us many more opportunities to bring exciting events to Central New York. We are eager to make these into annual events that bring enjoyment to people and help grow our business as well as the economy of the region.”

Syracuse Media Group Vice President of Marketing Annette Peters said, "The Chinese Lantern Festival has traveled throughout Europe and Australia. Its New York State debut is its seventh appearance in the United States. The fact that it is the first event at the New York Experience Festival Park creates even more excitement for this colorful, cultural event."

The 2016 Great New York State Fair generated the highest level of attendance with a record 1,117,630 visitors, making it the nation’s fourth largest state fair. The State’s recent investments in the fairgrounds attracted the biggest crowd in the fair’s 175-year history. The expanded 15-acre Wade Shows Midway set records for revenues and number of rides provided, while fairgoers flocked to the fair's lineup of musical performers and entertainers. The fairgrounds’ new Empire RV Park was also sold out.

The State fairgrounds play host to more than 100 public events operated by private concerns each year, including more than 30 horse shows, major trade and industry shows such as the New York Farm Show, music and food festivals, and many consumer products shows.