Penn Station to Create One Interconnected Train and Subway Complex

Governor Andrew M. Cuomo today unveiled the 30th proposal of his 2020 State of the State: creating the Empire Station Complex - a 21st century transit complex on Manhattan's West Side. During a speech at the Association for a Better New York, the Governor announced the plan to transform the existing Penn Station site, integrate the soon-to-be completed Moynihan Train Hall and acquire the block south of Penn Station to create an expanded, remodeled and interconnected train and subway complex. The plan creates new, larger terminals, and will increase track and train capacity by 40 percent - addressing the underlying and most critical problem at the busiest transit hub in the Western Hemisphere.

"For over a century, New York's transportation infrastructure drove our growth, especially in New York City, and after decades of idle talk without any real action, we are once again investing in large public projects to support a stronger economy. We've built more than any state in the nation, and now we are taking another big step to address one of the weakest links in our transit system," Governor Cuomo said. "This expansion in the block south of Penn — combined with the soon-to-be-completed Moynihan Train Hall and the transformation of the existing Penn facility — will create an interconnected, world-class Empire Station Complex that will expand capacity by 40 percent. This will improve how more than half a million New Yorkers commute, travel and work every day, while transforming Penn into the world-class facility the Empire State deserves."

Critical components of the Empire Station Complex Plan include acquiring the property south of Penn Station to allow for the addition of at least eight new underground tracks that will boost Penn Station's capacity by approximately 40 percent; exploring converting the MSG Theater on 8th Avenue into a world-class entrance into Penn Station; and catalyzing opportunities for development around Penn Station to create a new economic engine for the city and state and a funding stream to help finance improvements to Penn. Amtrak, which owns the existing Penn Station, will participate in planning and financing this historic project. Additionally, the Governor announced New York State, Amtrak and other stakeholders will partner with a consultant design team - led by FXCollaborative - to develop and help carry out our plan to transform the existing Penn Station.

New York's Penn Station is the busiest transit facility in the Western Hemisphere, serving more passengers than John F. Kennedy, LaGuardia, and Newark Airports combined. Every day, more than 650,000 passengers are forced to navigate the station's narrow underground labyrinth, which is notoriously devoid of natural light, consistent wayfinding, or sufficient waiting areas. Penn Station's corridors and waiting areas are overcrowded, its platforms and tracks are over capacity, and it is only getting worse — with delays, mounting maintenance problems, serious safety and security issues and inadequate accessibility becoming regular occurrences.

This new complex, capable of handling more passengers than ever before, will support the State's efforts to reduce congestion -- which include the nation-leading Central Business District Tolling program -- so we can get more people out of theirs cars and into a 21st century mass transit network.

Immediate improvements are already underway, including the new Moynihan Train Hall and an expanded LIRR corridor, which will ease congestion in the short term and enhance the passenger experience. At the same time, regionally significant projects like East Side Access, the LIRR Third Track and the Metro-North Penn Access Project will increase LIRR and Metro North capacity, drawing more commuters into Penn Station. Taken together, these initiatives present both a critical need and a major opportunity to re-envision Penn Station on a grand scale.

For over a century, New York's transportation infrastructure drove our growth, especially in New York City, and after decades of idle talk without any real action, we are once again investing in large public projects to support a stronger economy.

The plan will be overseen by Empire State Development, which will establish a General Project Plan in collaboration with the MTA and Amtrak. MTA will be responsible for the transportation planning components of the project and the plan to transform Penn Station.

Under the Empire Station Complex Plan, the properties on the block south of Penn Station will be acquired, enabling Penn Station's underground infrastructure to grow southward. This represents the first expansion of Penn Station's foundational infrastructure since the station was completed in 1910, and will allow for the creation of at least eight new tracks, boosting track and train capacity by approximately 40 percent. 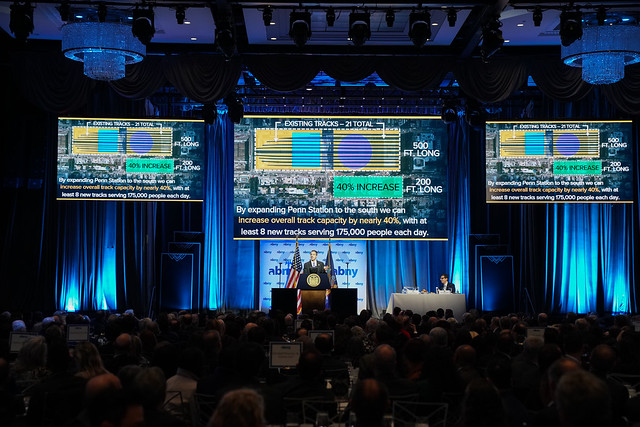 Throughout the process, Empire State Development and the MTA will work with all local community stakeholders, including New York City, Community Boards, civic groups, affected property owners, elected officials and New Jersey Transit, to ensure their needs are represented in the final development plan.

The State will also explore acquiring the Madison Square Garden Theater, allowing for the possibility of opening Penn and creating a new block-long grand entrance at 8th Avenue.

The Plan will also create opportunities for redevelopment on the blocks surrounding Penn Station, setting the stage to transform antiquated and underutilized buildings into a new economic engine for New York. A value-capture framework will combine Payments In Lieu of Taxes (PILOTs) and income from new commercial development in the district to help fund Penn Station's revitalization. Increased income and sales taxes from the district will benefit both New York State and City. Commercial development in the surrounding area will include new entrances and connections for both Penn Station and the subway system, which will further increase transit access for the entire neighborhood.

This transformational plan will greatly improve passenger circulation, decrease passenger and train congestion, and allow natural light to the complex. All of these improvements will facilitate access into, and egress out of the new Empire Station Complex increasing safety and security for the more than 650,000 passengers who travel through the facility daily.