Governor Andrew M. Cuomo today announced $30 million in state funding to support the expansion of Alstom Transportation, Inc., which will add nearly 200 new jobs in Hornell, Steuben County. The project is motivated by Alstom's successful bid to provide Next Generation High-Speed Trains for Amtrak. The expansion will retain more than 1,000 existing positions in Hornell and at Alstom’s operations in West Henrietta. New York State’s support for the project was an important factor in Alstom’s efforts to secure the agreement with Amtrak for the $2.5 billion Next Generation High-Speed Trains program.

"This major expansion of Alstom's world-class manufacturing operations will not only create hundreds of new jobs, but also help drive the economic resurgence of the Southern Tier for years to come," Governor Cuomo said. "Investing in key industries across the state creates jobs and strengthens the economy in every region, and advanced manufacturing is the foundation of long-term, sustainable economic growth."

Alstom, which employs more than 1,000 people in Upstate New York, is a global leader in integrated railway systems and its rolling stock facility in Hornell has been manufacturing and servicing trains for nearly 150 years. The $66.8 million expansion project entails the renovation of existing space at their Hornell facility, which is already one of the is the largest passenger rail manufacturing facilities in North America, adding 60,000 square feet of new production and engineering space and 10,000 feet of new track, including 4,000 feet of test track.

Jerome Wallut, President of Alstom North America, said, "We thank Governor Cuomo and Empire State Development for successfully advancing this region's vision through the Upstate Revitalization Initiative. None of this would have been possible without the Governor's staunch commitment to this region and his continued dedication to making all of Upstate New York thrive. We are honored to be partnered with the State of New York to create jobs and economic opportunities in the Southern Tier. Together, we are investing in people and facilities that will make this region the home of the best trains in the world for generations to come."

The Acela Express contract with Amtrak involves the design and production of 28 Next-Generation High-Speed Trainsets, the most modern and advanced high-speed trains in the world. These trains will be sold in the U.S., with plans to export high-speed train components to global markets as well. Additionally, the contract includes the supply of technical services and spare parts for up to 30 years, with the majority of such worked expected to be performed in Hornell while some work will be at the company’s facility in the Rochester area.

"Investing in key industries across the state creates jobs and strengthens the economy in every region, and advanced manufacturing is the foundation of long-term, sustainable economic growth."

The new trainsets will operate along the Washington – New York – Boston Northeast Corridor, initially at speeds up to 160 mph, and will have one-third more passenger seats, as well as modern amenities such as improved Wi-Fi access, personal outlets, USB ports and adjustable reading lights at every seat, enhanced food service and a smoother, more reliable ride.

Amtrak Board Chairman Tony Coscia said, "Amtrak’s acquisition of new, state-of-the-art trainsets for our premium high-speed Acela service promises to reshape the Northeast Corridor travel market in much the same way Acela did when it was first introduced in 2000. We appreciate the leadership and engagement of Governor Cuomo on this important initiative and look forward to working with our partners at Alstom to deliver the new trainsets in time for revenue service in 2021."

Since acquiring the Hornell site, which has been a major employer for the community for over a century and plays a critical role in the Southern Tier regional economy, Alstom has employed thousands of New Yorkers and invested more than $70 million to ensure it remains a world-leading manufacturing facility in Upstate New York. The Hornell plant has delivered more than 8,000 new or refurbished rail vehicles to customers across North America, including 1,000 subway cars to New York City Transit. Alstom helps 10 million commuters make their way to and around New York City.

Empire State Development President, CEO and Commissioner Howard Zemsky said, "Alstom’s expansion and commitment to create hundreds of new jobs is a huge win for the Hornell community and the entire Southern Tier regional economy. Since taking office, Governor Cuomo has eliminated the corporate income tax on all manufacturers, one of the many reasons we’ve given companies like Alstom to stay and grow here. Advanced manufacturing is a critical industry to the future of Upstate and we couldn’t be prouder that the next generation of high-speed trains will be stamped ‘Made in New York’." 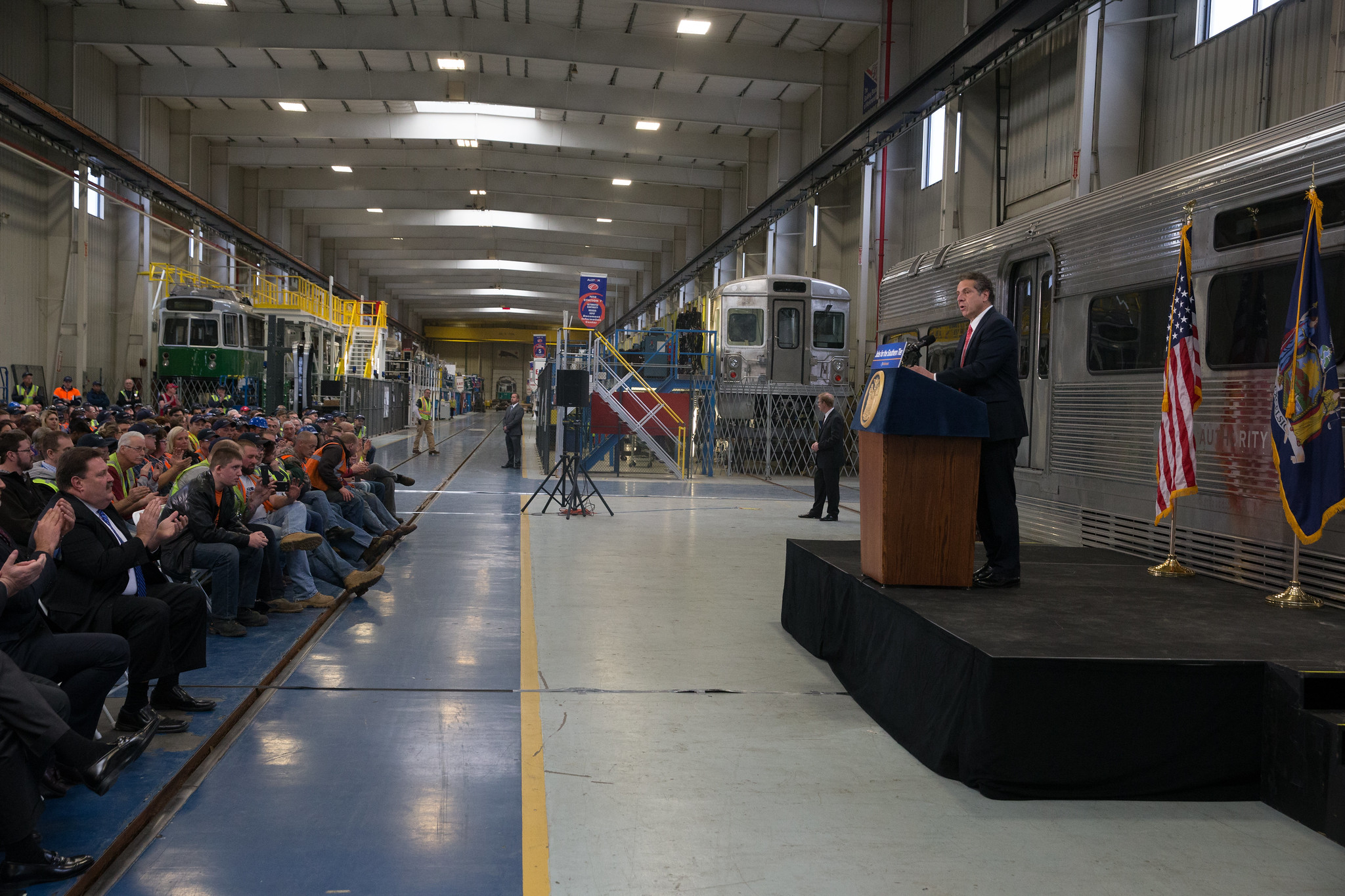 Alstom’s expansion project in Hornell strongly aligns with this strategy and as a result, the State has committed $30 million in URI funding to support project related capital expenditures, including construction, renovation, machinery and equipment. Alstom has committed to create at least 193 new jobs over the next five years and retain 1,025 existing jobs in Hornell and West Henrietta, while investing more than $66 million in the project.

Southern Tier Regional Economic Development Council Co-Chairs Harvey Stenger, President of Binghamton University and Tom Tranter, President of Corning Enterprises said, "This project is a win-win for the Southern Tier and all of New York State. Under the Governor’s, leadership we are making transformative investments in leading industries and improving our transportation network for the 21st century. This initiative strongly aligns with the blueprint advanced by the Governor through his groundbreaking Regional Councils program, and will continue to generate growth and opportunity for the Southern Tier for years to come."

Senator Thomas F. O’Mara said, "Governor Cuomo’s economic strategy of building the strengths of each region is driving economic growth and innovation all over the state. Alstom has a long history with the region, and I am pleased that this relationship will continue to grow with this expansion. This major investment will support the creation of hundreds of new jobs and drive the incredible economic revitalization of the Southern Tier."

Hornell Mayor Shawn Hogan said, "The City of Hornell and its residents have greatly benefited from the transportation industry for more than a century, and we’ve had an excellent partnership with Alstom for the past two decades. We’re very much looking forward to the expanded operations, and new jobs and economic opportunities that it will create. On behalf of the City and her residents – thank you, Governor Cuomo, Alstom and Amtrak for making this possible in our community."

Accelerating Southern Tier Soaring
Southern Tier Soaring is the region’s comprehensive blueprint to generate robust economic growth and community development. The state has already invested more than $3.1 billion in the region since 2012 to lay the groundwork for the plan – attracting a talented workforce, growing business and driving innovation. Today, unemployment is down to the lowest levels since before the Great Recession; personal and corporate income taxes are down; and businesses are choosing places like Binghamton, Johnson City and Corning as a destination in which to grow and invest.

Now, the region is accelerating Southern Tier Soaring with a $500 million state investment through the Upstate Revitalization Initiative, announced by Governor Cuomo in December 2015. The state’s $500 million investment will incentivize private business to invest well over $2.5 billion – and the region’s plan, as submitted, projects up to 10,200 new jobs. More information is available here.