Governor Andrew M. Cuomo today announced an additional $250 million in emergency state resources to remedy the ongoing health and public safety crises faced by 400,000 New York City Housing Authority tenants. In total, the state's commitment over the past several years is now $550 million. The Governor signed an executive order declaring a state of emergency for NYCHA complexes in all five boroughs in order to expedite necessary repairs, upgrades, and construction, as well as address lead paint, mold, and other harmful environmental and safety hazards.

In accordance with the executive order, an independent emergency manager is to be selected within 60 days to oversee the development and completion of a comprehensive emergency remediation plan. Due to the inability of NYCHA and New York City to make the required updates and repairs to Authority properties in a timely manner, the Governor has called for the New York City Mayor, the Speaker of the New York City Council, on behalf of the council, and the president of the NYCHA Citywide Council of Presidents to unanimously select an independent manager to oversee the necessary remediation within 60 days of the executive order. In the event that the Mayor, Speaker and CCOP president are unable to make a selection within 60 days, the Comptroller of New York City shall consult with the parties to make a selection within 14 days. Once selected, the manager must select an independent contractor within 30 days. Once the independent contractor is selected, the unspent portion of the state’s $550 million will be released and the independent contractor will have authority over city funds.

The construction projects will be expedited and cost less through design/build authorization. The projects will also not be subject to NYCHA procurement rules. The design/build authorization for projects required to repair and upgrade NYCHA units will comply with State Minority and Women-Owned Business Enterprises measures and will include employment opportunities for NYCHA tenants consistent with Federal Section 3 requirements.

"At its inception, NYCHA addressed a dire public housing crisis by offering shelter and stability to New Yorkers throughout the five boroughs, but years of mismanagement and neglect have left NYCHA residents with some of the worst living conditions I have ever witnessed," Governor Cuomo said. "After seeing how these families are forced to live their lives every single day, I made a pledge to the people of New York that I would not sign the budget unless funding was dedicated to address the human tragedy that is NYCHA housing. Today, we are delivering on that promise by providing the funding necessary to get the work done that will allow these families the opportunity to lead healthier lives and once again be proud of the place they call home."

Although the state has no legal obligation to fund NYCHA, it has already committed a record $300 million to the Authority. This additional state commitment of $250 million comes after tenants, state and local legislators, as well as health and safety experts raised grave concerns regarding the inhumane and unlivable conditions at NYCHA buildings. In recent weeks, the Governor has toured several NYCHA units, experiencing first-hand and working to expose these deplorable conditions to the people of New York.

Chronic mismanagement and neglect has led to widespread disrepair in NYCHA buildings, including unabated lead paint, mold, and lack of heat and hot water throughout the winter months. City officials determined that it would take four years to replace the failing boilers, leaving tenants without heat and hot water for an unreasonable amount of time. In addition, under the Governor's direction, the Department of Health conducted a formal investigation into NYCHA for health and safety hazards, which uncovered the gravity of the public health risks. The determinations of the Department's findings, summarized in a report to the Governor, indicate that NYCHA-owned properties may present an imminent threat to the health and safety of over 400,000 residents living in these properties, especially children.

After seeing how these families are forced to live their lives every single day, I made a pledge to the people of New York that I would not sign the budget unless funding was dedicated to address the human tragedy that is NYCHA housing.

Senator Jeffrey D. Klein, Independent Democratic Conference Leader, said, "For years, members of the Independent Democratic Conference demanded an Independent Monitor, transparency and funding to fix the deplorable conditions in New York City's most affordable housing stock, NYCHA. Today, we put out the welcome mat to a new era for the 400,000 tenants who for too long suffered under management's watch through subhuman conditions through an Emergency Declaration that installs an Independent Monitor, an additional $250 million that brings available funding to $550 million to remediate mold, lead, and to repair boilers and the most critical issues."

New York City Public Advocate Letitia James said, "The current conditions at NYCHA buildings are nothing short of deplorable. This $250 million investment is exactly the support the families in NYCHA buildings need to secure the heat and hot water that they have gone weeks without and to remove the decades-old mold and lead paint that they have suffered with for far too long. No one deserves to live like this, and I applaud Governor Cuomo and the legislature for stepping in to improve the health and safety of these New Yorkers."

New York City Comptroller Scott M. Stringer said, "The conditions plaguing NYCHA developments are horrific — and our audits over the last four years have told the story of the challenges New Yorkers face in their own homes. I applaud the Governor for providing record funding for repairs that will help alleviate problems caused by a generation of mismanagement. Residents deserve better, and this investment will support critical improvements to raise quality of life for those living in NYCHA apartments."

New York City Council Speaker Corey Johnson said, "We have heard horror story after horror story from New York City residents living in poor conditions at NYCHA housing. The $250 million dollars approved in the State budget will go a long way to remedy some of these conditions. I want to thank Governor Andrew Cuomo, Speaker Carl Heastie and the Assembly for providing the support these New Yorkers so desperately need." 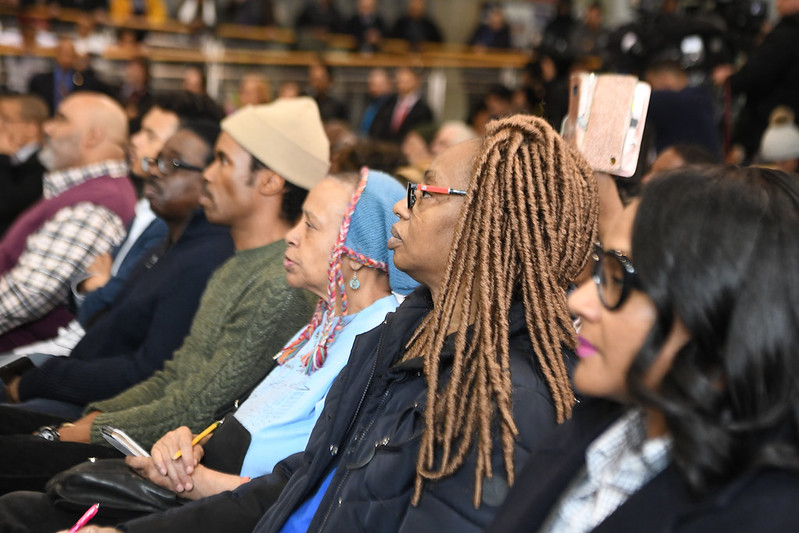 Manhattan Borough President Gale Brewer said, "Government made a promise to NYCHA tenants to provide safe, clean, affordable housing, but too often that promise is broken. NYCHA tenants deserve action from every level of government. The delivery of hundreds of millions in state funds to make sorely-needed repairs is welcome news."

Bronx Borough President Ruben Diaz Jr. said, "NYCHA residents continue to suffer due to the many instances of mismanagement and incompetence that have plagued this housing authority. In many cases, tenants have gone without basic necessities like heat and hot water, and some apartments even contain decades-old mold and lead paint, and we cannot allow the families that call NYCHA their home endure these conditions any longer. I commend the Governor for investing in the health and safety of NYCHA residents, regardless of the fact that the state has no legal obligation to fund the authority, and ensuring that residents of our public housing system have the safe homes they are entitled to and deserve moving forward."

New York City Council Member Ritchie Torres said, "The administration and leadership of NYCHA have failed their residents and mismanaged the agency to the point that families have been left without heat or hot water and made to live in apartments filled with mold and vermin. On top of this, they are then told that these issues will take weeks, if not months or years, to be resolved, and neither the city nor the federal government have lifted a finger to do anything about it. Governor Cuomo, who has no obligation to do so, has provided the hope these resident need by stepping in and committing over half a billion dollars in state resources to make much needed repairs and improvements. I applaud his leadership and his commitment to those that the NYCHA bureaucracy would rather forget."

New York City Council Member Robert Cornegy said, "Addressing the dire situation facing tens of thousands of NYCHA residents in my district, and hundreds of thousands more across this city, has made finding an expeditious resolution to the mismanagement crippling NYCHA critically important. I am grateful to Governor Cuomo for his leadership in bringing these issues to the fore and advocating for increased funding and expedited repairs. I will continue to advocate alongside the Governor, my colleagues in government, and the many residents of NYCHA until the crises facing this housing authority are resolved and the New Yorkers they serve are afforded the dignity they deserve."

New York City Council Member Alicka Ampry-Samuel said, "For years, families living in public housing have lived with substandard circumstances including the lack of heat and hot water. In the state budget, Governor Cuomo, dedicated $250 million to help alleviate the situation at NYCHA and provide a much-needed influx of resources for NYCHA capital improvements citywide. Finally, NYCHA residents are being recognized as families that deserve: attention, warm and safe homes, and repairs to maintenance issues that have existed or developed over decades. With the $250 million allocation, Governor Cuomo is sending a clear signal to New York—these families matter to all of us."