$300 Million Appropriated To Increase The Resilience of Shoreline Communities

Governor Andrew M. Cuomo today announced the completion of the first round of dredging at Port Bay, in Wayne County, the first of 20 dredging sites selected across the region to address a backlog of projects at harbor navigation channels along the southern shore of Lake Ontario and the St. Lawrence River. The $15 million regional dredging initiative is part of the State's $300 million effort to repair and build resiliency in communities recovering from damage caused by high water levels and flooding, with the next round of dredging to commence at Blind Sodus Bay, Wayne County in April 2020.

The Governor made the announcement during a stop at Sandy Pond, where a $600,000 REDI award for the North Sandy Pond Resiliency Project will help the Town of Sandy Creek strengthen the barrier bar dividing Sandy Pond and Lake Ontario. Multiple phases of dredging will provide a substantial amount of sediment for beneficial reuse and help to maintain the balance of natural coastal processes, while protecting property and infrastructure, and ensuring reactional access to the waterfront.

"New Yorkers living and working along the shorelines of Lake Ontario and the St. Lawrence River are still reeling from last year's record flooding that devastated their communities," Governor Cuomo said. "We are doing everything we can to help these communities build back stronger than before. We have completed the first round of 20 dredging projects, beginning with Port Bay, as part of our $300 million initiative to repair and rebuild resiliency by creating natural storm barriers along the region's waterfront, which will ensure a better and stronger future for lakeside residents."

The first REDI project completed is at Mexico Point State Park in Oswego County where record-high water levels at Lake Ontario in 2017 and again in 2019 caused devastating damage to the shoreline. In just four weeks, 435 linear feet of shoreline was stabilized with the placement of 3,200 tons of stone. The project, which was completed ahead of schedule on February 6, will preserve public access to Lake Ontario at Mexico Point Park and protect the local economy through the continued attraction of visitors.

At a Resiliency and Economic Development Initiative Conference in Albany in November 2019, the Governor introduced the $15 million Regional Dredging Project to the representatives of communities slated to receive REDI grants, letting them know that later that month field teams would be identifying areas to be dredged and developing a timeline for implementation. Underwater surveys for approximately 20 potential harbor locations were planned, and in early December the first was completed at Port Bay in Wayne County.

The funding complements Governor Cuomo's creation of REDI, which includes a multi-agency commission that has been studying ways to strengthen infrastructure along Lake Ontario's waterfront while bolstering the region's local economies. Through REDI, the State has committed up to $300 million, for 133 projects, to rebuild the shoreline, as well as improve resiliency in flood prone regions along Lake Ontario.

New Yorkers living and working along the shorelines of Lake Ontario and the St. Lawrence River are still reeling from last year's record flooding that devastated their communities.

Department of Environmental Conservation Commissioner Basil Seggos said, "These 20 regional dredging projects are a critical component of Governor Cuomo's comprehensive plan to protect Lake Ontario and St. Lawrence River shoreline communities from high water. The Governor's REDI experts will continue to identify strategic and nature-based flood mitigation projects and utilize state-of-the-art technology to advance projects that protect harbor navigation channels and the economic activity they support while safeguarding our environment and communities for generations to come."

Office of General Services Commissioner RoAnn Destito said, "As one of the 11 State agency commissioners sent by Governor Cuomo to work with Lake Ontario communities to identify assets at risk from flooding and projects that would mitigate those risks, I am delighted to see our efforts coming to fruition. No one has been pushing harder than the Governor has to get these REDI and dredging projects done."

State agencies, in coordination with the U.S. Army Corps of Engineers, secured engineering services to kick start the eight-county regional dredging project and deliver a project outline that will identify areas to be dredged and include a timeline for implementation. The New York Power Authority is part of the REDI Strike Team on dredging and is providing independent technical review for the dredging projects.

Using a remote-controlled boat equipped with a multi-beam sonar, a bathymetric survey was completed by prime contractor Ramboll Group's sub-consultant Prudent Engineering, LLP, a New York State-certified minority-owned business headquartered in East Syracuse, to give the State a picture of what the bottom of Port Bay and Blind Sodus Bay look like. The survey is helping to determine how much dredging is required to reach the desired depth for the navigation channels. This type of survey, along with knowledge of the sediment composition and a disposal location for the dredged sediment is required to implement the Regional Dredging Project at each harbor. Field teams will be conducting additional surveys at harbors throughout the region in spring 2020. 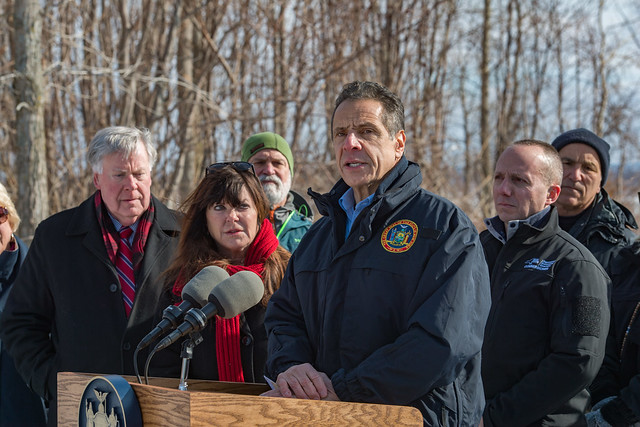 The State's initial support for the Regional Dredging Project is designed to give Lake Ontario and St. Lawrence River counties the time needed to develop long-term operational, maintenance, and funding plans to maintain recreational navigation channels in the future. The harbors along the southern shore of Lake Ontario alone are estimated to generate $94 million in economic activity and support more than 1,350 local jobs.

Each dredging project is targeted to be complete no more than four months from its start date, with dredging expected to commence in:

Initial details about the Regional Dredging Project in Cayuga, Jefferson, Monroe, Niagara, Orleans, Oswego, St. Lawrence, and Wayne counties, as well as the regional benefit to all of these counties is available here.