Governor Andrew M. Cuomo today announced that the historic $1.5 billion expansion of the Javits Center will be substantially complete by March 2021. The massive project, which will add 1.2 million square feet of total event-related space on Manhattan's West Side, is moving toward an on-time, on-budget completion with the expansion's steel and concrete superstructure finished and installation of the final phase of non-structural steel underway. The Governor joined members of the project team and construction workers to sign one of the last steel beams to be installed at the site. Expanding the Javits Center, the busiest convention center in the United States, furthers Governor Cuomo's efforts to continue New York City's role as a leading tourism, hospitality and business destination. The first event hosted at the newly-expanded convention center will be the joint International Contemporary Furniture Fair and LightFair in May 2021. The combined design-industry events are expected to attract more than 40,000 design professionals to New York City.

"New Yorkers expect action, and the expansion of the Javits Center through the design-build process is delivering results in a safe, streamlined fashion that will generate a new wave of economic activity for the Empire State," Governor Cuomo said. "With so many jobs dependent on large-scale events hosted here, the JavitsCenter has become one of New York's most important economic assets, and this expansion will ensure it remains the nation's busiest convention center for generations to come. As an iconic hub of commerce and culture, it will become one of the most sought-after event venues anywhere in the world."

Boasting state-of-the art equipment and cutting-edge technology, the expanded Javits Center on Manhattan's West Side will feature 50 percent more front-of-house and back-of-house areas, including new exhibit and meeting room spaces, a glass-enclosed rooftop pavilion and a truck marshaling facility that will accelerate event operations and reduce traffic congestion. Thanks to the innovative design-build process and proper planning and coordination, the $1.5 billion project is on-time and on-budget, with substantial completion by March 2021.

The expansion project's steel and concrete superstructure is fully installed, and all concrete and steel work is expected to be finished by March 2020, exactly three years after the project's groundbreaking. In total, 13,940 tons of steel have been fabricated. Upon completion, the expanded Javits Center will feature more than 200,000 square feet of new meeting room and pre-function space, including a 54,000 square-foot special event space — the largest event space of its kind in the Northeast. All of the new exhibition and meeting spaces will be equipped with the latest technology in lighting fixtures, heating and cooling systems and wireless connectivity. Importantly, the newly-expanded Javits Center will feature 500,000 contiguous square feet of event space, which will help the facility attract international business conferences.

Spearheaded by Governor Cuomo and Empire State Development, the project will create up to 6,000 new jobs, generate nearly $400 million in additional annual economic activity and attract more blockbuster events from around the world, including high-impact business conferences, product launches and fundraising galas. The project is part of Governor Cuomo's statewide plan to upgrade critical infrastructure and transportation facilities to spur job creation and economic activity.

New Yorkers expect action, and the expansion of the Javits Center through the design-build process is delivering results in a safe, streamlined fashion that will generate a new wave of economic activity for the Empire State.

Empire State Development Acting Commissioner and President & CEO-Designate Eric Gertler said, "TheJavits Center is one of the strongest supporters of New York's hotel, restaurant, tourism and transportation industries, and this expansion will ensure that this connection remains strong. Thanks to Governor Cuomo's leadership and the innovative design-build process, construction has moved forward at a swift pace — keeping this massive project on-budget and on-time to deliver a real economic boost to the Empire State."

President and CEO of the New York Convention Center Operating Corporation Alan Steel said, "Events in New York City will never be the same, thanks to this unparalleled expansion in the heart of the greatest city in the world. The Javits Center is a unique place where business and cultural leaders from around the world come together to share ideas that move our society forward. With the construction of more than 1 million square feet of new space, this building will reach its true potential as an economic engine for the Empire State while improving the quality of life for our neighbors."

As part of the expansion project, a four-level truck marshaling facility will be built, relocating more than 20,000 event-related trucks off nearby streets annually while reducing area congestion and pollution. The addition of 27 new loading docks also will increase the efficiency of the move-in and move-out periods for events, creating more room on the calendar for additional events. Building on the success of the convention center's 6.75-acre green roof, a one-acre rooftop farm, the largest of its kind in Manhattan, will be constructed, and up to 40,000 pounds of produce will be grown annually and incorporated into meals served at the venue. Upon completion, the project is expected to be certified LEED Silver by the U.S Green Building Council, the same certification as the existing building.

A joint venture of Lendlease and Turner is leading the construction of the expansion project with design services provided by tvsdesign. At the height of project activity, more than 3,000 construction workers will be working on the construction site at the north end of the campus. Major highlights of the construction process so far include:

One of the keys to the success of the massive expansion project is ensuring the Javits Center remains open for business at all times during construction and day-to-day operations are not negatively impacted. Enabling event-related operations to continue uninterrupted is a testament to the close collaboration among state officials, architects, contractors, convention center employees and event producers. Lehrer Cumming and AECOM/Tishman Construction are serving as a project advisor and consultant to the New York Convention Center Development Corporation, a subsidiary of Empire State Development that is overseeing the project. The development of a new transformer building, led by AECOM/Tishman Construction, also continues. This three-story structure is currently powering the existing facility and will power the expanded convention center upon completion. 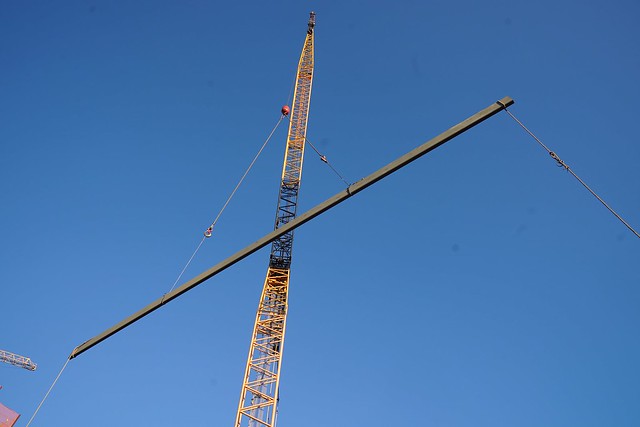 Manhattan Borough President Gale A. Brewer said, "Today's announcement marks yet another milestone for the evolution of our borough's West Side, providing much-needed event and community space and driving the city's economy. I applaud Governor Cuomo for his leadership in bringing this project over the finish line and ensuring New York continues to lead."

Senator Brad Hoylman said, "More than 2 million people from around the globe visit the Javits Center each year, bringing exciting programs and economic activity to Manhattan's West Side. Renovations to the JavitsCenter will create up to 6,000 new jobs and ensure this space is a vibrant part of New York City for decades to come, thanks to the leadership of Governor Cuomo, Empire State Development Acting Commissioner Gertler and Javits Center President & CEO Alan Steel. I'm looking forward to our city welcoming thousands of guests to the newly-renovated Javits Center in 2021."

New York State AFL-CIO President Mario Cilento said, "Today's announcement is just another example of Governor Cuomo's leadership in encouraging state-of-the-art development and growth throughout the state. This project has and will continue to provide hundreds of New York's hard-working men and women with good-paying jobs and will continue the transformation of Manhattan's West Side."

Building & Construction Trades Council of Greater NY President Gary LaBarbera said, "Thanks to Governor Cuomo, this innovative project has and will continue to support solid union jobs for New York's workers and continue to bring much-needed community space to the West Side. The Building and Construction Trades Council of Greater New York looks forward to seeing the expansion of the Javits Center through its completion."

Executive Vice President of Emerald Expositions, which owns and operates the International Contemporary Furniture Fair, Gannon Brousseau said, "Expanding the Javits Center in the heart of New York City will make it one of the most desirable venues in the country, and we applaud Governor Cuomo and his team for their bold vision. The new spaces will allow ICFF to diversify its offerings and serve as a truly multi-discipline design resource center for North America."

Lightfair Show Director Dan Darby said, "The Javits Center is the heart of the events industry in New York, and thanks to Governor Cuomo's leadership, its unprecedented expansion will allow our industry to grow in new and exciting ways. We look forward to using the center's updated spaces and amenities to present an engaging and inspirational LightFair experience for all of our attendees."

About the Javits Center

Known as the "Marketplace for the World," the Javits Center was designed by I.M. Pei & Partners and opened in 1986. The iconic facility has since become New York City's primary venue for large conventions, trade shows and special events and serves as home to many of the world's top 250 trade shows, hosting millions of visitors a year. These large-scale events generate more than $2 billion in annual economic activity for New York City and New York State, supporting as many as 18,000 jobs in and around the facility. Located on 11th Avenue between West 34th and West 40th Sts. in Manhattan, the Javits Center has 760,000 square feet of exhibition space, 102 meeting rooms and four banquet halls, as well as a range of technology services, including WiFi access. For more information, visit www.javitscenter.com.