Governor Andrew M. Cuomo today announced a $1.2 million state challenge grant to construct a building to house the nearly century-old DeAngelis Carousel at Canalside in Buffalo. This year, Canalside welcomed 1.5 million visitors -- six times the population of Buffalo and ten times more visitors than it saw in 2010. On the heels of that record-breaking achievement, the installation of the vintage carousel complements the rapid transformation of Buffalo's waterfront. The new building will enclose the historic, custom-designed wooden carousel to allow for year-round access, provide space for events and activities, and showcase Buffalo’s rich history in carousel making and its vibrant waterfront.

Highlighting the success of Outer Harbor, the Governor also toured the latest enhancements to the award-winning Buffalo Harbor State Park, surveying the completion of the new pedestrian promenade and the next phase of improvements already underway.

"Buffalo's thriving waterfront is a driving force behind Western New York's resurgence, and the addition of this historic carousel will attract even more visitors and revenue to the region," Governor Cuomo said. "This new attraction showcases Western New York's rich history of carousel making as well as the region's growing leadership in sustainability. With over 1.5 million visitors at Canalside this year alone, the revitalized Buffalo waterfront is bolstering economic growth and helping us build a better, stronger Buffalo for generations to come."

The vintage menagerie, park-style carousel was manufactured in 1924 by Spillman Engineering in North Tonawanda. Buffalo Heritage Carousel acquired the DeAngelis Carousel to provide family oriented recreation on Buffalo’s waterfront and to celebrate Western New York's industrial heritage and legacy of leadership in renewable energy. Buffalo Heritage Carousel will continue to raise up to $2.8 million in funds to both power and preserve the carousel year-round at Canalside. The carousel is predicted to begin operations in the next two years and the price of admission will be set at a maximum of $1.

The carousel complements the success of Buffalo's waterfront and recent developments, including the City of Buffalo’s first state park, Buffalo Harbor State Park. The $3.76 million project to improve the breakwall and southern revetment is part of the $15 million in improvements provided through the Governor‘s NY Parks 2020 initiative that is completely reinvigorating the Buffalo Harbor waterfront. The rehabilitated breakwall is stabilized and provides new recreational access with paved walking and bike paths, shaded seating areas, the introduction of a fishing platform and enhanced lighting for nighttime safety and enjoyment. The next phase of improvements at Buffalo Harbor State Park is underway, which includes a public boat launch, expansion of utilities, a redesigned vehicular roadway and parking to improve traffic flow for park users and boaters.

State Parks Commissioner Rose Harvey said, "The revitalization of Buffalo Harbor State Park has rejuvenated the waterfront and now provides the community with a proper recreational and family friendly resource. Parks and green spaces have a tremendous, unparalleled power to enhance communities, and I thank Governor Cuomo for championing this new park for the wonderful city of Buffalo and for all the exciting changes yet to come.”

Laurie Hauer-LaDuca, President of Buffalo Heritage Carousel, Inc., said, "It is so exciting that the carousel will be ready for riding within two years and Governor Cuomo has today taken our project a major step forward with his outstanding support of our carousel project. It is the BHC mission to make history come to life now as well for future generations. Grandparents, parents and children can make new memories together while riding the Carousel."

Erie Canal Harbor Development Corporation Chairman Robert Gioia said, "With this funding we are headed in the right direction so that within the next two years families will have even more of a reason to visit and stay longer at Canalside, taking a ride on the carousel and spending time at the future Explore & More Children’s Museum." 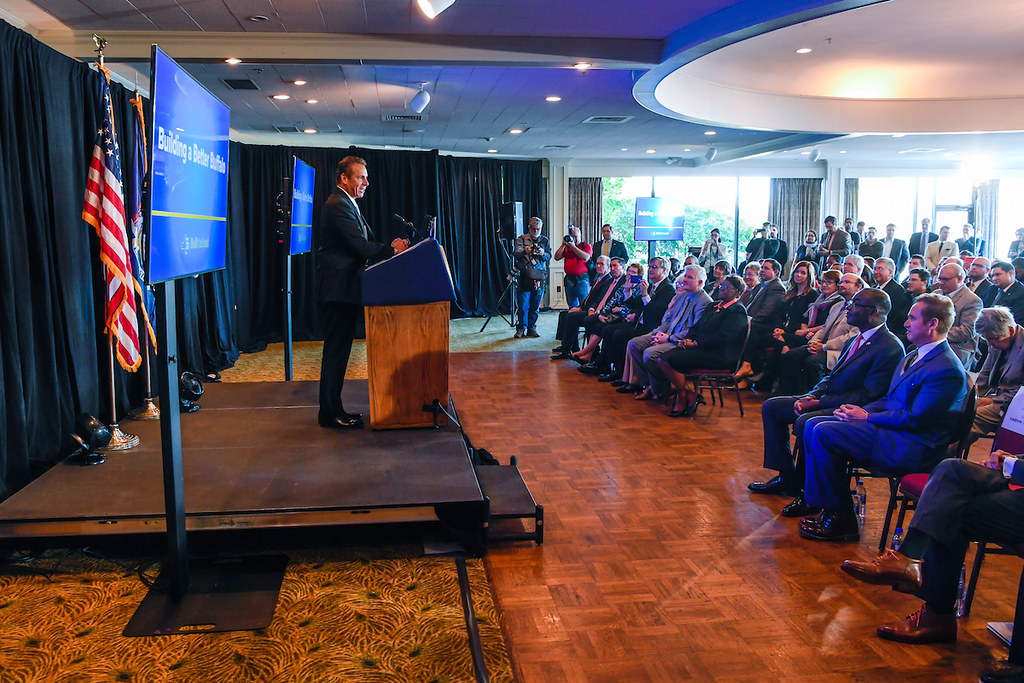 Congressman Brian Higgins said, "The addition of the City of Buffalo's first state park is a game changer for Buffalo's outer harbor and continued investments by the State in amenities, the breakwall and parking areas build on the progress making our waterfront a prime destination for anglers, bicyclists, families and boaters. Thanks to the Governor’s commitment to enhancing and expanding Western New York’s assets, we will continue to attract millions of visitors and strengthen economic growth for generations to come.”

Senator Tim Kennedy said, “It is amazing to see Buffalo's waterfront transformation that has taken hold of this community since 2011, and with the addition of the historic DeAngelis Carousel, there is even more reason to visit the area. Thanks to the continued support of Governor Cuomo, we have seen scores of visitors to Western New York, in addition to new businesses popping up across our communities. This is exactly the kind of positive economic activity we like to see in our region and we look forward to continued growth thanks to the addition of this historic gem.”

Assemblymember Crystal D. Peoples-Stokes said, "Tourism is driving our regional economy and this funding builds on that momentum. The solar-powered carousel will provide a year-round family destination and another piece of Buffalo’s story that will promote historic tourism. I thank Governor Cuomo and the entire Western New York community for helping bring this historic project to life and bringing the Carousel home for all to enjoy.”

Assemblyman Sean Ryan said, “I worked to secure $600,000 in funding for the carousel because Western New Yorkers deserve to have this beloved attraction back at its original home. The carousel at Canalside will be entertaining, sustainable, and will fortify our growing waterfront economically and culturally. With the announcement of this funding, Governor Cuomo brings us one step closer to seeing this dream become a reality. I look forward to the grand opening of this exciting new feature.“

Mayor Byron Brown said, "Once it returns home to Buffalo, the historic Carousel will bring a unique entertainment opportunity to city residents and visitors. This funding guarantees that we will have the Buffalo Heritage Carousel up and running on our waterfront. This attraction will bring thousands of new visitors to downtown Buffalo and Canalside. Earlier this year, I authorized the sale of a city owned parcel at Canalside to Empire State Development to ensure that the historic Carousel would become a major attraction on our waterfront. I'm pleased to see this project move forward and I thank Governor Cuomo for his continued dedication to the fortification of the Buffalo economy."

Buffalo Heritage Carousel, the City of Buffalo and Erie Canal Harbor Development Corporation announced in June that a memorandum of understanding had been reached between these three entities to provide a future location for the carousel at Canalside. In accordance with this MOU, Erie Canal Harbor Development Corporation purchased property to provide a place to construct and operate the carousel project.

Buffalo Heritage Carousel, Inc. was formed as a 501c3 non-profit organization to bring a solar-powered carousel to our revitalized urban waterfront, one that celebrates the history of carousel manufacturing in Western New York, the Erie Canal and the legacy of leadership in the use of renewable energy. The mission of Buffalo Heritage Carousel, Inc. is to provide entertainment and education about renewable energy technologies in a way that stimulates life-long learning about our environment and the responsible use of our natural resources.