Governor Andrew M. Cuomo today announced $10 million for two signature features of what will be the Ralph C. Wilson Jr. Centennial Park in Buffalo. New York State will help fund a pedestrian bridge to replace the current Hudson Street Bridge, which will create access to the lake's edge in the park, as well as a new lagoon that boosts tourism and resiliency efforts. The Ralph C. Wilson, Jr. Centennial Park will be located at the current site of LaSalle Park, the City of Buffalo's largest waterfront park.  For years, the City of Buffalo and the community have envisioned something greater for LaSalle Park. With the support of New York State and the Ralph C. Wilson, Jr, Foundation, which previously committed $50 million toward the park, the park's potential will come to fruition.

"The progress in Buffalo and in Western New York is undeniable. That success should be shared with everyone, and that's what the reimagining of LaSalle Park is all about," Governor Cuomo said. "Our vision from day one has been about democratizing Buffalo's waterfront, and by investing in this new bridge and in this new lagoon, we can help ensure communities that for too long have been blocked from the waterfront get to experience it and all the benefits of the region's renaissance."

"Today we mark another milestone in the ongoing transformation of Buffalo's waterfront," said Lieutenant Governor Kathy Hochul. "As an active user of LaSalle Park, I know how important this community asset is, and I look forward to the future Ralph C. Wilson, Jr. Centennial Park. With this significant funding commitment and our partners at the Wilson Foundation and the City of Buffalo, we are further enhancing an amazing project that will help to connect people to the water."

Ralph C. Wilson, Jr. Foundation President and CEO David Egner said, "LaSalle Park is a beloved neighborhood park that is used by so many for a walk or a run, youth sports, community events or simply to connect with nature. The community vision for LaSalle Park highlighted the importance of safe access to the Park and the Buffalo Waterfront for everyone.  The Foundation is proud to be able to commit an additional $5 million to support a new pedestrian gateway that will provide a critical neighborhood connection across the I-190, create a safe and inviting entrance to the park and views of Lake Erie, and be an iconic symbol of the momentum across the City of Buffalo."

The need for a new pedestrian bridge came out of the Imagine LaSalle community engagement process as a way to provide safe access to the park. Currently, residents of the Lower West Side either cross the existing pedestrian bridge, which has dangerous sightlines and is not ADA accessible; enter at the Porter Avenue entrance; use the multi-use Riverwalk trail to the south; or utilize an unofficial, dangerous crossing point. The current budgetary estimate for the pedestrian bridge is $15 to $17 million for design and construction. New York State will commit $7.5 million, the Ralph C. Wilson announced a match commitment of $5 million, and the City of Buffalo will commit $3 million toward the bridge.  New York State's intent is to provide these funds to support the design and construction funds over and above the cost of a standard replacement bridge, which will provide the opportunity to make this a signature structure in the City.

The progress in Buffalo and in Western New York is undeniable. That success should be shared with everyone, and that's what the reimagining of LaSalle Park is all about.

The lagoon element in the Ralph C. Wilson, Jr. Centennial Park aims to create natural habitat, capture water through green infrastructure and generate shoreline resiliency for climate change. New York State will commit $2.5 million toward the lagoon. Buffalo Niagara Waterkeeper has been leading efforts to design and build the lagoon while coordinating with technical stakeholders, including the City of Buffalo, U.S. Army Corps of Engineers and THE New York State Department of Environmental Conservation. The design will be adjusted based upon continued input from technical stakeholders and overall funding available.

In fall 2018, Mary Wilson - the widow of the late Buffalo Bills pro football franchise founder and longtime owner - and the foundation named after her husband announced a $100 million gift to Western New York to improve parks and trail ways. Half of that money will be invested in the redesign of LaSalle Park into the Ralph C. Wilson, Jr. Centennial Park. 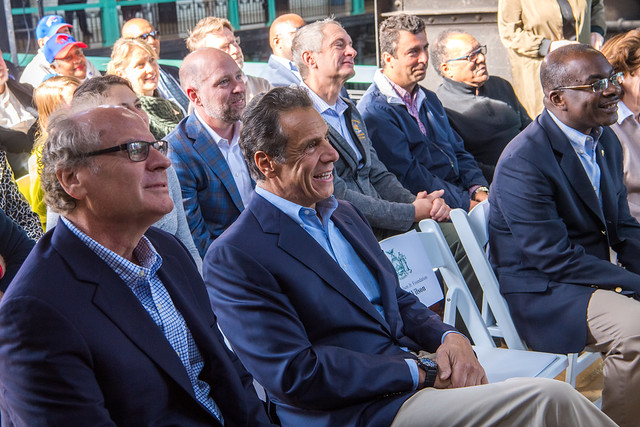 Mayor Byron W. Brown said, "These state funds to the Ralph C. Wilson, Jr. Centennial Park builds on the Governor's extraordinary commitment to Buffalo's waterfront and the people of this community. The city's additional $3 million commitment for a new pedestrian bridge into the park guarantees it will be a signature element, creating a safe, inviting gateway into Buffalo's largest waterfront park."

Assembly Member Sean Ryan said, "For too long the residents of the West Side of Buffalo were not properly linked to LaSalle Park. This infrastructure investment will allow people to access LaSalle as it transitions into a state-of-the-art park."