Governor Andrew M. Cuomo today announced a major public-private partnership between the State of New York and Cree, Inc., the global leader in silicon carbide technology, to invest approximately $1 billion over six years to construct and equip a new, state-of-the-art, highly-automated world's-first, 200mm silicon carbide wafer fabrication facility. This investment also includes a $30 million research and development commitment by Cree, with plans to create over 600 full-time highly-skilled technician and engineering positions at the Marcy Nanocenter on the SUNY Polytechnic Institute campus near Utica.

"This partnership is vital to strengthening the research and scientific assets that New York State needs today to attract the high-tech industries and jobs of tomorrow," Governor Cuomo said. "This is a crucial step in cultivating the advanced manufacturing infrastructure of New York State, growing the upstate economy and transforming the future of the Mohawk Valley.

"This public-private partnership is advancing innovative research and development at the Marcy Nanocenter," said Lieutenant Governor Kathy Hochul. "The nation-leading facility will continue to grow the high-tech industry in the Mohawk Valley and create hundreds of jobs at the SUNY Polytechnic Institute. The project includes a job training program to ensure students are trained with the skills they need to meet businesses' needs in the future. We are committed to growing the advanced manufacturing industry to further establish New York as an innovation hub and strengthen the economy."

Gregg Lowe, CEO of Cree, said, "This public-private partnership will not only bring hundreds of jobs and investment to New York, but it will also strengthen Cree's position overall, including in North Carolina, and ensure our standing as the global leader in silicon carbide technology. We want to thank Governor Andrew Cuomo and Empire State Development for providing Cree with this opportunity and welcoming us to New York. This state-of-the-art, automotive-qualified wafer fabrication facility builds on our 30-year heritage of commercializing disruptive technologies that help our customers deliver next-generation applications. We look forward to connecting our North Carolina and New York innovation hubs to driving the accelerated adoption of silicon carbide."

Cree has committed to create over 600 new Cree jobs within eight years and provide internships and research opportunities for State University of New York students. The efforts help to develop an advanced manufacturing-oriented workforce development initiative across the SUNY system to prepare a 21st century workforce for the long-term, high-quality employment and advancement opportunities the new facility will present. SUNY has also committed to match up to $5 million in semiconductor-related research funding from Cree for the SUNY system.

New York State will provide $500 million in performance-based, capital grants from Empire State Development to reimburse a portion of Cree's costs of fitting out the new facility and acquiring and installing machinery and equipment, as well as $1 million in Excelsior Jobs tax credits.

In addition to the more than 600 direct jobs to be created within eight years, the project is estimated to generate approximately 570 indirect jobs and over $4.3 billion in total statewide economic impact over the next 20 years. Silicon carbide is at the core of helping to power high-growth markets, such as the move from internal combustion engines to electric vehicles (EVs) and the rollout of ultrafast 5G networks. Silicon carbide-based power electronic devices offer significant efficiency, reliability and performance. For applications like EVs, this enables greater system efficiencies that result in electric cars with longer range and faster charging, while reducing cost, lowering weight and conserving space.

Mohawk Valley EDGE, which has been instrumental in transforming the Marcy Nanocenter property into a "shovel-ready" site that meets the highest semiconductor standards while also aggressively marketing the site, will sublease the parcel to Cree under a 49-year lease. Construction of the fab will be led by Cree and monitored by Empire State Development, Mohawk Valley EDGE and the New York Center for Research, Economic Advancement, Technology, Engineering and Science (NY CREATES). In total, the new facilities in Marcy are expected to cover approximately 500,000 square feet, up to 135,000 square feet of cleanroom space and other support facilities.

The addition of Cree to the Marcy Nanocenter is a result of the PEMC, a public-private partnership along the upstate corridor to continue the development of smaller, faster and more efficient silicon carbide materials vital to the continued growth of the semiconductor industry. Upon completion in 2022, the new facility in Marcy will substantially increase the company's silicon carbide wafer fabrication capacity, allowing for a wide range of semiconductor solutions that will enable the dramatic technology shifts underway within the automotive and electric vehicle, communications infrastructure and industrial markets.

The entrance of Cree into upstate New York will result in significant local and regional economic benefits, creating hundreds of new jobs, a Cree employee payroll that is expected to exceed $46 million per year, and an estimated $3.4 billion dollars in Mohawk Valley regional economic impact. The project builds upon the growing semiconductor industry that has been a pillar of upstate economic development stemming from IBM, GLOBALFOUNDRIES, Applied Materials, Tokyo Electron, Danfoss, and others. A 2018 report by Georgetown University estimated that more than 60,000 total direct, indirect, induced, and construction jobs upstate are attributable to nanotechnology, driven in large part by the semiconductor industry

This is a crucial step in cultivating the advanced manufacturing infrastructure of New York State, growing the upstate economy and transforming the future of the Mohawk Valley.

Empire State Development Acting Commissioner and President and CEO-designate Eric J. Gertler said, "When Cree chose the Mohawk Valley for its new facility, it was proof positive that once again, upstate New York is a great place to do business. Today's announcement demonstrates our continued commitment to stimulating economic development and job creation while promoting groundbreaking research and development in high-tech manufacturing."

SUNY Chancellor Kristina Johnson said, "New York State continues to be a hub for research, and today's announcement signals more opportunities for our faculty and students to participate in semiconductor-related research, and create internships and jobs in this area. We applaud the Governor for once again delivering on his commitment to building partnerships between higher education and employers to deliver careers for the local community."

SUNY Polytechnic Institute Interim President Dr. Grace Wang said, "SUNY Poly is committed to providing a top-tier education, enabling our students to thrive in the 21st century economy in the Mohawk Valley, across New York State, and beyond. Our commitment dovetails perfectly with today's announcement, and SUNY Poly is proud to contribute to the continuing growth of future research and innovation capacity in New York State. We offer our congratulations to Governor Andrew Cuomo, Empire State Development, Mohawk Valley EDGE, and Cree for this wonderful effort, in addition to our gratitude to the community for their steadfast support of the Marcy Nanocenter."

Representative Anthony Brindisi said, "The big winners today are the people that call our area home. Cree's decision to expand its manufacturing facility in Marcy will ensure we continue to be at the forefront of high-tech manufacturing and provide more good paying jobs for our residents. I want to thank Governor Cuomo for keeping his commitment to our community and for working to make the Mohawk Valley an even better place to live."

Senator Joseph A. Griffo said, "I appreciate the efforts of all the local, county and state elected officials, as well as Mohawk Valley EDGE and Empire State Development, who worked together to make this project happen. Today's announcement is a significant step in our efforts to create jobs, grow the local economy and generate future economic opportunity and development in the Mohawk Valley and Upstate New York. While I remain cognizant of the obstacles, roadblocks and issues that we encountered in getting to this point, I am hopeful that this latest development will contribute to economic growth throughout the region and help to move it forward."

Assembly Member Maryann Buttenschon said, "I couldn't be more pleased that Cree, Inc is making its home in the Mohawk Valley. This project will result in great paying jobs and continue to grow the economy of the region, revolutionize the silicon carbide industry and place New York State at the forefront of high-tech manufacturing."

Oneida County Executive Anthony J. Picente Jr. said, "Today is the day that our unwavering commitment to bringing a chip fab to the Marcy Nanosite has been rewarded. Where others have doubted, we remained dedicated to the development of our investment, and the years of perseverance have resulted in a partnership with a global leader in silicon carbide wafer technology. I want to welcome Cree to Oneida County and thank them for this monumental investment in our community that will result in more than 600 well-paying jobs. This transformational announcement could not have been possible without the ironclad commitment Governor Cuomo made to our region by keeping the funding in place that made it a reality, nor without the diligence of our partners at Mohawk Valley EDGE who never gave up in their pursuit."

Utica Mayor Robert Palmieri said, "The City of Utica is excited for Cree Inc. and the opportunities it presents for the Greater Utica Region. This $1 billion investment says a lot about Cree and its belief in our people and the partnerships we've worked hard to create. The future of Utica and the region is bright, our partnerships are stronger than ever and the generational change we've always hoped for is here."

Rome Mayor Jacqueline Izzo said, "The addition of Cree Inc. to the Marcy Nanocenter is continued proof that hard work and determination, and the knowledge that the Mohawk Valley is a great place to live and work is paying off. This project will have so many positive impacts not only on Marcy and Utica, but on Rome and the region, and supports the long term investments we continue to make in the Mohawk Valley."

Town of Marcy Supervisor Brian Scala said, "On behalf of the Town of Marcy we applaud Cree's decision to expand its semiconductor operations at Marcy Nanocenter and look forward to having Marcy be the epicenter of the power electronics revolution."

Steve DiMeo, President, Mohawk Valley EDGE, said, "CREE's decision to locate its state-of-the-art 200 mm SiC semiconductor facility at Marcy Nanocenter and its partnership with SUNY Poly's Power Electronics Manufacturing Consortium is a game changing event for the Mohawk Valley Region. This partnership positions the Mohawk Valley as a hub in next generation power electronics and RF Technologies. The company's Wolfspeed Division is a leader in developing semiconductor solutions that is leading the way for the automotive industry's $350 billion commitment in electric vehicles, enables the rollout of the 5G Communications Infrastructure, and CREE's Wolfspeed division provides technologies integral for the renewable energy, aerospace and defense, and industrial markets. Today's announcement reaffirms Governor Cuomo's commitment in supporting this region's economic development strategy that targeted development of the Marcy Nanocenter site as a critical underpinning in the region's economic development." 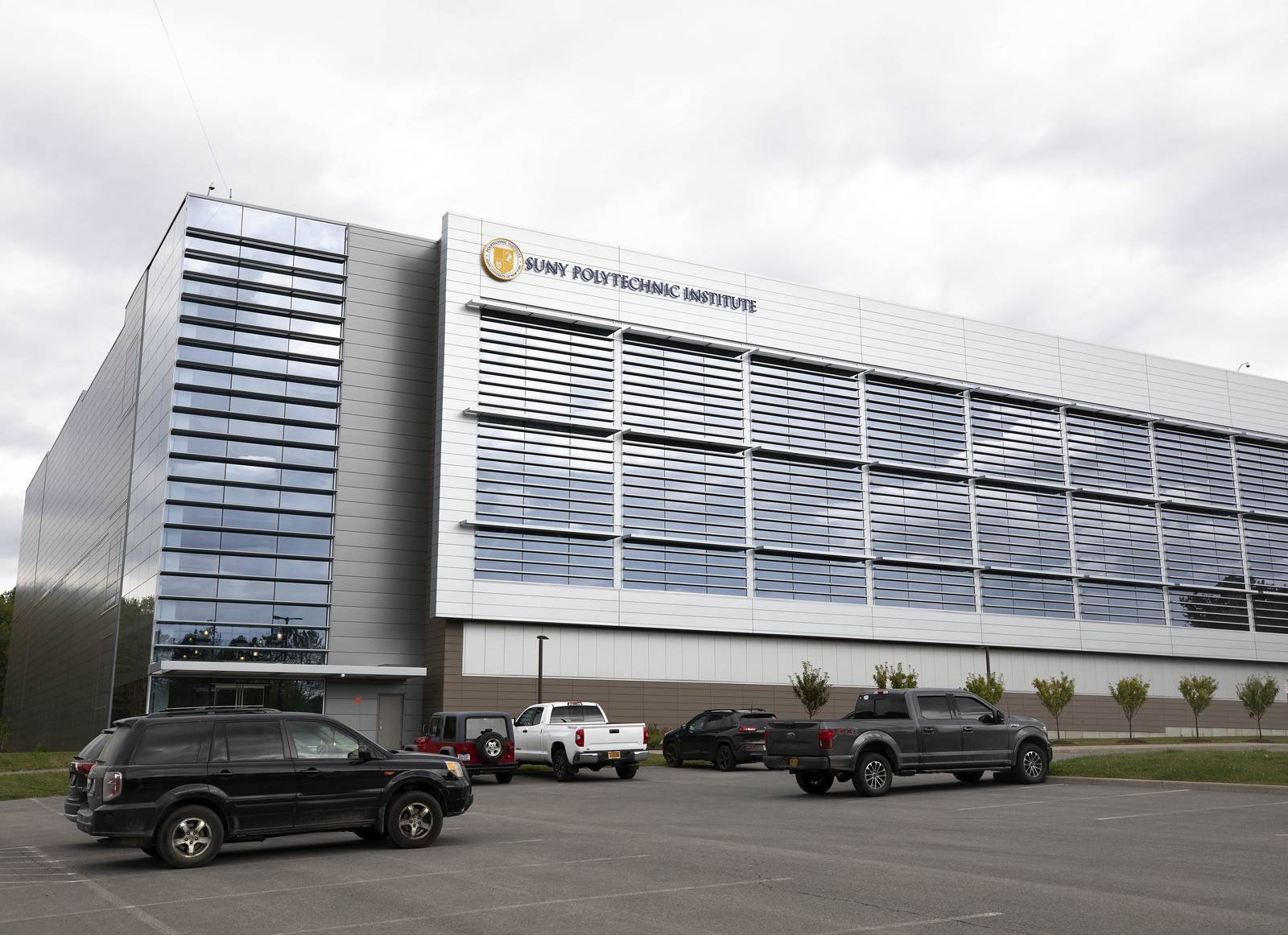