Lt. Governor Hochul Unveils Patch at Event Joined by Girl Scouts Leaders from Across New York at National Museum of the American Indian

Governor Andrew Cuomo and Lieutenant Governor Kathy Hochul today announced a new Girl Scouts patch celebrating the centennial of women's suffrage in New York. Women in New York gained the right to vote in 1917, three years before the 19th amendment granted suffrage to women across the United States. The patch program is a partnership between Girl Scouts councils and the New York State Women's Suffrage Commission, chaired by Lieutenant Governor Kathy Hochul. All seven Girl Scouts councils in New York will participate in the patch program, giving girls across the state an engaging way to learn about the history of the women’s movement in New York and envision how they can lead for justice. 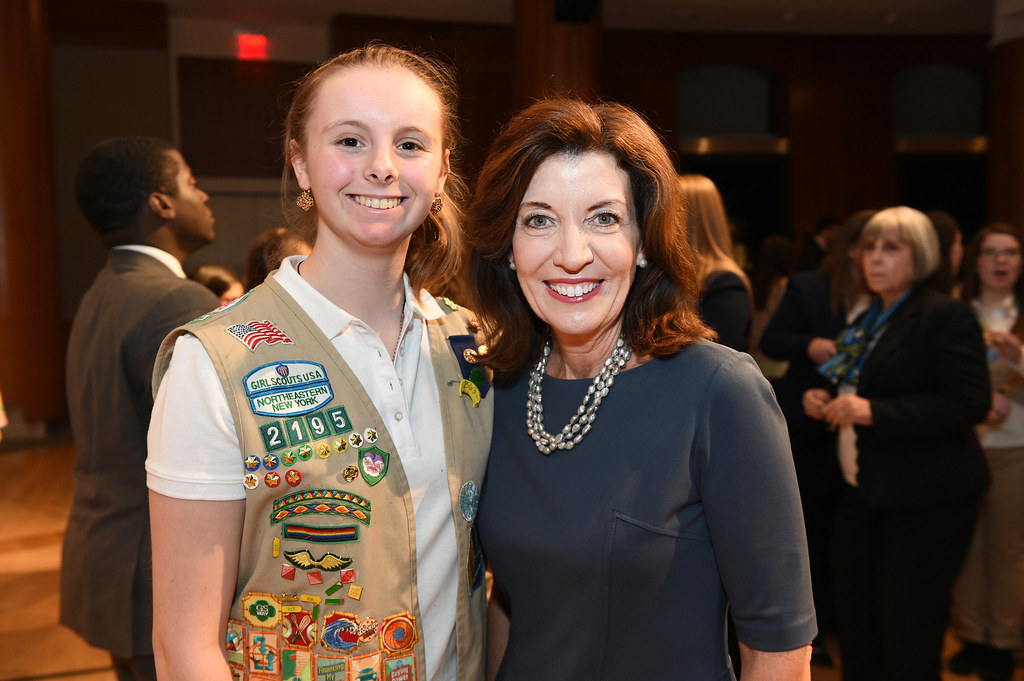 "From the birth of the women’s suffrage movement with the Seneca Falls Convention in 1848 to the strongest in-the-nation paid family leave and the Women’s Equality Act, New York has remained on the forefront of the battle for women’s rights and gender equality," Governor Cuomo said. "This new patch is a great opportunity for girls across New York to learn about the importance of the fight for women’s suffrage as they become the next generation to lead the movement for equality and justice for all."

Lieutenant Governor Hochul was joined by representatives from the seven New York Girl Scouts councils and Girl Scouts from across the state at a ceremony celebrating the patch program, held at the National Museum of the American Indian in New York City.

"This year marks a great opportunity to celebrate women’s accomplishments and contributions to our history, including fighting for the right to vote," Lieutenant Governor Kathy Hochul said. "The women’s suffrage Girl Scouts Patch is the next step in the Girl Scouts’ history of advocacy and empowerment on behalf of girls and women, and I look forward to joining with these girls throughout the coming year to learn and share about women’s equality. The patch is a key part of the Women's Suffrage Commission’s work to inspire the next generation of young women who want to rise up and achieve great things themselves."

The patch program, developed by the Girl Scouts of Northeastern New York, asks New York Girl Scouts to think about what justice means to them, how the Women’s Rights Movement is a part of their lives today, and encourages them to make advocacy a part of their lives. They must learn the names of key suffragette leaders and the definition of civil disobedience, visit (virtually or in person) key sites in the women’s rights movement, create a suffrage banner, and play games popular for girls 100 years ago, among other things. View the patch here and the patch program here.

The seven New York Girl Scouts Councils participating in the patch program are:

The Women's Suffrage Commission, chaired by Lieutenant Governor Kathy Hochul, is organizing statewide programs to commemorate women's suffrage between 2017, 100 years from when women won the right to vote in New York State, and 2020, which will be a century after the 19th Amendment was ratified. The Commission’s programs will celebrate the accomplishment of women’s suffrage and the central role of New Yorkers and New York State in this milestone, while also helping shape the future to ensure a more just and equitable society for all. To get involved, visit www.ny.gov/suffrage.

Mary Buszuwski, Chief Executive Officer, Girl Scouts of Northeastern New York, said, “We here at Girl Scouts of Northeastern New York are pleased to work in collaboration with Lt. Governor Kathy Hochul, the NYS Women’s Suffrage Commission, and our sister Girl Scout Councils in New York State on this patch program in recognition of the Centennial of Women’s Suffrage in New York. The civics component of Girls Scouting is critical in helping girls understand the importance of voting and the electoral process. Not just here, but around the world.  Democracy is not a spectator sport.  Our hope is that this patch program will encourage all of our girls to have a better understanding of the significance of participating in our democratic system, from exercising their right to vote, to running for office, to serving their constituents with the same passion for service and values that they learned as a Girl Scout.”

Barbara Murphy Warrington, CEO Girl Scouts of Greater New York, said, “At the Girl Scouts of Greater New York, we believe in the power of every girl to make her community, her state, and the world a better place. Our new women's suffrage patch program builds on our advocacy education efforts by encouraging our nearly 30,000 girls to learn about the importance of civic action and become advocates for their own causes.   We are proud to work with the Governor Andrew Cuomo, Lieutenant Governor Kathy Hochul, the Women’s Suffrage Commission, and our sister Girl Scouts across New York State to educate girls about the importance of voting, civic engagement and the history of women’s equality.”

Donna Ceravolo, Executive Officer and CEO of the Girl Scouts of Nassau County, said, “We are thrilled to have our Girl Scouts be a part of this special centennial anniversary of the women’s suffrage movement. It’s important for our girls to know the historic accomplishments of women over the last century and this patch program will help girls across the New York State learn all about the fight for the vote. Our founder, Juliette Gordon-Low, has instilled a progressive spirit in this organization that has been carried on throughout all of our initiatives. Today, it’s women such as Lt. Governor Kathy Hochul, who will help further inspire this next generation of young women to continue to pave the way for equality. We thank her for her leadership and we look forward to participating in this exciting event."

Judith Cranston, CEO of Girl Scouts of Western New York, said, “New York has long been a leader in the women’s rights movements, and I am thrilled to work with the New York State Women’s Suffrage Commission to celebrate the 100th anniversary of women winning the right to vote. The new Girl Scout suffrage patch will ensure our scouts learn about women’s history in New York, and follow in the footsteps of women like Susan B. Anthony to become future leaders in the process.”

Yvonne Grant, President and CEO of Girl Scouts of Suffolk County, said, “Girl Scouts began in 1912 at the height of the women’s suffrage movement. The young women in our council are delighted to participate on this momentous occasion as we celebrate the centennial of women’s right to vote in New York State.”

Julie Dale, CEO of Girl Scouts of NYPENN Pathways, Inc., said, “The first convention on women’s rights was held in 1848 in Seneca Falls, an historic town in our council. These pioneering women were audacious and remind us that all people must be accepted as equal. As modern Girl Scouts, we continue their mission and guide girls to become leaders who have the courage and conviction to stand for what they believe in. It is only fitting that we celebrate these early women who recognized the importance of coming together and shared their voices to win the right to vote.”

Patricia Page, CFO and Acting CEO of The Girl Scouts Heart of the Hudson, said, When New York women won the right to vote 100 years ago today, they changed the national political landscape. Through Girl Scouting, we give girls the independence, confidence, and skills they need to empower themselves and others, so that they too can create the change they want to see in the world. We are excited to partner with Lieutenant Governor Kathy Hochul and NYS Women’s Suffrage Commission to further the conversation about women’s suffrage and the history of the role women have played in democracy. We believe this patch will inspire the next generation of young women to fight for justice and equality, and to become more civically engaged."