With todays passage, this States administration has delivered four on-time budgets in a row under the same governor and legislative leadership for the first time in more than forty years, not since Gov. Nelson Rockefeller, Assembly Speaker Perry Duryea, and Majority Leader Earl Brydges.

The budget holds spending growth below two percent for the fourth consecutive year, continuing a record of fiscal discipline that has reversed decades where state spending increased at a higher rate than inflation and personal income growth. Along with other targeted investments that will grow the economy and strengthen New Yorks communities, the budget contains $1.5 billion in property tax cuts to aid New Yorks homeowners and encourage local governments to increase efficiencies, as well as a major five percent increase in State education aid.

This budget builds on the States progress over the past three years in order to grow the economy and create new opportunities for New Yorkers and their families, Governor Cuomo said. This budget maintains the fiscal discipline that has characterized the last three years of progress by holding the growth in spending below two percent, while also making broad tax cuts that will help homeowners and businesses thrive. It also contains targeted investments that will transform our schools, ensure safer, cleaner, and fairer communities, and restore the publics trust in government. This budget contains the framework that will allow us to build a new New York, and I commend the members of the Senate and the Assembly who have joined us to continue that progress.

Senate Majority Coalition Co-Leader Dean Skelos said, I am pleased that we are acting today on a bipartisan budget that delivers property tax relief to hardworking families, reduces taxes for businesses so they can create new jobs and gives every student the resources they need to be successful. Our enacted budget includes a new property tax rebate program, a reduction in the Gap Elimination Adjustment for schools, expansion of the EPIC program for seniors, and elimination of the corporate tax for manufacturers. I congratulate Governor Cuomo for achieving comprehensive, bipartisan ethics and election reforms that will increase transparency and restore confidence in government. Working together, we will pass the states 4th consecutive on-time budget, a symbol that state government is functioning and getting results. I thank the Governor for his strong leadership and our partners in the Legislature, Senator Klein and Speaker Silver, for their hard work and commitment to the people of this state.

Senate Majority Coalition Co-Leader Jeffrey D. Klein said, This budget delivers on our promise to provide high-quality, full-time, universal pre-k to tens of thousands of New York City four-year-olds starting this September. I am very proud of the fact that this budget fulfills the Independent Democratic Conferences pledge to make New York more affordable for working families, by expanding prescription drug coverage for seniors, increasing state funding for day care programs, and providing much needed relief to renters and homeowners across our state. By working with all of our colleagues, we can and must continue to make New York more affordable for the families and small businesses who need us most. Our work on campaign finance reform has just begun, and I look forward to passing a more comprehensive system of public financing before the end of this years legislative session. All of us agree that we must do more to restore the integrity and fairness of our electoral process.

Assembly Speaker Sheldon Silver said, Throughout the negotiations leading to this budget agreement, the Assembly Majority put working families first and endeavored to address the myriad challenges facing them today. We are proud that the 2014-15 enacted state budget makes a strong commitment to the education of our children through dramatic investments in school aid and universal pre-K, and much-needed increases in TAP, community college base-aid, and higher education opportunity programs all historic Assembly initiatives and priorities. Equally important, this budget keeps our promise to provide working families with tax relief, to create jobs in every region of the state, to alleviate the child-care crisis, and to honor our longstanding obligation to provide affordable housing, to protect public health and to care for our most vulnerable citizens. In addition, this budget puts New York on the path to fair elections, a goal we have pursued for nearly 30 years.

Commitment to Education: Meeting the education needs of New Yorks students gives them a path to prosperity and the tools to become productive members of society, while also providing a more secure economic future for the state. The Budget agreement includes a series of actions that build on the progress of the last three years to ensure all of New Yorks students receive a quality education.

The Budget includes further reforms to ensure New Yorkers have confidence that their elected officials are serving them honestly and with transparency.

The Budget increases the Environmental Protection Fund (EPF), maintains State funding for core environmental, parks and agricultural programs, expands outdoor recreational opportunities, and provides a new round of New York Works capital funding for environmental facilities. State agency and public authority funding will continue to make New York a leader in the clean tech economy, reduce the emissions that contribute to climate change, and allow the transformation of our transmission system to a distributed smart grid network.

The Budget supports continued progress toward making New York more prepared for and resilient to future emergencies. Equally important, the Budget reflects an approach to public safety that is tough, smart and fair. These priorities, taken together, will help ensure the safety of all New Yorkers in the event of an emergency.

The Budget provides funding for core supportive services for needy populations, provides for the transformation of our health care system, increases funding for child care subsidies that allow low-income individuals to seek or maintain employment, expands the availability of affordable housing across the State and makes further investment in the Pay for Success program. 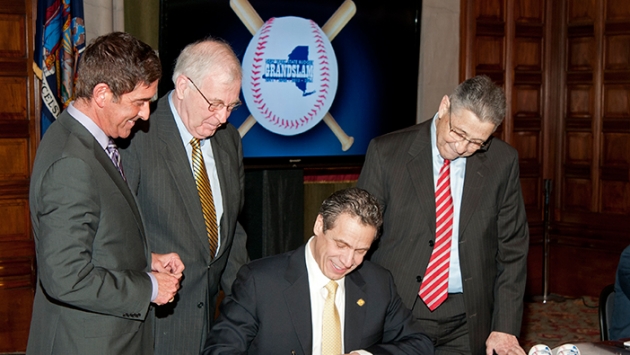