States to Hold Summit with Key Law Enforcement, State Health and Policy Officials in October to Develop Guidelines and Principles for Vaping and Legalization of Cannabis

Governor Andrew M. Cuomo and Governor Ned Lamont today announced a strategic partnership between New York and Connecticut to develop a uniform regional approach to policies on e-cigarettes and legal cannabis. On October 17, officials from law enforcement, state health officials and policy makers representing both states will hold a summit to develop guidelines and principles that will benefit the two states' vaping oversight and cannabis legalization and help keep New York and Connecticut residents safe.

"We are serious in this state about legalizing recreational use of marijuana, but it has to be done right. At the same time the federal government has refused to step up during this vaping crisis, so it is up to the states to develop policies that will help keep people safe," Governor Cuomo said. "Policies governing vaping products and recreational marijuana will require regional symmetry because it makes little sense for one state to do something if a neighboring state has a totally different policy - without coordination, you end up incentivizing people to drive over the border to buy a different or cheaper product. I thank Governor Lamont for working together on this issue and look forward to advancing this conversation during the upcoming summit."

Governor Ned Lamont said, "It was wonderful to have Gov. Andrew Cuomo in Connecticut to discuss issues that are important to both of our states. We not only share borders, but we share economic interests, public health priorities, and a joint understanding that the more states work together on these kinds of issues, the better the policy results will be for our residents. Every day thousands of New Yorkers travel over the border to work in Connecticut, and thousands of Connecticut commuters rely on New York for their livelihood. To that end, it's common sense for our states to be aligned in numerous policy areas. Governor Cuomo and I have the chance to be leaders together on these issues of public importance, and that's exactly what we're going to do."

Vaping regulation and cannabis legalization will be heavily influenced by the geographical proximity and traffic flow between New York and Connecticut. With consumers of vaping and cannabis products expected to be transferring products across state lines, next month's summit will examine a number of factors that will influence state policies on the products.

Policies governing vaping products and recreational marijuana will require regional symmetry because it makes little sense for one state to do something if a neighboring state has a totally different policy.

For recreational cannabis, these include but are not limited to: taxation, product safety and testing, product availability and advertising, roadside testing, banking and financial services, and necessary social justice and equity considerations in the legalization framework.

In July, Governor Cuomo signed legislation further decriminalizing marijuana use in New York State. New York's existing marijuana laws disproportionately affect African American and Latino communities, and the legislation addressed those racial and ethnic disparities by reducing the penalty for unlawful possession of marijuana to a violation punishable by a fine, and by creating a process for individuals who have been convicted for possessing small amounts of marijuana to have their records expunged. 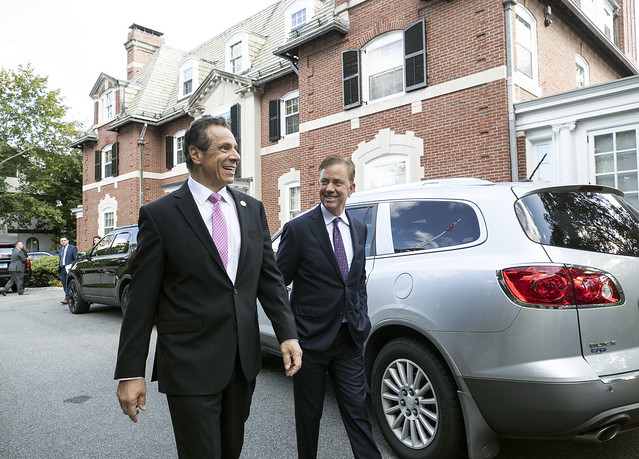 Earlier this month, Governor Cuomo announced New York State is the first state in the nation to implement a ban on the sale of flavored e-cigarettes and nicotine e-liquids. Flavoring is a key youth marketing strategy of the vaping/aerosol industry and flavors are largely responsible for the dramatic increase in use of e-cigarettes by youth and are a principal reason that youth initiate and maintain e-cigarette use. The Governor also directed State Police and DOH to immediately partner to ramp up enforcement efforts against retailers who sell to underage youth, with the possibility of criminal penalties, in addition to announcing that he will advance legislation to ban deceptive marketing of e-cigarettes to teens and children. The Department of Health will provide retailers in New York with an approximate two-week grace period before conducting visits to enforce the flavoring ban beginning on Friday, October 4. Local health departments and the Department's District Offices, with State oversight, will handle enforcement. New York retailers who violate the ban will face fines of up to $2,000 per violation, which is defined as each unit of flavored e-liquid or product containing e-liquid that is possessed, manufactured, sold or offered for sale.