Governor Andrew M. Cuomo and State Comptroller Thomas P. DiNapoli today delivered an update on State revenues, after the Division of the Budget observed a decline in Personal Income Tax receipts in December and January. The Governor and Comptroller attributed the decline to the federal tax legislation's elimination of full state and local tax deductibility, which disproportionately impacted New York and other predominantly Democratic states. Similar revenue declines have also been observed in other states. Amendments to the 2020 Executive Budget will include revisions to reflect updated impacts to the State financial plan.

"The federal administration's SALT policy is an economic civil war that helps red states at the expense of blue states, and we are now seeing the potentially devastating effect of it in the form of significantly lower tax receipts," Governor Cuomo said. "These changes hurt our economy and make New York less competitive, and we will not stop ringing the alarm bell about this punitive policy until Congress reverses it."

"The big drop in state revenues in January is the most serious fiscal shock our state has faced in years," State Comptroller Thomas P. DiNapoli said. "Governor Cuomo is right to get ahead of this issue and to fight the federal government's unfair tax policies. The disruptive impact of SALT cannot be ignored. We are watching this revenue decline closely to determine how profound the impact will be on the budget picture. We must be wary as we move forward to finalize a state budget, and we need to shore up our rainy day funds in case a storm hits."

"The federal tax law has led to a decrease in revenues and has increased taxes for middle-class New Yorkers," said Lieutenant Governor Kathy Hochul. "We will continue to fight these attacks from Washington and reject the elimination of the full SALT deduction to ease the tax burden on New Yorkers and ensure fiscal stability."

The federal administration's SALT policy is an economic civil war that helps red states at the expense of blue states, and we are now seeing the potentially devastating effect of it in the form of significantly lower tax receipts.

The reduction in Personal Income Tax receipts was observed both for the withholding component, which largely comes from current wages, including bonus income, and the estimated payment component, which mostly reflects nonwage income. Estimated payments are $2.3 billion below forecast, consistent with results in the same period for similarly situated states.

New York's tax code is highly progressive. The combined state/local tax rate for high-income New Yorkers is the second highest in the country. The top 1% of taxpayer accounts for nearly half (46%) of State Income Tax liability. More than 95 % of the tax increase from SALT falls on the top 20% of taxpayers - these taxpayers pay 87% of New York income taxes.

Our tax base is getting more diversified, however SALT impacts progressive tax policies disproportionately. SALT encourages high-income New Yorkers to move to other states and if even a small number of high-income taxpayers leave the state, it would harm State revenues and impact critical funding for education, health care, infrastructure, and the middle-class tax cuts. 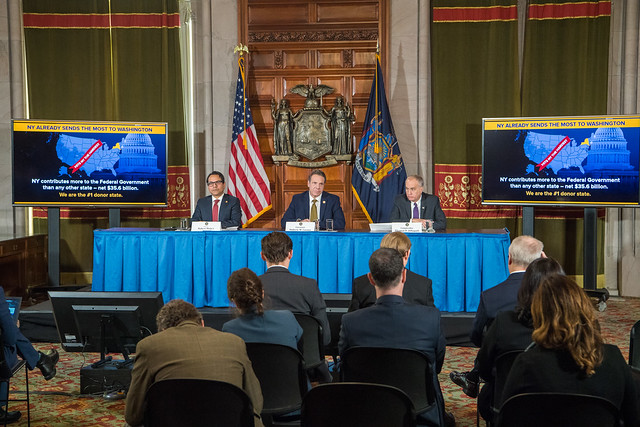 While other states have experienced the detrimental impacts of SALT, as the number one donor state in the country sending Washington $35.6 billion each year, New York continues to feel the disproportionate effect of the deduction in the following ways:

In February 2018, Governor Cuomo launched the Tax Fairness for New York Campaign to combat the combat the anticipated impacts of the federal tax law. As part of this campaign, the Governor launched a website to inform New Yorkers of the State's efforts to fight the tax law, including a lawsuit against the federal government, a repeal of the law, and an overhaul of the tax code.