'Save Our Waters' Bill AvailableHere and Bill Memo Available Here

Governor Andrew M. Cuomo today advanced the 'Save Our Waters' bill to prohibit the leasing of lands, including underwater lands, for offshore drilling and exploration, and drilling infrastructure, in New York State waters. The Governor's action to protect New York's waters from oil and gas exploration was prompted by the Trump administration's plan to vastly expand offshore drilling in the Atlantic and Pacific oceans.

"The federal government's plan to open coastal waters to drilling shows an absolute disregard for science and history," Governor Cuomo said. "Offshore drilling would make our coastal communities vulnerable to the dangers of oil spills and other drilling disasters and jeopardize the health of our robust marine economy. New York will do everything in our power to prevent environmental disasters and will continue to safeguard our offshore assets and bolster our efforts to support renewable energy development."

In January 2018, the federal government threatened New York's coastline with its Outer Continental Shelf Oil and Gas Program for 2019-2024, proposing to make more than 90 percent of the total offshore acreage in the United States available to oil and gas drilling. This plan would open two areas of the North Atlantic coast adjacent to New York State for fossil fuel exploration. An exclusion from the offshore drilling program was granted to Florida on the grounds that it relies heavily on tourism as one of the nation's top ocean economies. Governor Cuomo formally requested on March 9 that New York waters be excluded from the federal drilling program.

The 'Save Our Waters' bill:

Long Island and the New York Harbor are home to 11.4 million people, with 60 percent of our state's population living along nearly 2,000 miles of tidal coastline. The Port of NYNJ is the largest on the Atlantic seaboard and a major spill that disrupted operations would be devastating to the national economy. The port supports 400,000 indirect jobs and 229,000 direct jobs while generating $90 billion in combined personal and business income and $8.5 billion in federal, state, and local taxes. New York strongly opposes the Department of the Interior's National Outer Continental Shelf Oil and Gas Leasing Program as it poses an unacceptable threat to New York's ocean resources, economy, and communities.

In addition, offshore drilling is contrary to New York's aggressive efforts to move toward cleaner energy resources, including the recent nation-leading $1.4 billion investment dedicated to on-shore renewable energy projects and a goal of developing 2,400 megawatts of offshore wind generation by 2030. The recently awarded projects include 22 solar farms, demonstrating that large-scale solar power is economically viable across the State, three wind projects, and one hydroelectric project. The awarded projects are expected to generate enough renewable energy to power more than 430,000 homes and reduce carbon emissions by more than 1.6 million metric tons, the equivalent to taking an estimated 340,000 cars off the road.

The effort to protect New York waters from fossil fuel exploration, drilling, and infrastructure complements the Governor's recent effort to expand artificial reefs to improve the State's diverse marine life and boost Long Island's recreational and sport fishing industries. The Governor has launched a comprehensive artificial reef program that will deploy and place materials, including tug boats, barges, and scows, as well as concrete and clean, recycled materials from the demolition of the former Tappan Zee Bridge, in the Long Island Sound and the Atlantic Ocean. These materials will support the development of six artificial reefs on Long Island at sites off the shores of Smithtown, Shinnecock, Moriches, Fire Island, Hempstead, and Rockaway.

"New York will do everything in our power to prevent environmental disasters and will continue to safeguard our offshore assets and bolster our efforts to support renewable energy development."

DEC Commissioner Basil Seggos said, "While the federal government is moving energy policy backward, with potentially devastating impacts to New York, Governor Cuomo is leading the nation into the future in the transition to a clean energy economy. Oil and gas exploration, drilling, and related disasters are incompatible with New York's multi-billion-dollar coastal economy. Rather than endangering the environmental and economic health of our coasts, New York is carefully and responsibly expanding renewable energy to support the state's comprehensive efforts to reduce greenhouse gas emissions and tackle climate change."

Alicia Barton, President and CEO, NYSERDA said, "The steps Governor Cuomo is taking today to prevent offshore drilling from occurring off New York's Atlantic Coast will spare generations to come from the potentially devastating effects drilling can have on coastal communities and our treasured natural resources.  As the federal government stands down on mitigating climate change, New York is aggressively stepping up its pursuit of a cleaner future—one that combines renewable energy like wind and solar with greater energy efficiency to create more sustainable communities throughout the state."

Congressman Jerrold Nadler said, "The proposal to allow oil and gas drilling in nearly all U.S. coastal waters is yet another ploy by the Trump Administration to unravel environmental protections and promote profits for the big oil companies. History has shown us the dangers, both to the environment and to public safety, that oil and gas drilling causes. I commend Governor Cuomo on today's announcement of vital legislation to prohibit offshore drilling and protect New York waters."

Senator Todd Kaminsky, Ranking Member of the Senate Environmental Conservation Committee, said, “We have a duty to protect our planet and its bountiful natural resources here on Long Island and across our state. Offshore drilling is dangerous, and drives our energy priority backwards. Thanks to the leadership of Governor Cuomo, we will continue to put our environment and its waterways first — especially when Washington fails to protect our planet.”

Assemblyman Steve Englebright, Chair of the Committee on Environmental Conservation, said, "My Assembly colleagues and I held a hearing on Long Island in February and there was unanimous condemnation of the federal government's proposal to open up our waters to drilling for oil and gas. I am pleased to join with Governor Cuomo to take aggressive action to protect New York's environment from the federal government's regressive policies. Prohibiting offshore drilling infrastructure in our water will safeguard New York from its potentially devastating effects. I commend Governor Cuomo for showing true commitment to keeping New York's environment clean, beautiful, and protected."

Assemblywoman Christine Pellegrino said, "I am proud that New York is taking the bold steps forward that are necessary in protecting our environment. Today we sent a loud message to the country that we will not put the health and safety of our communities before special interests by standing against any efforts to allow drilling off of the shores of Long Island and New York State."

Nassau County Executive Laura Curran said, "We will not stand by while the local environment is once again attacked by the federal government. We stand with Governor Cuomo and thank him for his continued dedication to being a true protector of our local waters and way of life." 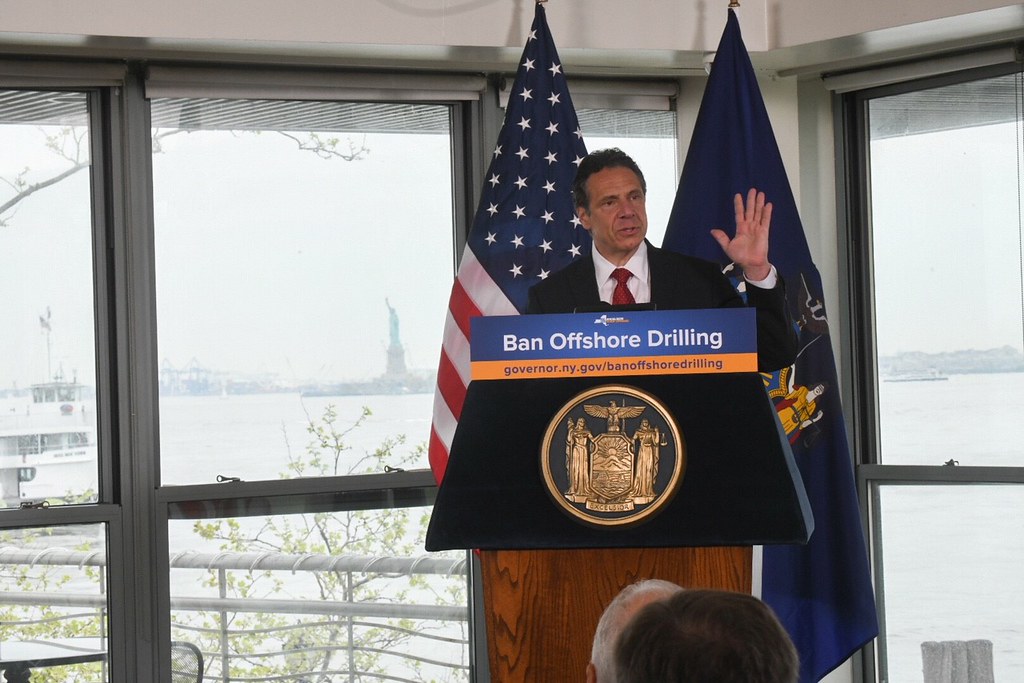 Suffolk County Executive Steve Bellone said, "Long Islanders are lucky to have a fearless environmental advocate in Governor Cuomo. While the federal government attempts to disrupt our most valuable resource - our waters - the Governor is once again standing tall against federal abuses of our environment with this new action to stop offshore drilling. Thank you, Governor, for your commitment to protect the environment for future generations."

Costa Constantinides, NYC Council Member and Chair of the Council's Environmental Protection Committee, said, "If we are going to have any real chance at meeting our 80 by 50 goal, it's vital that we move away from fossil fuel extraction. Offshore drilling threatens not only our planet but our region's fishing and tourism industries as well. At a time when the federal government is jeopardizing our country's future, Governor Cuomo's legislation to prohibit offshore drilling and the expansion of fossil fuel infrastructure in New York waters is exactly the kind of policy that will get us on a truly sustainable path. I want to thank the Governor for all the hard work he's done to make our state a leader in fighting climate change."

Adrienne Esposito, Executive Director of Citizens Campaign for the Environment, said, "Over the century, the oil and gas industry has amassed an injurious track record of oil spills and other environmental disasters, which have had significant, lasting impacts on our environment and public health.  The federal government's offshore drilling plan significantly increases the risk of even greater environmental disasters across our coastal regions.  As renewable energy technology is deployed in our state and our nation, it is reducing the need for fossil fuels.  We can no longer be fossil fools and continue to advance outdated, potentially damaging offshore drilling. The time for change is now.  We are heartened that Governor Cuomo has a vision for our state and our nation that embraces renewable energy and transitions us away from the destructive fuels of yesterday."

Sarah Chasis, Director for Oceans at the Natural Resources Defense Council, said, "Today's important action by Governor Cuomo sends a message that New York is unwilling to accept the risks that come with offshore drilling.  The Trump administration's proposal for oil and gas leasing would threaten nearly all of our coastal waters, and the coastal economy we rely on for food, jobs and recreation.  Hundreds of thousands of New York jobs and billions of state dollars depend on clean, oil-free water and beaches and abundant fish and wildlife.  There's no reason to be courting danger with drilling.  We should be investing in a clean energy future."

Stu Gruskin, Chief Conservation and External Affairs Officer for The Nature Conservancy in New York, said, "New York's waters are home to iconic marine mammals, critical keystone species like menhaden, and important commercial fisheries, not oil and gas exploration.  The Nature Conservancy in New York applauds Governor Cuomo and our state legislators, including the Long Island delegation, for protecting our state's coastal waters and the communities that depend on them. At a time where we need to double down on actions to mitigate climate change, we should be looking towards the future set by the State's ambitious renewable energy goals and responsible offshore wind development, not new fossil fuel exploration."

Ana Paula Tavares, executive director of Audubon New York and Connecticut, said, "New York's shorelines provide a place for people to live, work and relax, while also serving as some of the most important bird and wildlife habitat in the Western Hemisphere. Needless to say, our coasts are no place for offshore drilling. We need to preserve New York's coasts for future generations, and Governor Cuomo's proposed legislation is a huge step in the right direction. Audubon looks forward to working with the governor and the legislature to turn this great idea into reality."

John F. Calvelli, WCS Executive Vice President of Public Affairs, said, "The resurgence of wildlife in the waters off the coast of New York City is an encouraging sign. Limiting offshore oil and gas exploration will go a long way in protecting the waters teeming with wildlife-including 40 species of sharks, rays and skates, and endangered species of whales, and countless fish species. A healthy marine ecosystem in and around New York is vital to tourism, jobs and the overall economic health of the City."

Marcia Bystryn, Executive Director of the New York League of Conservation Voters said, "Offshore drilling has no place in New York's energy future, and we commend Governor Cuomo for fighting against this backward proposal. New York's coastal resources are essential drivers of our regional economy and should not be put at risk from oil and gas drilling."