Largest Power Producer in State Can Generate Up to 2,675 Megawatts

During Climate Week, Governor Kathy Hochul today announced completion of a major $460 million modernization and life extension effort at the New York Power Authority's Lewiston Pump Generating Plant and the digitization of the first of 13 hydropower turbines at the Robert Moses Niagara Power Plant. The digitization is the first major milestone of Next Generation Niagara, a $1.1 billion, 15-year modernization and digitization program to significantly extend the operating life of the Niagara Power Project. Together, these projects represent nearly $1.6 billion of clean energy infrastructure investments at the Niagara Power Project that will help advance New York State's aggressive clean energy goal to transition to 100 percent carbon-free electricity by 2040. Governor Hochul visited the Robert Moses plant today to tour the upgrades and digitization efforts.

"Taking bold steps in the fight against climate change has never been more important, and New York State is prepared to lead the way forward taking advantage of carbon-free sources of energy," Governor Hochul said. "By digitizing and modernizing our Niagara Power Project, one of the largest sources of clean energy in the country, we're ensuring that it will continue to power our economy for years to come. This project holds up New York as a shining example of what it takes to modernize and upgrade a large, complex generation resource."

The Robert Moses and Lewiston Pump Generating plants, which together comprise the Niagara Power Project, have a combined net dependable capability of 2,675 megawatts (MW), making the Niagara Power Project the largest generating facility in the state and one of the largest in the country. One MW is enough electricity to meet the power needs of 800 to 1,000 typical homes. The Lewiston Pump Generating Plant and Robert Moses Power Plant improvements include replacing aging equipment with the latest machinery reflecting advanced digital technologies for optimizing the hydroelectric project's performance. The projects will secure the combined plant's long-term future as a clean power generator that spurs economic development in Western New York and across the state through its low-cost power allocation programs, including New York's ReChargeNY program. The Niagara Project, through these programs, directly supports more than 200,000 jobs and $13 billion in capital investments.

Taking bold steps in the fight against climate change has never been more important, and New York State is prepared to lead the way forward taking advantage of carbon-free sources of energy,

NYPA Chairman John R. Koelmel said, "As we look for ways to rebuild the economy and recover from the COVID-19 pandemic, this modernization and digitization project allows NYPA to continue to generate clean energy, provide low-cost power to job-producing companies and accelerate New York's journey toward a clean energy future. Historians will look back on the work we are doing to transform the Niagara Power Project as a pivotal moment in New York's move to decarbonize its energy grid."

NYPA President and CEO Gil C. Quiniones said, "Congratulations to the team at the Niagara Power Project on advancing these milestones in this monumental clean energy infrastructure investment. Against the backdrop of a pandemic, and numerous other challenges, this is an extraordinary accomplishment. The careful, collaborative work to upgrade both of the plants that comprise the Niagara Power Project is an integral part of a multi-year effort to transform New York's energy system."

Lewiston Pump Generating Plant Life Extension and Modernization Complete
A now complete 10-year, $460 million life extension and modernization of the Lewiston Pump Generating Plant (LPGP), which began in 2012, included the replacement of the facility's 12 pump-turbines and its generator step-up transformers, which date back to 1961 when the Niagara plant first went into service. Overhaul work on all 12 turbines was completed in August.

LPGP provides clean hydropower during periods of peak power demand, supplementing the output of the Robert Moses Niagara Power Plant, the main generating facility at the Niagara Power Project. The work that concluded at the LPGP involved the replacement of one pump-turbine every eight to nine months, ensuring that 11 of the 12 LPGP turbine units were available for operation during the upgrade so that NYPA could meet commitments to its power customers. The plant also services municipalities and rural electric cooperatives across the state. Governor Hochul celebrated the life extension and modernization project's midpoint at an event at the plant in 2017. 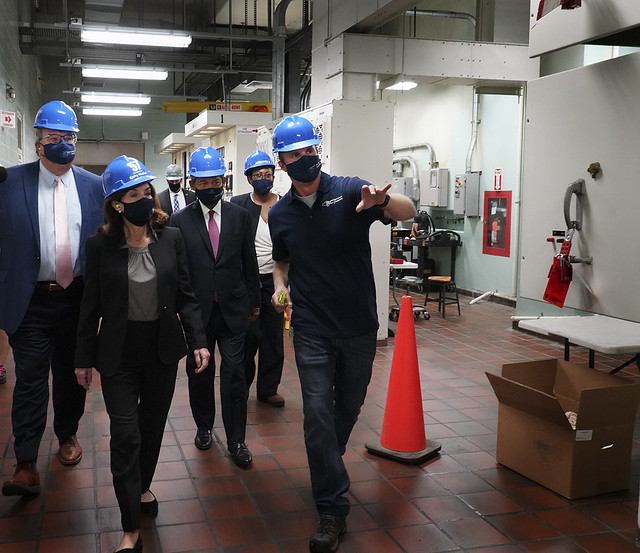 NextGen First Turbine Digitized
Launched in July 2019, Next Generation Niagara is a $1.1 billion, 15-year modernization and digitization program to significantly extend the operating life of the Robert Moses Niagara Power Plant in Lewiston. The recently completed installation of new digital controls on the first turbine generator unit included making corresponding digital connections to the facility's control room as part of the plant's overall control room upgrade and redesign, and to the plant's switchyard where Niagara's power is distributed across New York's transmission system. In the switchyard, workers installed digital controls on the transformers and circuit breakers corresponding to the upgraded turbine. This animation describes the digital connections between the generating unit, the control room and the switchyard. Work to digitize the first turbine unit, which began last November, is part of a design build contract NYPA trustees awarded to Burns and McDonnell and includes subcontracts to Emerson, a global provider of automation solutions, and Ferguson Electric of Buffalo.

In addition to digitizing the plant's generating units and building a new back-up control room, the Next Generation Niagara initiative encompasses a comprehensive inspection of the Robert Moses Plant's penstocks—the 485-foot long hollow pipes that are 24 feet in diameter along the face of the project that carry water from the forebay to the turbine generators; replacement of the 630-ton crane that enables mechanical work on the turbines; and the overhaul and/or replacement of mechanical components that have reached the end of their operating life.

A planned unit outage to digitize the next turbine generator unit control system as part of the multi-year #NextGenNiagara modernization and digitization project is expected to begin May 2022.

Senator Kevin Parker said, "Clean, renewable hydropower is one of New York State's greatest resources. I'm pleased to celebrate the work the New York Power Authority is undertaking to ensure the Niagara Power Project continues to provide vital power to New Yorkers and economic support well into the future, as we work to decarbonize our energy system and meet New York's ambitious clean energy targets. Thank you to NYPA for keeping these important upgrade projects moving forward despite challenges posed by the pandemic."

Senate Minority Leader Rob Ortt said, "With this enormous investment into the Niagara Power Project, New York State and the New York Power Authority are demonstrating their commitment to Western New York residents, Western New York businesses, and Western New York energy. Our region and our state are blessed with one of the greatest natural sources of energy anywhere in the world, and our ability to harness that energy will allow us to continue providing local residents and businesses with reliable, clean energy for years to come."

Assemblymember Michael J. Cusick said, "As we continue to transition our energy grid to clean renewables it is crucial that we invest significantly in our renewable energy infrastructure. The upgrades being completed at the Robert Moses Power Plant and the Lewiston Pump Generation Plant perfectly demonstrate our state's commitment to building the energy grid of the future."

Assemblymember Angelo Morinello said, "The Niagara Power Project has been the standard bearer for clean, renewable energy in New York State. The multiyear commitment to modernize, digitize and extend the operating life of this New York state asset will continue its importance in providing clean renewable energy far into the future.  Thank you Governor Hochul for your vision in championing the future of clean energy."

New York State's Nation-Leading Climate Plan
New York State's nation-leading climate agenda is the most aggressive climate and clean energy initiative in the nation, calling for an orderly and just transition to clean energy that creates jobs and continues fostering a green economy as New York State recovers from the COVID-19 pandemic. Enshrined into law through the Climate Leadership and Community Protection Act, New York is on a path to achieve its mandated goal of a zero-emission electricity sector by 2040, including 70 percent renewable energy generation by 2030, and to reach economy wide carbon neutrality. It builds on New York's unprecedented investments to ramp-up clean energy including over $21 billion in 91 large-scale renewable projects across the state, $6.8 billion to reduce buildings emissions, $1.8 billion to scale up solar, more than $1 billion for clean transportation initiatives, and over $1.2 billion in NY Green Bank commitments. Combined, these investments are supporting more than 150,000 jobs in New York's clean energy sector in 2019, a 2,100 percent growth in the distributed solar sector since 2011 and a commitment to develop 9,000 megawatts of offshore wind by 2035. Under the Climate Act, New York will build on this progress and reduce greenhouse gas emissions by 85 percent from 1990 levels by 2050, while ensuring that at least 35 percent with a goal of 40 percent of the benefits of clean energy investments are directed to disadvantaged communities, and advance progress towards the state's 2025 energy efficiency target of reducing on-site energy consumption by 185 trillion BTUs of end-use energy savings.

About NYPA
NYPA is the largest state public power organization in the nation, operating 16 generating facilities and more than 1,400 circuit-miles of transmission lines. More than 70 percent of the electricity NYPA produces is clean renewable hydropower. NYPA owns operates approximately one&#8209;third of New York's high&#8209;voltage power lines. These lines transmit power from NYPA's three large hydroelectric generation facilities, including its flagship Niagara plant, and from wind power generation facilities, connecting nearly 7,000 megawatts of renewable energy to New York State's power grid. This includes more than 6,200 megawatts of hydropower and approximately 700 megawatts, or more than a third, of New York State&#8209;generated wind energy. NYPA uses no tax money or state credit. It finances its operations through the sale of bonds and revenues earned in large part through sales of electricity. For more information visit www.nypa.gov and follow us on Twitter @NYPAenergy, Facebook, Instagram, Tumblr and LinkedIn.

About the Niagara Power Project
Following the collapse of Niagara Mohawk's Schoellkopf Power Station in 1956, and the elimination of tens of thousands of jobs in the Niagara region and nearly 25 percent of the city's tax base, the Federal Power Commission issued a license in 1957 to the New York Power Authority to redevelop Niagara Falls' hydroelectric power. The Power Authority employed an army of 11,700 workers and within three years, 12 million cubic yards of rock were excavated. The herculean effort led to the construction of a massive main structure that is 1,840 feet long, 580 feet wide and 384 feet high.

When the Niagara Power Project produced its first power in 1961, it was the largest hydropower facility in the Western world and President John F. Kennedy called it "an example to the world of North American efficiency and determination." After 60 years of operation and its obtaining a new 50-year federal operating license in 2007, the Niagara Power Project remains the crown jewel of New York's power infrastructure.