Reminds New Yorkers to Vote in the Wear a Mask New York Ad Contest by Monday, May 25th; 92,000 People Have Already Voted

Amid the ongoing COVID-19 pandemic, Governor Andrew M. Cuomo today announced the launch of the $100 million New York Forward Loan Fund to provide flexible and affordable loans to help small businesses, focusing on minority and women owned small businesses, that did not receive federal COVID-19 assistance. The state will take a smart, targeted approach for distributing these loans, focusing on businesses with 20 or fewer employees and less than $3 million in gross revenues. Businesses interested in receiving a loan should visit esd.ny.gov/nyforwardloans.

Governor Cuomo also announced the Long Island and Mid-Hudson Valley Regions will be permitted to begin construction staging in anticipation of phase one of reopening. If the number of deaths continues to decrease and the tracing is online, both regions could reopen next week.

The Governor also announced the launch of a new pilot program with 52 independent pharmacies to conduct 7,000 tests per week. New York State now has more than 750 testing sites across the state. The Governor also encouraged eligible New Yorkers to visit coronavirus.health.ny.gov to find a nearby testing site and get tested.

The Governor also announced that the state is making its contact tracing training curriculum available at no cost to all states through the National Governors Association to speed the process of creating contact tracing programs. The state partnered with Bloomberg Philanthropies and the Bloomberg School of Public Health at Johns Hopkins University to develop this comprehensive online curriculum to train potential contact tracers. Contact tracing is currently underway in seven regions of the state - the Capital Region, Central New York, Finger Lakes, the Mohawk Valley, the North Country, the Southern Tier and Western New York.

The Governor also reminded New Yorkers to vote in the state's Wear a Mask New York Ad Contest, which was launched by the Governor on May 5th and is being overseen by his daughter Mariah Kennedy Cuomo. New Yorkers can vote for the winning ad until Monday May 25th at WearAMask.ny.gov, and 92,000 people have voted to date. The winning ad will be announced on Tuesday, May 26th, and that ad will be used as a public service announcement.

Small businesses are the engine of the New York economy, but they are now facing some of the toughest challenges in this pandemic. 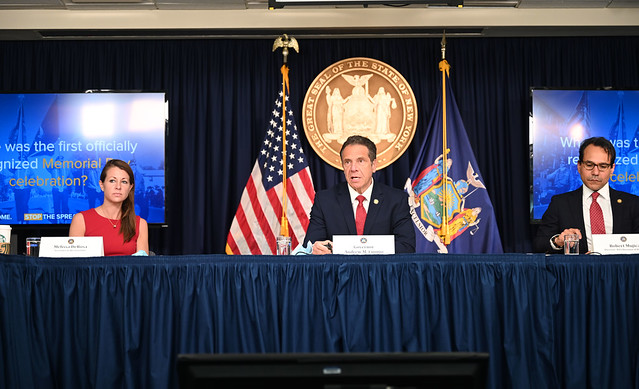 "Small businesses are the engine of the New York economy, but they are now facing some of the toughest challenges in this pandemic," Governor Cuomo said. "Helping our small businesses is a top priority, and we are starting the New York Forward Loan Fund and making more than $100 million available to provide loans to small businesses, focusing particularly on minority and women owned businesses that have faced even greater risks and received less in federal relief throughout this pandemic."

Finally, the Governor confirmed 1,696 additional cases of novel coronavirus, bringing the statewide total to 358,154 confirmed cases in New York State. Of the 358,154 total individuals who tested positive for the virus, the geographic breakdown is as follows: