Governor Announces Three New Sites to Add 695 Hospital Beds to the State's Capacity; State Will Begin Using Some Facilities Only for Patients with COVID-19

Amid the ongoing COVID-19 pandemic, Governor Andrew M. Cuomo is issuing an executive order to move the presidential primary election from April 28 to June 23, aligning it with the congressional and legislative primaries in New York.

Governor Cuomo also issued an executive order to enable the tax filing deadline for personal and corporate taxes to be pushed back to July 15. The federal government took similar action earlier this month.

The Governor also announced that the State Department of Health Wadsworth Lab is working in partnership with others labs to evaluate antibody testing that is designed to help very sick COVID-19 patients.

Following a conversation with President Trump this morning, Governor Cuomo also announced the federal government has approved four new sites for temporary hospitals for construction by the Army Corps of Engineers - the Brooklyn Cruise Terminal, the Aqueduct Racetrack facility in Queens, CUNY Staten Island and the New York Expo Center in the Bronx - adding an additional 4,000 beds to the state's capacity. The Governor toured the four sites yesterday. These temporary hospital sites are part of the Governor's goal of having a 1,000-plus patient overflow facility in each New York City borough as well as in Westchester, Rockland, Nassau and Suffolk counties.

Every emergency situation is unique, but the number one rule is always plan ahead and be proactive — and that's exactly what we have been trying to do

"Every emergency situation is unique, but the number one rule is always plan ahead and be proactive — and that's exactly what we have been trying to do," Governor Cuomo said. "Our mission is to be prepared and have the proper equipment, supplies, facilities and personnel when the apex hits. We are continuing to advance emergency measures that reduce density as much as possible, and to that end we are going to delay the presidential primary election until June because it's not wise to be bringing large numbers of people to one place to vote."

The Governor also announced that the Empire State Development Board of Directors approved $7.5 million in COVID-19 Business Counseling support to 70 non-profit partners across New York State. The funding will enable these organizations to provide small businesses with necessary guidance to secure disaster assistance, such as Small Business Administration Economic Injury Disaster Loans, amid the COVID-19 pandemic. Up to 24 Entrepreneurship Assistance Centers and up to 23 Small Business Development Centers will receive $5 million, with an additional $2.5 million awarded to up to 23 Community Development Financial Institutions. 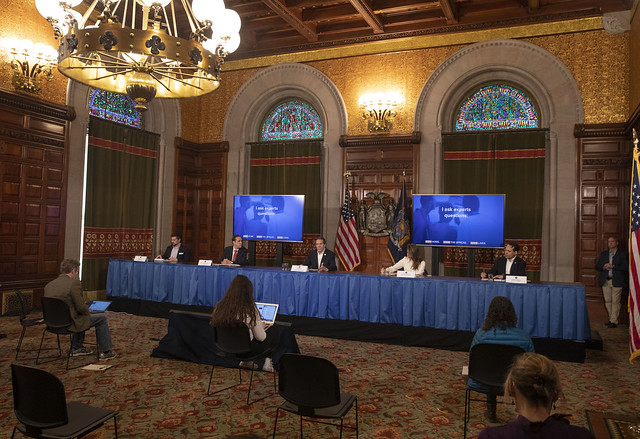 Finally, the Governor confirmed 7,681 additional cases of novel coronavirus, bringing the statewide total to 52,318 confirmed cases in New York State. Of the 52,318 total individuals who tested positive for the virus, the geographic breakdown is as follows: