Flags Will Remain Lowered While New York is on PAUSE

2,400 Brand New BiPAP Machines Donated to the State by Mercury Medical, Flown to New York from Florida for Free by JetBlue and Transported on the Ground by Southern Glazer's

Amid the ongoing COVID-19 pandemic, Governor Andrew M. Cuomo today directed flags on state government buildings to be flown at half-staff in honor of those we have lost to COVID-19. The flags will remain lowered while New York is on pause.

Governor Cuomo also announced that on Thursday, April 9th, the Kosciuszko Bridge, the Governor Mario M. Cuomo Bridge, the spire of One World Trade Center and LaGuardia Airport parking garages will be lit blue as part of the #LightItBlue campaign. The initiative simultaneously lights up buildings, landmarks and LED screens across the US to show support and gratitude to those health care professionals and essential workers on the frontlines and create a universal symbol of solidarity and hope.

The Governor also announced that SUNY Albany President Havidan Rodriguez will work with the State Department of Health and Northwell Health to conduct more COVID-19 data research and increase testing in minority communities to determine why more people in minority and low-income communities have higher rates of infection.

Governor Cuomo also directed the State Department of Labor to immediately make $600 in additional weekly unemployment benefits available to all New Yorkers. The additional benefits were included in the Federal CARES Act, but, unlike other states, New York began delivering the extra unemployment insurance to unemployed individuals before Federal funds are disbursed to the states. New York is also extending the period covered by unemployment benefits for another 13 weeks, for a total of 39 weeks.

Every number is a face and we have lost so many people, many of them front-line workers putting themselves at risk to do the essential functions that we all need for society to go on.

The Governor also announced that 2,400 brand new BiPAP machines have been donated to the state by Mercury Medical and are being flown to New York from Florida for free by JetBlue and transported on the ground by Southern Glazer's.

The Governor also announced that Delta, JetBlue and United are offering free travel to New York for COVID-19 medical workers. To date, more than 90,000 health professionals, including more than 25,000 out-of-state individuals, have signed up to serve as part of the state's surge healthcare force during the ongoing COVID-19 pandemic.

The Governor also announced that the state has distributed over one million free bottles of NYSClean hand sanitizer across all 62 counties in the state. The hand sanitizer has been distributed to county emergency managers, first responders, health care workers, nursing homes, law enforcement, homeless organizations and other non-profits, transportation systems including the MTA, Port Authority, Thruway and other public transportation entities across the state.

"We are flattening the curve because we are rigorous about social distancing, and if we continue doing what we are doing, we believe the curve will continue to flatten, but this is not a time to get complacent," Governor Cuomo said. "That is the good news, but the bad news is terrible - the death toll has been going steadily up and it reached a new height yesterday. Every number is a face and we have lost so many people, many of them front-line workers putting themselves at risk to do the essential functions that we all need for society to go on. In honor of those we have lost to the virus, I am directing all flags to be flown at half-mast. And I continue to urge all New Yorkers to be responsible, adhere to all social distancing protocols and remember the life you are risking may not be your own." 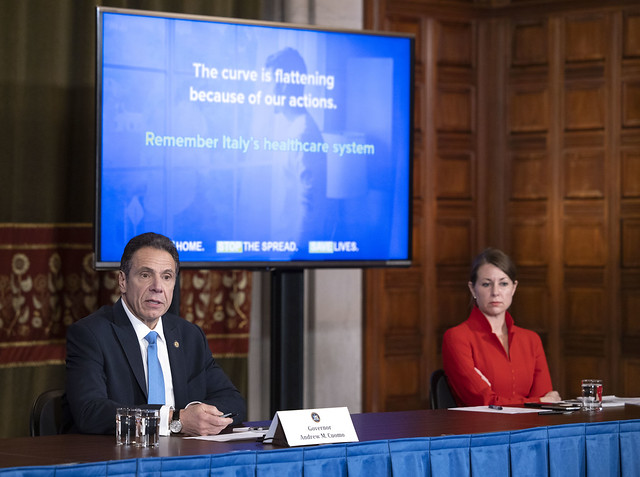 Finally, the Governor confirmed 10,453 additional cases of novel coronavirus, bringing the statewide total to 149,316 confirmed cases in New York State. Of the 149,316 total individuals who tested positive for the virus, the geographic breakdown is as follows: