Announces DFS Will Request Health Insurers Disclose Number of Registered Nurses, Doctors Who Work for Them So State Can Ask to Temporarily Serve

Governor Andrew M. Cuomo announced an initial delivery of hospital supplies to the Jacob K. Javits Center where FEMA has started to build a 1,000-bed temporary hospital that will help increase New York's hospital capacity to combat COVID-19 and open next week. This is in addition to the four sites selected by the Army Corps of Engineers that will create temporary hospitals in downstate New York with total capacity up to 4,000. The federal administration has deployed 339,760 N-95 masks, 861,700 surgical masks, 353,300 gloves, 145,122 gowns and 197,085 face shields to New York State, with many state supplies already located at the Javits Center.

The Governor also announced that three former Secretaries to the Governor — Steve Cohen, Bill Mulrow and Larry Schwartz — are joining the Governor's COVID-19 Task Force. Mulrow and Cohen will be tasked with developing aNYS Forward Plan - a strategy to restart the economy following the NYS on Pause executive order. Schwartz is tasked with helping the State acquire healthcare equipment and supplies and increasing New York's hospital surge capacity.

Governor Cuomo today signed an executive order requiring all hospitals to increase capacity by a minimum of 50 percent, with a goal of increasing capacity by 100 percent.

To support hospital surge capacity, the Governor also announced the State Department of Financial Services is requesting that health insurers disclose the number of nurses, doctors and other health professionals they employ so the state can reach out to those employees and ask them to temporarily serve in the medical field during the ongoing COVID-19 pandemic.

The Governor also announced that the FDA has approved the use of a new experimental drug in New York on a compassionate care basis to help treat patients with COVID-19. The trial will use antibody injections to help stimulate and promote individuals' immune systems against the virus.

Governor Cuomo also announced that the federal government has agreed to cover 100 percent of the cost for the National Guard. Separately, the Governor has also requested 100 percent federal cost share under New York's major disaster declaration that was approved on Friday, March 20th.

Additionally, the Governor announced that the state is opening a drive-thru COVID-19 mobile testing facility in the Bronx. This follows the success of the mobile testing centers in New Rochelle, Rockland County, Staten Island and Long Island in addition to the Bronx. Drive-through mobile testing facilities help keep people who are sick or at risk of having contracted coronavirus out of healthcare facilities where they could infect other people. New York is currently testing more than 16,000 people per day, more than any other state and more than China and South Korea on a per capital basis.

The Governor also launched the 'NY Stronger Together' campaign urging New Yorkers to stay home, stop the spread and save lives. As part of the campaign, celebrities including Robert De Niro, Danny DeVito, Ben Stiller and La La Anthony have sent videos of themselves at home to reinforce the Governor's message that young people must stay home not for themselves, but to help protect older and more vulnerable New Yorkers. The campaign will also aim to highlight donations from major corporations, celebrities, philanthropic organizations to help increase the state's supply capacity. 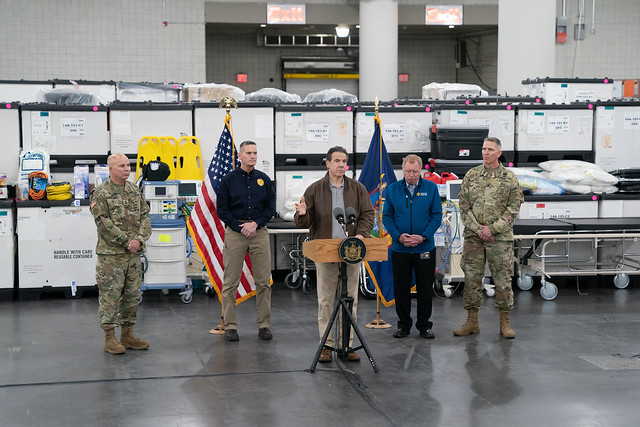 "We know that the most effective way to reduce the rate of spread of the virus is to reduce density and increase testing, and we have a plan in place to do just that," Governor Cuomo said. "We've taken every action that government can take to reduce density and we are testing more than any other state in country, and now we must focus on increasing our hospital capacity and our supply stockpile as quickly as we can to ensure our healthcare system is prepared to handle the apex of the wave. We also still have issues with density control, especially in New York City, and we are continuing to encourage all New Yorkers to think of others and stay inside as much as possible to protect our most vulnerable populations."

Finally, the Governor confirmed 5,707 additional cases of novel coronavirus, bringing the statewide total to 20,875 confirmed cases in New York State. Of the 20,875 total individuals who tested positive for the virus, the geographic breakdown is as follows: