Calls on Federal Government to Prioritize Sending Stimulus Funding to Individuals, State and Local Governments and Businesses - Taxpayers Must Share in Success of Corporations

Acquires 70,000 Doses of Hydroxychloroquine, 10,000 doses of Zithromax and 750,000 Doses of Chloroquine to Implement Drug Trials - Trials Will Start Tuesday

Governor Andrew M. Cuomo today accepted the recommendation of the Army Corps of Engineers for four temporary hospital sites in New York State in an effort to address imminent capacity issues resulting from the COVID-19 pandemic. The Governor visited the four sites - the Jacob K. Javits Convention Center, and locations at SUNY Stony Brook, SUNY Old Westbury and the Westchester Convention Center — yesterday, and New York State is ready for the Army Corps of Engineers to begin construction immediately. Hospitals at the SUNY campus sites will be constructed indoors with outdoor tent support and the dormitories on the campuses will be used for healthcare staff to stay while working at the sites.

Governor Cuomo also announced that FEMA will erect four additional federal hospital facilities within the Javits Center, in addition to the temporary hospital to be constructed by the Army Corps. Each of the four federal hospitals will have 250 beds and come fully equipped and fully staffed by the federal government.

The Governor also announced that the state is continuing to quickly identify sites to repurpose existing healthcare facilities to be used as temporary hospitals. The state on Saturday leased the Brooklyn Health Center for Rehabilitation and Healthcare to serve as a temporary hospital with capacity up to 600 beds.

Additionally, Governor Cuomo called on the federal government to immediately implement the Defense Production Act and nationalize the contracting and acquisition of medical supplies. New York State is already seeing a shortage in medical supplies and personal protective equipment - or PPE - including masks, gloves, gowns and ventilators. This shortage is also impacting other states, leading to price gouging by companies, hospitals competing with one another and states competing with other states and even other countries for supplies. Implementing the Defense Production Act would give the federal government legal authority to mandate private companies to manufacture these critical supplies for all states.

The Governor also called on the federal government to prioritize sending stimulus funding to individuals, state and local governments and businesses. As part of his call, the Governor made it clear that funding to corporations should not be a gift at the expense of taxpayers, and that taxpayers must share in the success of corporations.

We will overcome this challenge and America will be greater for it, and my hope is that New York will lead the way forward.

The Governor also announced that the state will begin to implement drug trials and has acquired 70,000 doses of Hydroxychloroquine, 10,000 doses of Zithromax and 750,000 doses of Chloroquine. The trials will start Tuesday.

Governor Cuomo also urged the FDA to immediately approve serological testing for COVID-19 antibodies, which will help determine which individuals already had the virus and resolved. This will allow more individuals to return to work, including healthcare workers to help address the shortage of medical staff in hospitals.

Governor Cuomo also announced a new State Department of Health Emergency Order requiring all hospitals to develop plans to expand capacity within hospitals. The plan must expand capacity by a minimum of 50 percent with a goal of expanding capacity by 100 percent.

The Governor also announced that the state will mandate that all hospitals must cancel all elective, non-critical surgeries to help expand hospital capacity - effective Wednesday, March 25th.

After visiting New York City yesterday, the Governor is also directing New York City to come up with a plan for review by the state in the next 24 hours to address the lack of adherence to social distancing protocols in the area, including at parks and other public spaces. 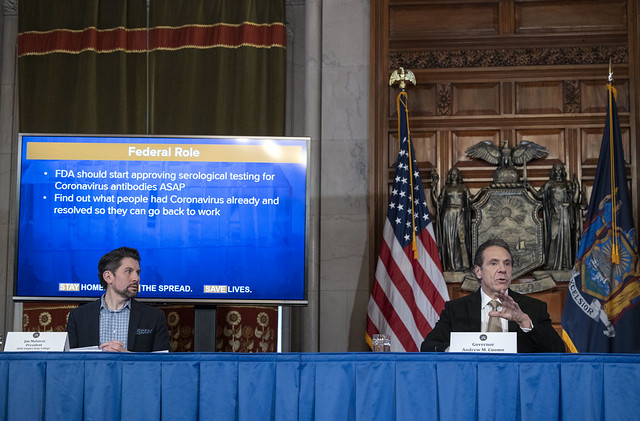 "To get through this crisis we need to be sure our hospitals and healthcare system have the equipment, facilities and staff they need to treat patients and save lives, and we also need to make sure that New Yorkers whose lives have been turned upside down by the virus are getting financial relief to help cope with this crisis," Governor Cuomo said. "In New York we have a plan in place to increase our hospital capacity and supplies and lessen the financial burden on New Yorkers. We are doing everything we possibly can as a state, but we can't do it alone — we need the help of the federal government. I am asking the President for expeditious approval and execution of these hospital facilities, to nationalize the acquisition of medical supplies and to prioritize sending stimulus money to individuals. Time matters and minutes count because there are lives at stake. We are a nation capable of overcoming any challenge — we will overcome this challenge and America will be greater for it, and my hope is that New York will lead the way forward."

Finally, the Governor confirmed 4,812 additional cases of novel coronavirus, bringing the statewide total to 15,168 confirmed cases in New York State. Of the 15,168 total individuals who tested positive for the virus, the geographic breakdown is as follows: