Exit 3 Will Finally Become a Reality with the New Northway-Albany Airport Connector - Slated for Opening in Late 2019, a Year Ahead of Original 2020 Opening Date

Governor Andrew M. Cuomo today announced plans for a new Exit 3 that will provide more direct access to Albany International Airport and alleviate traffic along the Northway, both northbound and southbound. The new exit, which had been talked about for 50 years without coming to fruition, is a key aspect in the airport's $104.6 million modernization which includes construction of a new parking garage and rehabilitation of the airport terminal.

"For 50 years people talked about and studied how to build direct access to Albany Airport, but it never materialized," Governor Cuomo said. "Now we are actually getting it done and the new Exit 3 will cut traffic, accelerate access to the airport, improve the environment and demonstrate once again that when you put investment together with action and competence - you get dynamite and it creates a great economic explosion like the one we are seeing in the Capital Region and across Upstate."

"These additions and improvements to Albany International Airport will mitigate traffic and enhance the overall travel experience," said Lieutenant Governor Kathy Hochul. "The new Exit 3 will provide direct access to the airport and is part of modernization plans that also include a new parking garage and enhancements to the terminal. This project will increase tourism in the area, attracting more visitors and businesses, and further strengthen the economy of the Capital Region."

Since before the completion of the Adirondack Northway more than 50 years ago, numerous discussions and plans have been made to add an Exit 3 to the Northway. In its current configuration, the Northway goes from Exit 2 to Exit 4, both northbound and southbound. The new exit will be part of the Northway-Albany Airport Connector project.

The Exit 3 announcement comes with updates on two state-sponsored projects that will transform the airport and construct a new highway connector to it from the Adirondack Northway (I-87) in Colonie, Albany County. Last August, the Governor awarded $22.1 million in funding for the airport modernization and also announced $50 million to construct an Albany Airport Connector along the Northway, which will ease traffic congestion and provide a first-ever direct link to the airport. This direct link to the Airport will now be the new Exit 3.

The two projects have progressed quickly since they began last fall, with the Albany Airport Connector project progressing ahead of schedule with an anticipated opening of late 2019, a year ahead of the original 2020 target date. The airport and highway connector projects are helping to create more than 1,300 jobs in construction and related fields.

The $22.1 million in State funding for the airport is part of a $54.6 million project to modernize the facility, and is provided through the $200 million Upstate Airport Economic Development and Revitalization Competition, first announced by Governor Cuomo in his 2016 State of the State Address and later passed in the 2017 state budget. Other funding for the modernization project is provided by the Albany County Airport Authority and the Federal government.

For 50 years people talked about and studied how to build direct access to Albany Airport, but it never materialized.

Complementing the modernization effort is the New York State Department of Transportation project that will construct an Albany Airport Connector at Exit 3 of the Adirondack Northway (Interstate 87) in the Town of Colonie, Albany County. The $50 million project will provide direct access to Albany International Airport from the Northway and support regional economic development.

NYSDOT has accelerated the project, which was initially scheduled to begin this spring. Instead, preliminary work got underway last fall and the project has progressed rapidly, with ongoing work performed throughout the winter months.

Construction of a ramp that will "flyover" the Northway from east to west is well underway. At the same time, construction is continuing on the soil embankments that will help support the three new ramps for the new Exit 3 west of I-87 southbound and a new auxiliary travel lane between Exits 4 and 5 on the side of I-87.

For northbound Northway traffic, the new ramp will travel over the Northway in a "flyover" configuration, loop behind and to the west of the Desmond Hotel and come to a new T-intersection with Albany-Shaker Road, close to the airport. For southbound traffic on the Northway, a new off-ramp will be built to travel behind the Desmond Hotel and connect to a flyover ramp that will lead to the new intersection, avoiding traffic on Old Wolf Road.

Last month, the contractor set steel on top of the new pier in the median to connect to the abutments on either side of the Northway, forming the foundation of the future "flyover" ramp. This process took about a week and is now complete

The current northbound Exit 4 will remain unchanged. On the southbound side, a new Exit 4 will provide better local access to Old Wolf Road.

Off the highway nearby, Albany Shaker Road is being widened between Wolf Road and Meeting House Road and new drainage and curbing is being installed. National Grid is relocating electrical and gas lines along the road as well.

Project plans also call for a new, direct on-ramp from Route 155 (Watervliet-Shaker Road) at Exit 5 to the southbound Northway, eliminating the need for the existing ramp off the southbound side of the highway. Embankment construction for the new auxiliary travel lane has begun.

On the northbound side, the on-ramp adjacent to the Times Union building will be extended all the way to Exit 5 for Route 155, creating a longer auxiliary lane that will make it easier for drivers to merge onto the northbound Northway and to depart the highway at Exit 5, benefiting local traffic. A noise wall is planned to be built on the northbound side between Exits 4 and 5.

In October 2015, the Department of Transportation completed a $22.3 million project to replace the bridges carrying the Northway over Albany-Shaker Road. This was the first of two phases of work planned at Exit 4. The 2015 project replaced two bridges that were built as part of the original Northway construction in 1959.

Construction of the airport connector road also will free up large tracts of commercially zoned parcels for commercial redevelopment and improvement by the private sector. These investments are already paying dividends as Piedmont Airlines recently announced plans to expand their workforce at a newly-renovated hangar on airport property.

Albany International Airport's main terminal was originally built in 1928 and then rebuilt in 1962. It underwent its last significant renovation in 1998. About 1.4 million people a year board planes at the airport, which has an outdated appearance and limited parking. The airport redesign includes:

All construction contracts for the new terminal have been awarded and work has begun on bathroom renovations and the new solar panel array system. Additional terminal construction activities will begin this summer.

Renderings of Exit 3 are available here and renderings of the rehabilitated terminal are here. 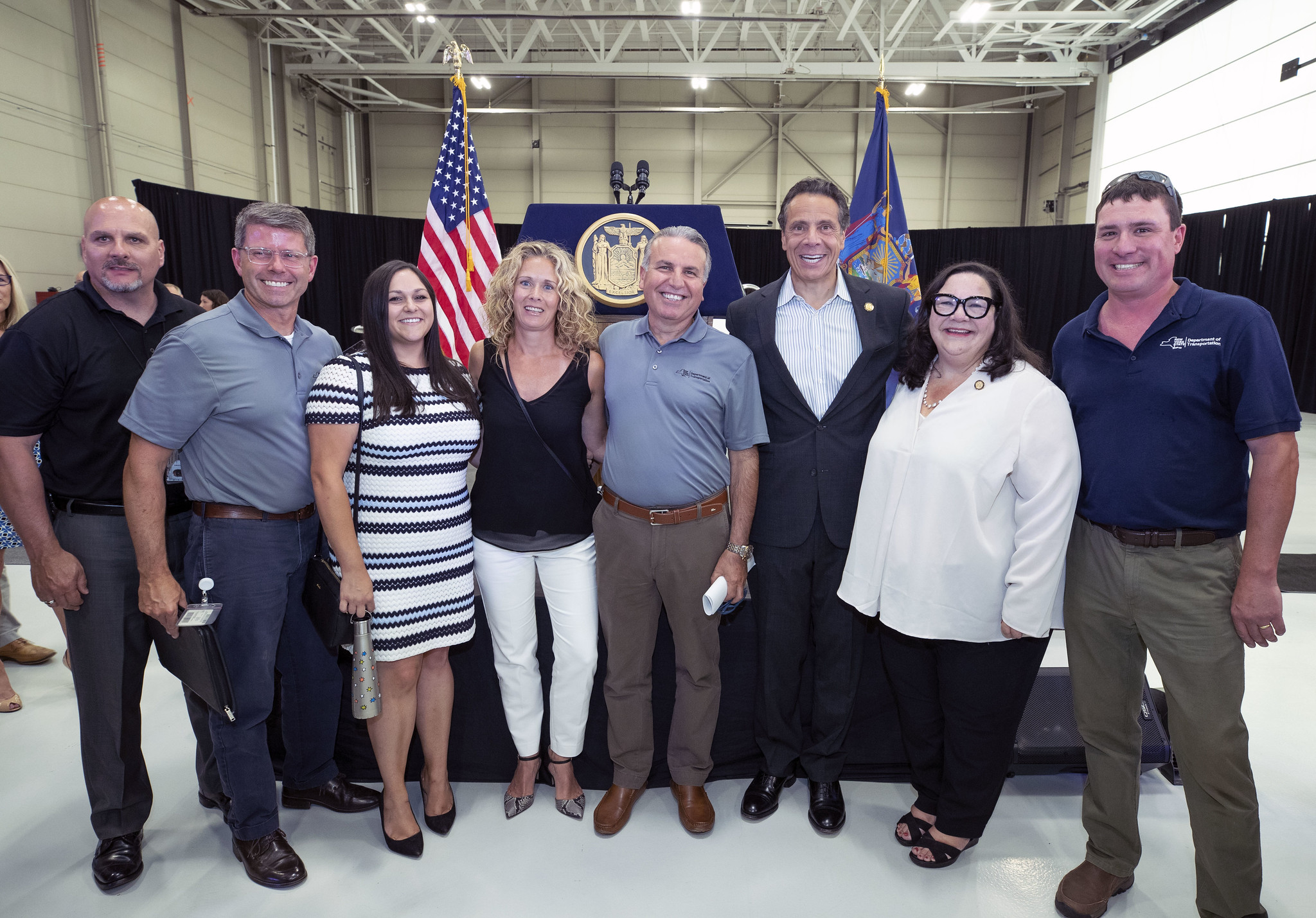 New York State Department of Transportation Commissioner Marie Therese Dominguez said, "Governor Cuomo is leading the way, making smart investments in transportation that are enhancing safety and mobility while supporting regional economies. These two projects are transformative, modernizing the airport for the state's capital city and making it easier than ever to get there on the highway, a win-win for anyone traveling or doing business in this thriving region."

Representative Paul Tonko said, "New York continues to be a national leader in delivering infrastructure investments that, combined with recent federal resources, will improve our quality of life, reduce barriers to economic growth and create or sustain good local jobs. These upgrades at Albany International Airport will play a significant role in supporting tourism, driving new and existing business development and making life easier for people who call our Capital Region home."

Senator Neil Breslin said, "The significant improvements to the Albany International Airport along with the construction of the Northway Airport connector are vital in fueling our upstate economy. I applaud the Governor and the New York State Department of Transportation for their commitment to this project, and I look forward to its completion."

Assembly Member Phil Steck said, "The Albany International Airport is a cornerstone of our region's economy. I am pleased the connector project is moving at a faster than expected pace to alleviate the congestion in Colonie and for all residents of New York State. I again applaud Governor Cuomo for recognizing the importance of this project and the efficiency in which the project is moving."

Seeing is definitely believing when it comes to the progress being made on these two projects that will be transformative to the daily lives of Albany County residents and will improve the experiences for the growing number of tourists visiting the Capital Region. Improving this portion of I-87 is fifty years in the making, and I'm thrilled that we're finally seeing it through and investing in our critical infrastructure with the help of Governor Cuomo," said Albany County Executive Daniel P. McCoy.

Colonie Town Supervisor Paula Mahan said, "I want to thank Governor M. Andrew for his leadership in funding the new Albany Airport Connector and needed airport modernization. Together, these projects will make Colonie International Airport much more accessible and user-friendly, providing a modern and streamlined gateway to the Town of Colonie and the wider Capital District. In addition, the Town has long advocated for this Connector as a way to help alleviate traffic congestion along the Wolf Road corridor. These projects are a win for Colonie and a win for the Capital Region!"

Capital Region Chamber President and CEO Mark Eagan said, "The construction of the new Albany Airport Connector will ensure residents and visitors have quick, direct access to the Albany International Airport, while easing traffic congestion on one of our region's major highways. I commend Governor Cuomo for his commitment to this transformational project."

Albany County Airport Authority CEO John O'Donnell said, "We are grateful for Governor Cuomo's initiative to update New York's airports, his commitment of $22M for the construction of our new 1,000 car parking garage and terminal improvements at Albany International Airport. The airport improvements along with the construction of the new Northway exit to the airport will benefit our air travelers and the entire Capital Region."

About the Upstate Airport Economic Development and Revitalization Competition

The $200 million Upstate Airport Economic Development and Revitalization competition calls on Upstate airports to envision the airport of tomorrow as the new gateway to the region. The Competition builds upon the success of Governor Cuomo's Master Plan Design Competition for LaGuardia and John F. Kennedy Airports, as well as the transformative efforts already underway at several downstate regional airports. Additional funding is being allocated through the Governor's Aviation Capital Grant Program, which supports safety, infrastructure, and economic development projects at smaller airports across the state. The Competition is administered by the New York State Department of Transportation. Under the Competition, the State called upon airports to submit plans that: