Governor Andrew M. Cuomo today unveiled the seventh signature proposal of his 2016 agenda: dramatically expand and improve the Jacob K. Javits Convention Center to stimulate the regional economy. The proposal will expand the Javits Center by 1.2 million square feet, resulting in a fivefold increase in meeting and ballroom space, including the largest ballroom in the Northeast. A four-level, 480,000 square foot truck garage capable of housing hundreds of tractor-trailers at one time will also be constructed to improve pedestrian safety and local traffic flow. The proposal’s total projected cost is approximately $1 billion, paid for by the Javits Center within existing resources. Construction is expected to begin in late 2016. A full album of renderings is available here.

“The Javits Center has long been an economic generator for this state, but we want to build and expand it to ensure it remains a premier venue for the next generation,” Governor Cuomo said. “Through one of the most aggressive development plans in the history of the State of New York, we are transforming one of our largest convention centers into an unparalleled, world-class venue. The new Javits Center will continue to garner millions in economic activity, create jobs and keep New York’s economic momentum moving forward.”

The Javits Center is the busiest convention center in the United States. Located on Manhattan‘s West Side on 11th Avenue between West 34th and West 40th Streets, the six-block facility hosts trade shows, conventions and special events that spur economic activity and job creation. In 2014, the facility hosted 177 events and more than 2 million visitors – ultimately supporting 17,500 jobs locally and generating an estimated 478,000 nightly hotel room reservations. In total, the Javits Center had an economic impact of $1.8 billion last year.

Increase Event Space: The proposal will provide Javits with more than one million square feet of event space. This includes a 60,000 square foot ballroom, which will be the largest such space in the Northeast. Additionally, of the exhibition space, 500,000 square feet will be contiguous space on one level. This 500,000 square foot distinction is an industry benchmark that will allow the Javits Center to pursue additional attractions and enhance its overall competitiveness.

Increase Truck Parking: Each year, approximately 20,000 truck trips deliver and retrieve materials for events at the Javits Center, and these vehicles are forced to park on nearby streets – and a nearby marshaling yard – during an event’s move-in and move-out periods. The Governor’s plan includes a four-level, 480,000 square-foot truck garage constructed on the Javits Center’s property which will remove these trucks from the area’s streets, reducing truck trips by 50 percent and improving air quality and traffic flow. Fewer trucks will improve overall pedestrian safety, creating a healthier environment for the new Hudson Yards neighborhood in the vicinity of the Javits Center. This new marshaling facility will house hundreds of tractor-trailers at one time and feature 35 new loading docks, enabling event organizers to better schedule the delivery and removal of materials and increase the convention center’s overall efficiency.

Increase Solar Power: The proposal includes the installation of a 34,000 square-foot solar energy array, the largest of its kind on a public building in New York State. As a part of the expansion project, the Javits Center will seek LEED Platinum certification. This complements the improvements of a previous renovation completed in 2014 that included a new façade and flooring; mechanical, technology and sustainability systems; and a 6.75-acre green roof, the second largest of its kind in the country. As a result of its sustainable upgrades, the Javits Center has achieved LEED Silver certification from the U.S. Green Building Council.

Create a Terrace on the Hudson: The proposal includes the construction of a new green roof terrace with dramatic views of the Hudson River, capable of accommodating 2,500 guests, further diversifying the types of events the Javits Center can host.

Ultimately, the Governor’s proposal will strengthen the regional economy, create more permanent jobs, and increase tourism and business involved with the Javits Center. Specifically, it is projected to: 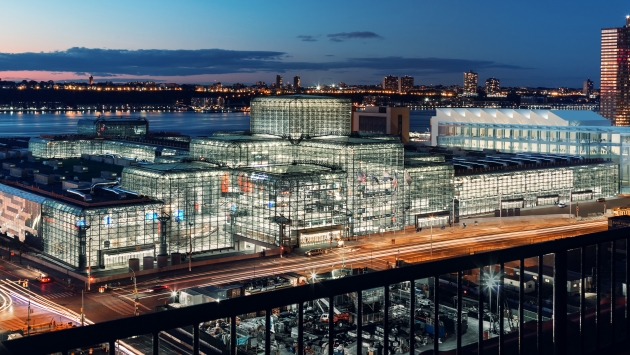 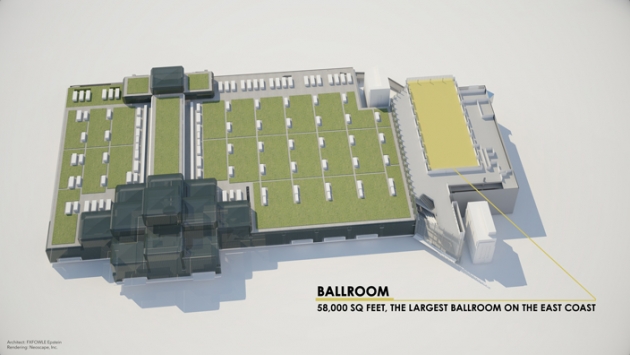 The proposal will expand the Javits Center by 1.2 million square feet, resulting in the largest ballroom in the Northeast. 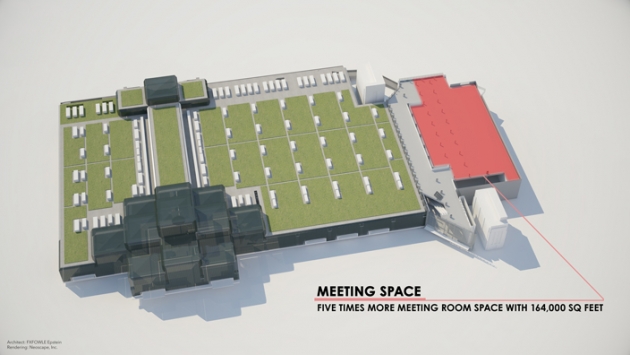 The Javits Center will rival any similar venue across the nation by providing a host of unique meeting spaces that will entice businesses from around the world.

“The Javits Center was constructed to create economic opportunity, and by reinvesting in this iconic facility, we are ensuring those opportunities continue for years to come,” said Howard Zemsky, President, CEO and Commissioner of Empire State Development. “Through this expansion project, we will significantly increase the efficiency of operations at Javits and attract more events and support the local tourism, hotel and restaurant industries.”

“Manhattan’s West Side has become New York’s next great neighborhood, and this project capitalizes on the worldwide draw of this area,” said Henry Silverman, Chairman of the Board of Directors for the New York Convention Center Operating Corporation and the New York Convention Center Development Corporation, which own Javits and are responsible for all capital improvements and expansion projects. “With 500,000 square feet of contiguous exhibition space on one level, the Javits Center will rival any similar venue across the nation, providing a host of unique meeting spaces that will entice businesses from around the world to unveil their latest innovations here.”

“For nearly 30 years, the Javits Center has supported thousands of jobs for New Yorkers, and the Center’s expansion will create thousands more for tomorrow,” said Alan Steel, President and CEO of the New York Convention Center Operating Corporation. “Every event held at Javits strengthens New York’s economy, and with more exhibition and meeting space, this one-of-a-kind facility will realize its true potential as an economic generator. With a new truck marshaling facility on site, events can move in and out faster than ever before, saving our clients time and money and reducing the number of trucks on the streets.”

New York Hotel and Motel Trades Council President Peter Ward said: “New York is the best city in the world, and there is no reason we shouldn’t have the best convention center to compete with other markets when it comes to attracting world-class events that will drive hotel demand and bring more long-term guests to this city. I’ve worked in the NYC hotel industry for 35 years and I can tell you unequivocally, this is a very important moment in the history and the future of our industry. I want to thank Governor Cuomo for having the clear vision and strategic sense to meet yet another seemingly intractable challenge head on by bringing all stakeholders together and finding a winning solution for everyone involved.”

Senator Brad Hoylman said: “I heartily congratulate Governor Cuomo for having the vision to significantly expand and further modernize the Javits Center, the crown jewel of New York City's tourism and trade sector. I'm looking forward to working with the Governor, my West Side government colleagues and Community Board 4 in bringing these important and ambitious plans to fruition."

Assembly Member Richard Gottfried said: “The Javits expansion is an opportunity to bring additional business to New York City, improve public safety by removing trucks from the streets and creating a cleaner environment," said Assembly Member Richard Gottfried. "I look forward to working with Governor Cuomo, the City and community stakeholders to plan and build a bigger and better Javits Convention Center."