Solicitations Being Issued to Developers This Week, Due Back in 90 Days; Groundbreaking Targeted for This Year

Governor Cuomo unveiled the sixth signature proposal of his 2016 agenda: transform Penn Station and the historic James A. Farley Post Office into a world-class transportation hub. The project, known as the Empire Station Complex, will feature significant passenger improvements, including first-class amenities, natural light, increased train capacity and decreased congestion, and improved signage to dramatically enhance the travel experience. The project – which is anticipated to cost $3 billion – will be expedited by a public-private partnership in order to break ground this year and complete substantial construction within the next three years.

The original Penn Station first opened in 1910, and its underground areas have remained in continual use since then. In its current form, the station is designed to accommodate 200,000 daily passengers. In practice, it is the busiest train station in North America, serving more than 650,000 passengers every day, and is plagued by widespread pedestrian congestion and outdated facilities. The Governor’s proposal will address these current shortcomings and transform the facility into a modern, iconic gateway to New York that is capable of meeting the demands of increased ridership in the 21st century.

“Penn Station is the heart of New York’s economy and transportation network, but it has been outdated, overcrowded, and unworthy of the Empire State for far too long,” said Governor Cuomo. “We want to build Penn Station to be better than it ever was, and that is exactly what we are going to do. This proposal will fundamentally transform Penn Station for the 21st century, and we are excited to move forward with the project in the days to come.”

The Governor discussed the Empire Station proposal at an event today in Madison Square Garden. The proposal is described below.

Penn Station Redevelopment: The existing Penn Station facility, which lies beneath Madison Square Garden and between 7th and 8th Avenues, will be dramatically renovated. The project will widen existing corridors, reconfiguring ticketing and waiting areas, improve connectivity between the lower levels and street level, bring natural light into the facility, improve signage, simplify navigation and reduce congestion, and expand and upgrade the retail offerings and passenger amenities on all levels of the station. The new station will include Wi-Fi, modernized train information displays and streamlined ticketing.

Several design alternatives will be considered, including major exterior renovations involving 33rd street, 7th avenue, 8th avenue, and/or Madison Square Garden Theater. Renderings of all of these options are available in the Governor’s presentation here.

Farley Post Office Redevelopment: As part of the Governor’s proposal, the Farley Post Office, which sits across 8th Avenue from Penn Station, will be redeveloped into a state-of-the-art train hall for Amtrak, the new train hall, with services for passengers of the Long Island Rail Road, New Jersey Transit and the new Air Train to LaGuardia Airport. The train hall will be connected to Penn Station via an underground pedestrian concourse, and increase the station’s size by 50 percent. At 210,000 square feet, the train hall will be roughly equivalent in size to the main room at Grand Central Terminal. The new facility will offer more concourse and circulation space, include retail space and modern amenities such as Wi-Fi and digital ticketing, and feature 30 new escalators, elevators and stairs to speed passenger flow. The Governor’s proposal also calls for an iconic yet energy-efficient architectural design.

A rendering from the inside of the proposed train hall is available here.

Public-Private Partnership: The simultaneous redevelopments will be advanced by a public-private partnership on an unprecedented scale, resulting in one holistic and interconnected world-class station. Solicitations to developers will be issued by the state (which owns the Farley Post Office) and Amtrak (which owns Penn Station) this week. Responses are due in 90 days.

The construction cost is expected to be in excess of $3 billion, including $2 billion to redevelop Farley and Penn into a world-class transportation hub and at least $1 billion for ancillary retail and commercial developments between 7th and 9th avenues. $325 million of this will come from government sources, including USDOT, Port Authority and Amtrak. Nearly all of the work will be funded by private investment, in exchange for an interest in the long-term revenue stream generated by the retail and commercial rents. 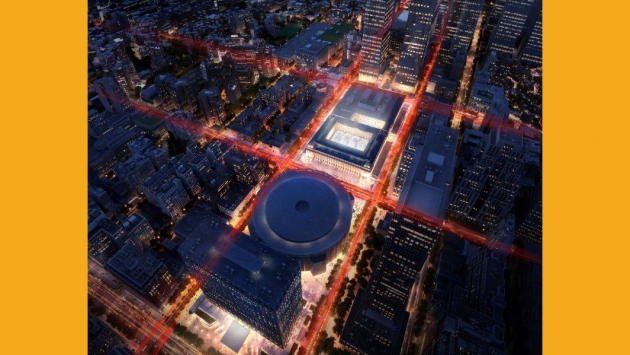 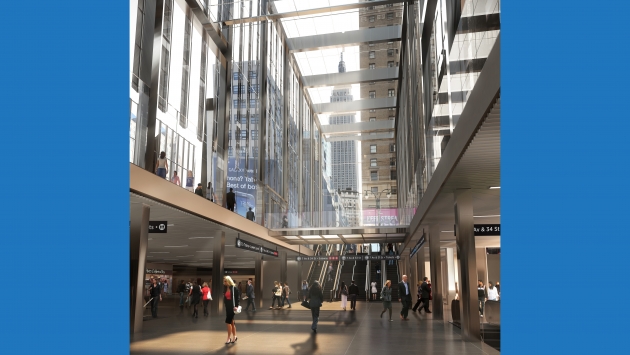 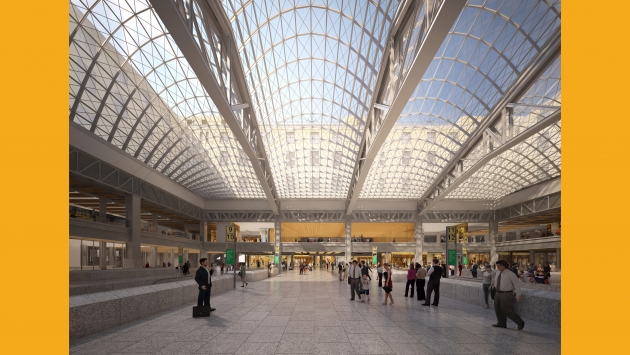 The Farley Post Office, which sits across 8th Avenue from Penn Station, will be redeveloped into a state-of-the-art train hall for Amtrak.

In light of years the public has waited for this important infrastructure upgrade, work will be expedited, with completion expected in the next three years, and Farley opening before Penn Station’s redevelopment is finished. State and federal environmental review has already been completed on redevelopment plans for the Farley Building, clearing a major hurdle and lining the project up for work to begin.

The redevelopment builds on work already underway beneath the Farley Building, in which construction of the lower concourse and underground connections to the subway and Penn Station is on budget and on schedule, for completion in the fall of 2016. With the structural steel completed in January 2015, more than 300 workers are now on site each day fitting out the new commuter concourse west of 8th Avenue in preparation for its opening next fall. Renovations to Penn Station and redevelopment of the Farley building are expected to begin after that work is completed.

The new complex will also lay the foundation for a further expansion south, connecting to the Gateway Project.

Amtrak President and CEO Joseph Boardman said: “Amtrak appreciates Governor Cuomo’s leadership, vision and commitment to the expansion of passenger rail capacity here in New York. We’re proud to work closely with the Governor, the Empire State Development Corporation and others on his team to help lead a rail renaissance in Manhattan. With the development of Moynihan station as Amtrak’s new intercity train hall and the pursuit of Penn Station improvements for the hundreds of thousands of daily commuters that use our facility, we are setting the stage for the future expansion of rail service and ridership that will be made possible by the Gateway Program.”

Senator Brad Hoylman said: "Under Governor Cuomo’s ambitious proposal to transform Moynihan Station into a modern transportation hub, no longer will commuters have to scuttle into our great city like rats, as the Yale architectural critic Vincent Scully memorably wrote after the demolition of the old Penn Station in 1963. Not only will the Governor’s plan correct this historic wrong and create a train station worthy of the city it serves, but a new Moynihan Station will be a key driver for economic development in the entire Metro Region. I thank Governor Cuomo for his bold vision to redevelop Moynihan and look forward to working with him to make it a reality."

Senator Adriano Espaillat said: "Penn Station is in dire need of a complete overhaul and Governor Andrew Cuomo's plan to remake this vital terminal into a 21st century transportation hub is the right approach. I look forward to working with the Governor to bring a better experience to the hundreds of thousands of New Yorkers who use Penn Station every day. I am very pleased to see this important protect get on the right track."

Assembly Member Richard N. Gottfried: “I welcome Governor Cuomo’s effort to get the project moving again. The redevelopment of Penn Station and Moynihan is extraordinarily complex, both physically and organizationally. It will have substantial impact on the surrounding area, including pedestrian and vehicle traffic and land use. In addition to all the on-site transportation entities, it is crucial that the surrounding community and the City be actively involved in the planning.”