Individuals with criminal convictions continue to face significant economic and social barriers to their successful reintegration into society. On average, New York State releases more than 25,000 people from prison each year and research shows that without successful re-entry policies, there is a higher rate of re-convictions.

More broadly, one in three Americans has some form of a criminal background, which poses challenges to gaining employment, finding housing, and participating in the world around them.

In July 2014, Governor Andrew M. Cuomo announced the formation of the New York State Council on Community Re-Entry and Reintegration to identify and alleviate obstacles that individuals with criminal convictions face upon re-entering society in New York. The Re-Entry Council, made up of leaders of reentry organizations, District Attorneys and defender organizations, leaders from academia and the private sector, and formerly incarcerated individuals, promotes problem-solving and collaboration in reducing barriers affecting people with criminal convictions. The Council makes recommendations for policy, regulatory and legislative change. Since 2014, the Governor has accepted several of the Council’s recommendations. Here are some highlights that show how these changes have affected New Yorkers. 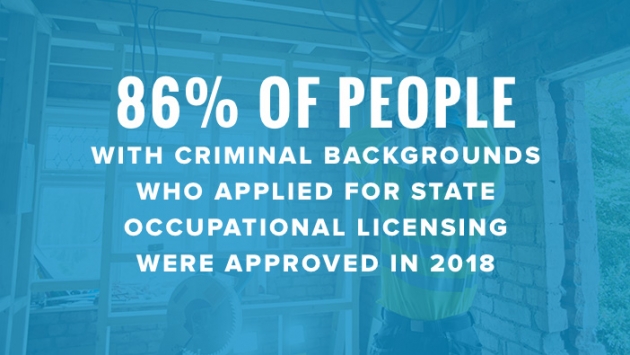 86% of people with criminal backgrounds who applied for state occupational licensing were approved in 2018. 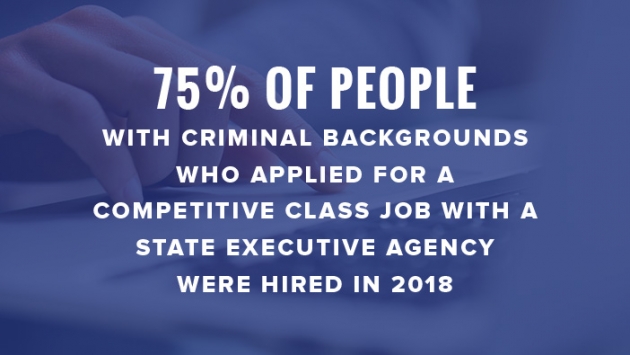 75% of people with criminal backgrounds who applied for a competitive class job with a state executive agency were hired in 2018. 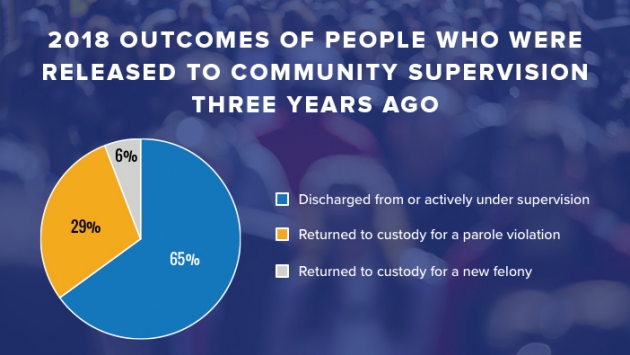 2018 outcomes of people who were released to community supervision three years ago.

67,291 people on community supervision have received a voting rights restoration pardon to date. 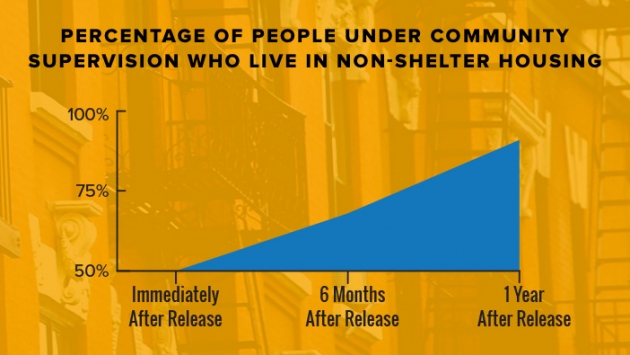 Percentage of people under community supervision who live in non-shelter housing.

Achievements made by the Reentry Council in the field of employment include:

Outright Bans Removed from all Licensed Occupations other than Law Enforcement or Security: A few occupations still had outdated bans on people convicted of criminal convictions being able to get licenses at all; these included real estate brokers, insurance adjusters and notary publics. As of April 2019, new legislation removed these bans, and applicants are to be given the individualized consideration required by New York's anti-discrimination statute.

Work for Success Employer Pledge: The Governor created the Work for Success pledge in April 2017 for New York State employers to publicly commit to considering individuals with conviction histories for employment in their companies. Over 100 companies from various sectors have signed on thus far, including Staples, Xerox, WeWork, Vice Media, Target, Georgia Pacific, and Ben & Jerry’s. The Governor hosted a pledge event at Vice Media in July 2017 featuring a panel discussion of employers who actively hire individuals with criminal convictions. The employers, along with the Lieutenant Governor, Secretary of State, and Counsel to the Governor joined together to encourage other companies to join the Work for Success initiative. For more information on the Work for Success Pledge, including which New York employers have made the pledge, and how to sign your company on, please click here.

“Fair Chance Hiring” for New York State Agencies: Applicants for positions in executive agencies are not required to discuss or disclose information about prior convictions until and unless the agency has interviewed the candidate and is interested in hiring him or her.

Uniform Guidelines That Evaluate Qualified Applicants for State Occupational Licenses: The Governor instituted Guidelines in 2015 to create a presumption towards granting an occupational license, such as for a barber or a paramedic, unless an individualized assessment of an applicant’s criminal record found that person to be unsuitable for that license under New York’s anti-discrimination statute governing licensing and employment.

First in the Nation Regulation that Prohibits Insurance Companies from Denying Insurance Coverage to Businesses that Hire People with Criminal Convictions: Over 2.3 million people in New York have a criminal conviction on their record and employment is one of the strongest indicators of successful reintegration for these individuals. In order to remove a barrier to employment for the justice involved population, this regulation ensures employers are able to obtain insurance coverage, provided that they considered a set of factors outlined in New York State law (Article 23-A) governing the hiring of people with criminal convictions.

Increased vocational training: The Governor has worked with the Department of Corrections and Community Supervision to connect in-prison trades training to growing job fields in the community, including a cosmetology training program that results in the opportunity to obtain a New York State occupational license in appearance enhancement, all from prison. Training in the culinary arts has also been expanded, as well as green industry trades, namely solar panel repair. With this training and the resulting credentials, individuals will make themselves more desirable candidates in the job application process.

Criminal Record Reports or "Rapsheets" Given to Employers Report Only Criminal Convictions and Pending Arrests: A series of rapsheet reforms enacted as of April 2019 remove arrest charges not leading to a conviction. The rap sheets now report only actual convictions and pending arrests to potential employers, the only information that employers can lawfully consider when hiring.

Achievements made by the Reentry Council in the field of housing include:

New Legislation Outlawing Private and Public Housing Discrimination based on an Arrest Only: As of April 2019, an arrest record that does not include an actual conviction is not a legal or acceptable reason for discrimination/denial of access to housing of all types, public and private.

Anti-Discrimination Guidance for New York-Financed Housing: In 2015, the Council issued guidelines to forbid housing discrimination based on an individual’s conviction alone and require housing operators to conduct individualized assessments of applicants to ensure adequate housing for these individuals.

Increased Housing Opportunities for People with Criminal Convictions: The Governor funded case management support services in 2017 to enable people returning from prison to reunite with their families living in public housing facilities in Schenectady, Syracuse and White Plains, in a pilot to provide greater opportunities for safe, cost-effective housing options for the reentry population.

Increased Opportunities for Individuals Leaving Prison to Live with Spouses and Partners: Recognizing that returning to families and loved ones is the most affordable and humane route to reduce homelessness and increase stability after release, the Governor instituted a new policy in 2015 to allow people to live with spouses and partners as long as an individualized determination finds no indices of domestic violence involving those partners. A prior policy made it unintentionally difficult for some people to live with partners with whom there was no history of abuse or criminal activity.

Including the Formerly Incarcerated as a Target Population for Supportive Housing: In 2015, Governor Cuomo expanded the pool of eligibility for the Empire State Supportive Housing Initiative to target homeless individuals leaving prison. This initiative to build 6,000 new units of supportive housing in New York over five years better enabled this population to find suitable housing as they transition to their communities. Formerly incarcerated individuals had not been previously been a targeted population for these funds.

Achievements made by the Reentry Council in the field of education include:

“Ban the Box” for SUNY Admissions: The SUNY Board of Trustees voted on September 14, 2016 to remove prior convictions from consideration to admission to SUNY schools, although schools will inquire about convictions for students seeking campus housing or participation in internships, clinical experiences and study abroad. This action removed a significant barrier for individuals previously involved in the justice system that was not associated with campus safety.

College Education Expansion in Prison: In 2017, the Governor partnered with the New York District Attorney’s Office to award $7.3 million in funding to provide an additional 2,500 seats in 17 correctional facilities for college-in-prison classes over five years.

Specialized Education Expansion for People with Learning Disabilities in Prison: The Governor has increased small group and individualized instruction for adult students in prison with learning difficulties that cause them to struggle in the academic setting. As a result of this program, the number of people who leave prison with a high school credential has increased.

Achievements made by the Reentry Council in the field of civil rights include:

Classifying Arrest and Booking Photographs - "Mugshots" - as Private, Non-Disclosable Information under Freedom of Information Laws: This new April 2019 legislation bars governmental sharing of mugshots as an unwarranted invasion of personal privacy, unless there is a specific law enforcement reason for disclosure.

Sealing Non-violent Convictions: In April 2017, Governor Cuomo signed legislation to allow individuals with up to two nonviolent convictions, including one felony, to apply to the court to have their records sealed for civil purposes, such as background checks for employment and housing. To qualify, applicants must have no new convictions for ten years from the time of the latest conviction or release from prison following such conviction, whichever is later. From the effective date of this legislation through the end of 2018, over 800 individuals have had almost 1,000 convictions sealed. This represents a major step forward for New York, which previously only allowed criminal record sealing for juveniles and people who completed drug treatment under provisions of the Rockefeller drug law reform.

Voting Restoration Pardons for Individuals Under Community Supervision: In April 2018, the Governor issued Executive Order 181, which states that individuals under community supervision will be given individualized consideration for a conditional pardon to restore their voting rights. On May 21, 2018, the Governor issued the first group of 24,086 pardons to individuals who were released from prison and are living successfully in the community under supervision. This pardon review and issuance process continues on a rolling basis.

Achievements made by the Reentry Council pertaining to release from prison include:

To learn more about the clemency process, please click here.

NYS Department of Corrections and Community Supervision Reports and Publications

Governor Cuomo Issues First Group of Conditional Pardons Restoring the Right to Vote to New Yorkers on Parole; May 22, 2018

Governor Cuomo Announces Job Summits to Support Re-Entry Professionals That Assist Formerly Incarcerated Individuals as They Rejoin Their Communities; May 8, 2015